Photo contributed The six by sixteen foot mural created by Brandon and Kristin Long combines elements from artwork made by the students of Castle Tower Special School in Northern Ireland.

Brandon and Kristin Long of Danville were given the opportunity of a lifetime when they were offered a two-week trip to Ireland, made possible by the collaboration of the Sister Cities Commission of Danville and the Mid and East Antrim Council of Ireland.

Brandon is the creative director of Danville’s Community Arts Center and Kristin teaches art at Garrard County High School. Their trip was led by their two hosts, Rosalind Lowry who leads students traveling abroad, and Joe Rocks, an employee at the Ireland equivalent of the Danville Community Arts Center.

The couple’s primary focus during their trip was working with Castle Tower Special School in Northern Ireland. The $20 million school was built for kids with moderate to complex special needs. Castle Towers is one of five state-of-the-art special needs schools in the United Kingdom, and is the largest of the five facilities. 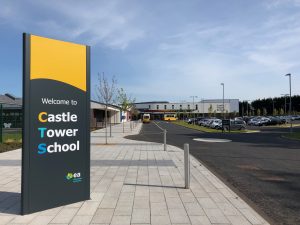 Photo contributed
Castle Tower School is the largest of the five facilities in the United Kingdom dedicated to students with special needs.

“Castle Towers is unique in that it provided a separate space for students with special needs,” Brandon said. “It is kind of different from the way we approach it in the United States. On our visit, it seemed to us to be a very effective means of addressing those students.”

The school requires a doctor’s recommendation to attend, and is home to 400 students aged 3-19. The floorplan of the building includes different wings for the various age groups, as well as sensory rooms and special mood lighting. Every room at Castle Towers also includes a balcony that allows students to direct sunlight and fresh air.

Prior to their trip, Brandon and Kristin posed a task to some of the students of Castle Towers. The two asked students to provide a drawing of what makes their community great. Teachers then collected the best ones, scanned them and emailed them to the couple.

“I cut out all of the individual interesting parts and then I recombined them to create a big scene,” said Brandon. Then, the pair used a projector to shoot the images onto panels in order to reproduce them exactly as they had been drawn. 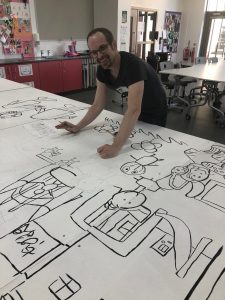 “We found out all kinds of things about Northern Ireland before we went over there based on these pictures,” Brandon said. “There was a place called poundland that we were very curious about.”

Upon their arrival, they discovered that poundland is the Irish equivalent of the dollar store. “We learned that the kids absolutely love that place because just about everything in there was a pound or our equivalent to a dollar.”

“There were bouncy castles in there and ponies and puppies. There were all kinds of these things in these drawings that really let us know about these students,” he said.

They also received many drawings involving soccer, known as football there.

Kristin said in Northern Ireland, sports, politics and religion are all interlaced. Using certain colors could act as a trigger or evidence as to one supporting a certain political campaign or group. The Longs ended up painting the football teams on their mural with variations of blue paints.

“They didn’t resemble anything or any real teams. We gave them generic names and we didn’t want to incite any kind of violence with supporting one side or another,” said Brandon.

During the painting process, the two recruited older students of Castle Towers to help them paint. Brandon and Kristin had outlined the entire mural as a coloring book, with each section labeled with the appropriate color it needed to be painted.

Brandon said teachers expressed concern that inviting students to help might not be a wise decision due to some students having short attention spans, as well as other problems that may affect their ability to work. This turned out to not be a problem.

“I was amazed. They blew through almost all of the painting that needed to be done like in one day. In one day they had the entire thing painted,” he said.

The full process took three days, four including a presentation. “The school gave their assembly time to us so Brandon did a presentation about who he was and we presented the mural to the school because not everybody had the opportunity to work on it,” said Kristin.

The four-panel mural was 6-by-16 feet when finished. Its final location has yet to be determined, but the school is debating between two different potential areas.

The mural was only a small portion of their entire trip. The Longs truly became engulfed in the culture and were provided with many opportunities. 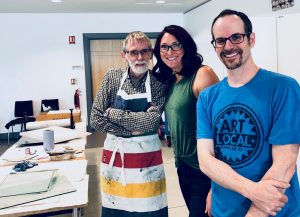 Photo contributed
Brandon and Kristin Long pose alongside artist Maurice Orr during their printmaking workshop at The Braid.

They also had an uncommon experience with a former mayor of the council, Audrey Wales. “Getting to go to somebody’s house over there is a huge deal. Typically you don’t get invited to go into people’s homes,” said Brandon.

The couple was invited to visit Audrey Wales at her home during their trip, which was an experienced Brandon encompassed as “incredible.”

“What they were doing was they were taking these stories that people had collected and gathered and combining them to create this big musical, theatrical, dance presentation performance,” said Brandon.

The couple played a part in the musical element of the performance and attended a meeting in which they  helped write song lyrics. Brandon said the people who were working on the project gave him a new perspective. 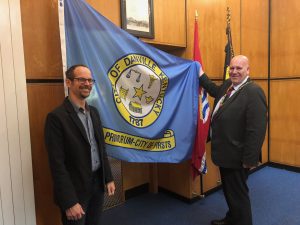 Photo contributed
Brandon Long stands alongside the City of Danville flag and Mayor of the Mid and East Antrim Borough Council, Paul Reid, after attending the mayor’s reception in Carrickfergus.

The workshop took place at The Braid, Northern Ireland’s new Museum and Arts Centre. “It’s sort of akin to our Community Arts Center, but it’s built around their city hall so they have their city hall with all of the official city buildings and then they’ve built a modern art museum onto the back end of it,” Brandon explained.

Brandon and Kristin also participated in a printmaking workshop where they learned about the process used to make a series of art displayed in one of the exhibits at The Braid. “We really got to be a part of their little arts scene. By the end of the two weeks we would run into people in the mall that we knew,” Brandon said.

Kristin worked on a project called “The Processions.” The project celebrated 100 years or women’s voting and the suffragette movement in the United Kingdom.

“The Braid got one of the 100 banners that were accepted to create a banner for a huge march they had June 10,  and I got to help sew on the banner,” she said.

On June 10, the banner was paraded in Belfast. Now, the banner is part of a tour in the United Kingdom.

The two also took part in Ireland’s public art scene. They visited all of the peace murals in Belfast. Brandon said the public art scene in Ireland is unique. Ireland takes liberty in having a wide license, and a lot of the art was highly politicized, he said.

“They made murals that I’m sure the people of Danville wouldn’t want anything to do with.”

Background is important to understanding the public art they witnessed.

“You have to understand that they’re coming from this big series of troubles where people were just battling it out in the streets, literally killing each other,” Brandon said. “The fact that they get to say what they want to say in this little strip of wall means that that conversation is still ongoing.”

“They made those murals knowing that they weren’t going to last, which I think is important and people need to understand about public art,” Kristin said. “I like that they are conscious that it’s an ongoing conversation.”

The Longs also attended a hurling match in Ireland, at the urging of their hosts. Kristin was impressed by the sport and fascinated by the arena. 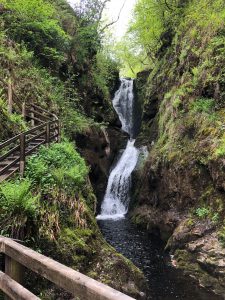 Photo contributed
One of the many waterfalls Glenariff has to offer flows alongsize a staircase and greenery.

“You can see references to all of our sports in this sport,” she said. “But the field is longer than a football field and they have soccer goal type structures on either end.”

She described the equipment used in the game as a wooden hook stick and the ball as the size of a baseball, but “carried like an egg on a spoon.”

“They pop it up and down on the stick, hit it like a golf ball off of the ground, put it in the air and hit it like a baseball. It was insane, it was like all the sports combined.”

On the couple’s last night in Northern Ireland, May 25, they took a trip to Arthur Cottage, the home of President Chester A. Arthur. The president took office after Garfield died, and his home and presidency is regarded with great pride.

“Overall, our trip was phenomenal,” Brandon said. “We want to thanks the Sister Cities Commission of Danville and the Mid and East Antrim Council of Ireland as well as the many others who supported us (financially and emotionally) for this great op portunity.  It was a once-in-a-lifetime opportunity and we couldn’t have done it without them.”