Rivals to roommates: Tanner Ford, Jason Alexander set to team up at Midway 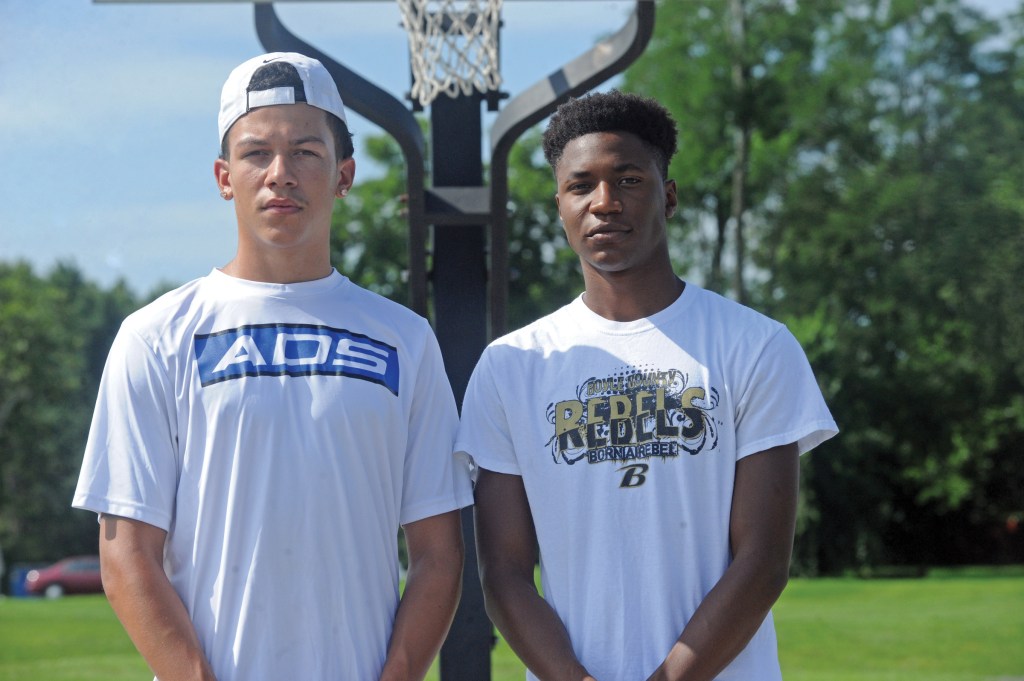 They’re about to know each other a lot better.

The two basketball guards will go from competing against each other as crosstown rivals to teammates at Midway University next year.

“Everybody thinks that because we beefed on the court that we hated each other, but outside of basketball we were always cool,” Alexander said. “It’s not like we had bad blood or anything, it’s just a rivalry game and we guarded each other. When we played, there was trash talk, but outside of the court we never had an issue. So for us being roommates, that was a no-brainer.”

Their path to Midway was a bit different — Ford knew through high school that he wanted to play in college. He put himself out there through Next College Student Athlete, or NCSA, as a way to attract interest. That’s where Midway coach Joe Krupinski found him and messaged him to visit the school.

“He said he wanted me to come visit. I went up there, saw how it was up there and I liked it,” Ford said.

Alexander was different: He received interest as a junior from colleges but an offseason shoulder surgery stalled that interest and he thought about not playing basketball at the next level.

“I wasn’t going to play basketball in college, the whole season I wasn’t really talking to any coaches about it. Junior year I was talking to some, then when I had shoulder surgery they kind of fell off. (Boyle coach Steve Adams) was talking to me about it, talked with my family and I said, ‘might as well.’ I don’t want to look back and say, ‘man I wish I kept playing.’ Plus with the way the season ended, I didn’t want to go out like that.”

The two will be joining a program that started in 2016 and went 7-20 last season.

“That’s one of the reasons that I wanted to go there, if we are there for four years, they’ve not had a winning season yet so I want to go there and help put the program on the map,” Alexander said. “Nobody’s worried about Midway right now. I think going there, one of my goals is to get Midway’s name out there. I hope by the time we graduate we’ll accomplish something there.”

Both players handled the point guard role in high school, so who’s going to play there in college?

“I’ve ran with them and stuff, I think he’s going to be the one and I’ll be on a wing,” Ford said. “We’re both good athletes and can play either spot.”

It’ll be a different experience for both, rooting for their rival over the past four years. In high school, the two went toe-to-toe 12 times, with Alexander and the Rebels winning 11 of the 12 meetings.

“That being said, he can’t guard me,” Ford laughed. “I wasn’t on him, I was on Bryce (Slone). For me, I don’t like losing. He was my rival and now he’s my roommate, so we’re rooting for each other … He has the ugliest jump shot that I’ve ever seen. But it goes in. He handles the atmosphere, the pressure well. He’s a good point guard, he’ll be a good point guard at the next level.”

Alexander said Ford will bring it with his competitiveness and knowledge of the game.

“He’s good at controlling the tempo, the pace of the game,” Alexander said. “He knows the offense and he can be the floor general type. He’s the traditional type that can control the tempo. We’re both guards but we have different games and I think that will mesh well.”

Through high school each player had different experiences in building programs — which they’ll certainly be helping with at Midway. Both players said that the sports they played in high school prepared them for the next level.

“I like being the underdog because you’re counted out, that’s extra motivation to go out there and beat someone,” Alexander said. “I think my coaches prepared me, mentally and physically. My sophomore year till now, I’ve grown a lot and I think that’s credit to the coaching staff, I think they prepared me the most. They were hard on me and I feel like that prepared me for anything.”

Ford added that juggling multiple sports — he played football, basketball, track and baseball while at Danville — helped him stay on top of schoolwork.

“We had faith during football with coach (Clay) Clevenger, we have faith in the Midway coach now. I hope we come along like we did with football,” Ford said. “I’ve played four sports, football basketball baseball and track. I know how to balance school and sports, I think that’ll help.”

For both players, their parents helped them along the way.

“My mom, she’s raised me to be who I am,” Ford said. “I want kids some day and she’s taught me how to be a parent. Me and my dad work out every morning at 8:30 and without him being my workout partner, I wouldn’t be as athletic or as efficient in sports in the sports that I play.

Alexander said his parents helped him be more independent.

“They allowed me to make the choices,” Alexander said. “They gave me the freedom and I feel like I know what consequences come from bad choices, so them giving me that freedom will help me at Midway.”