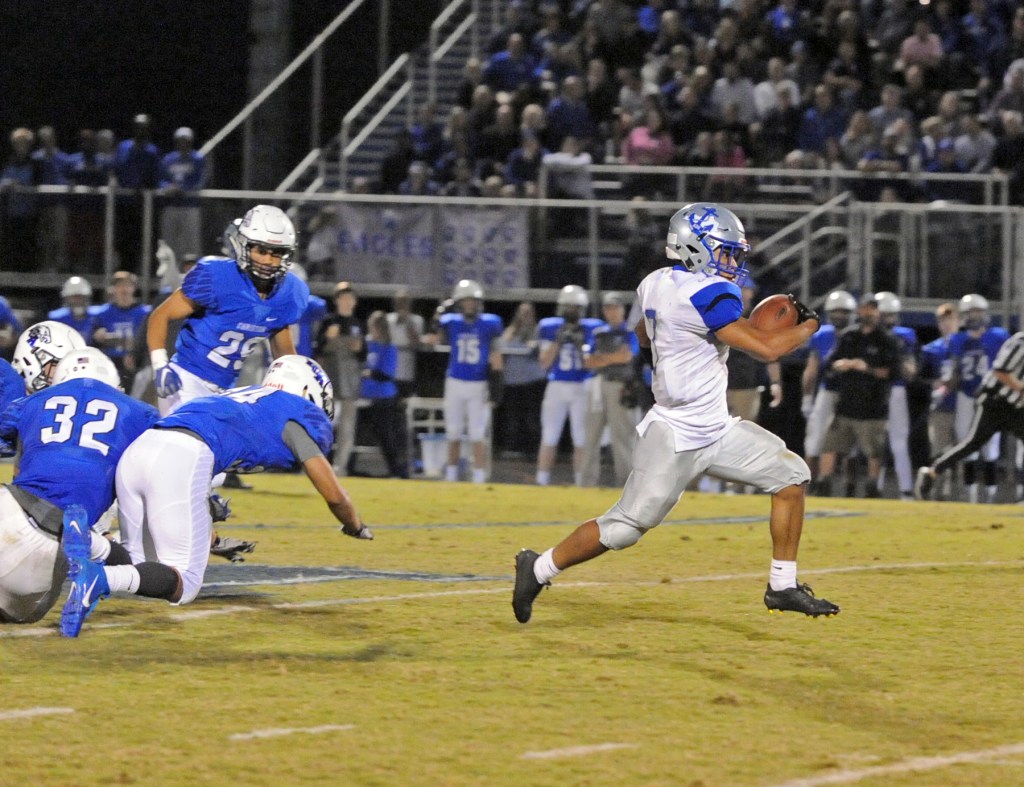 Athlete of the Year.

D’Mauriae VanCleave did what has never been done at Danville High School during the 2017-18 season.

He’s the first ever Mr. Football in Danville’s storied football history. He also won the 100 meter dash, anchored the 4×100 meter relay and placed second in the boys 4×200 meter relay at the state track and field meet, en route to another state championship.

“The motivation coming into the year was to do my best as an individual and to make my team better,” VanCleave said. “Nobody could really say that all of this was going to happen at the beginning of the year, no one could see that we’d be two-time state champions in one year. It’s just a blessing. We just worked hard and it paid off, I feel good now going into college. Everything is coming out right.”

VanCleave finished his high-school career with 4,329 combined rushing and receiving yards and 73 total touchdowns. On the track, he capped his senior season with two state titles and a team state championship.

“He’s just a special talent. He’s one of those athletes that only come around every so often,” Danville track and field head coach Chris Verhoven said. “He just has an amazing amount of God-given talent. But what gets overlooked by a lot of talented people, what makes the difference is that he works hard. He couldn’t be where he is without one or the other. He’s super talented but he doesn’t rest on his laurels, he works hard to become the athlete that he is.”

Danville head football coach Clay Clevenger said it was clear from an early stage just how special VanCleave was as an athlete.

“I think he always had the athleticism to be a special type of athletic talent, really from the first time I saw him in eighth grade,” Clevenger said. “Mentally, I think he put it all together this year to have the year he had in football and in track.”

VanCleave said that mental hurdle was the toughest for him to overcome during his senior season. The Admirals came up just shy of a state championship in 2016.

“I feel like the toughest thing for us as a team was to come back off of last year, getting so close to the state championship,” he said. “We had to come back and the coaches were telling us to trust the process. We felt like we did the same thing last year, but we just had to trust what they were saying and go harder than last year.”

VanCleave is a unique athlete because of his confidence: Those close to VanCleave wouldn’t describe him as ultra-confident, but he is driven by what Verhoven calls a “fear of not being the best.”

“Maybe that’s what drives him. People think that superior athletes are, professional or D-I, they’re just super confident,” Verhoven said. “And I think a lot of them are not. I’d put him in that category I believe he has every reason to be, but I think there’s always that fear of failure, fear of not being the best. You question yourself and I think that drives him to be better. He has enough doubt to know he has to work hard to make sure he doesn’t get beat. He’s super, super competitive, more than he is confident. He’s just a competitor. He hates losing as much as any kid that I’ve been around.”

At the region track and field meet, VanCleave breezed past the competition with an 11.09 time in the 100 meter dash.

He said after that race that he’d be breaking 11 seconds at the state meet in a week.

“You’ve got to set a goal to go get it, so I always try to set it a little bit higher than I think I can reach,” VanCleave said. “I just try to set goals and beat that goal. You’ve always got to have that high expectation.”

On the football field and on the track, VanCleave was a leader. Other athletes wanted to know what Mr. Football was doing.

“He’s definitely a young man that people follow,” Clevenger said. “The kids were always drawn to him. That was one thing as a coach you had to understand, you needed D’Mauriae to be on his game because a lot of kids drew confidence from him. I think that’s what made us go to the next level this year from a football standpoint, especially in the last half of the season. He elevated his game, and when he did that, you saw a lot of others elevate their game. That’s one of those things, you don’t have to be the rah-rah guy, you just have to show up and work hard every day.”

Verhoven saw the same this spring.

“He’s the other kind of leader — Don Harris is the cheerleader, rah rah, get up in your face and get everybody hyped up. That’s the opposite of D’Mauriae,” he said. “He won’t get in his teammate’s face, he’s not going to have a speech. But the kids just absolutely idolize him. They follow his lead. They recognize him for his talent, but he’s a natural-born leader. They just follow his example, his lead. Because when he decides he wants to do something, he has that ultra-confidence and he works extremely hard. When he puts his mind to something, he does it. He’s the definition of lead by example.”

Now, VanCleave will have a different kind of competition at the Division-I level in South Carolina.

“Going into college, Division I, there’s a lot of competition everywhere on the field,” VanCleave said. “Everyone is fighting for playing time. You’ve got older guys that have been there that won’t let younger guys come in and play. There’s a lot of young guys on the team like myself that coaches think will be able to play first year. Coming in, I want to contribute to the team offensively, special teams, any way I can and do the best that I can to better myself as a player.”

“He’s doing well so far, talking to him he’s been enjoying it,” Clevenger said. “He was down for the month of June, basically. He’ll be back next week, working hard. But the coaches tell me that he’s doing really good right now, gelling in pretty good and I think he’s really enjoying it.

“Sometimes the biggest thing is getting kids out of Danville and let them see other opportunities. From what he’s told me, he’s already doing that at Wofford. What people don’t realize about Wofford, Wofford is a top eight FCS program in the country. They’ve been in the playoffs, been in the finals and they’re a really respected program throughout the country. It’s going to be a good fit, I think he’s going to get a great education and he’s going to turn a lot of heads. He’ll get the opportunity to play in some big-time atmospheres. He’ll get the chance to showcase what he can do.”

VanCleave said his parents and coaches were instrumental in his growth as a person and an athlete.

“My coaches, when I showed them that this is what I wanted, I wanted them to help me get to the next level, they did everything that they could to better myself as a player and as a man. That tied in together with my parents and that really helped me in my high school career.”

Verhoven said that what drives VanCleave — his desire to be the best at anything — is what will make him successful in college and in life.

“He’s been questioned his whole life. ‘He’s not big enough, he’s this, he’s that.’ And I’ve already heard people this summer say the coaches at Wofford are really impressed and he’s exceeding expectations,” Verhoven said. “I think he likes that role: Try to count me out and I’ll prove you wrong. Don’t ever underestimate D’Mauriae VanCleave because he’ll always exceed the expectation. You can’t put a measurement on that, you either have it or you don’t and he has it. He has that drive that separates him. I think he’s going to use that to succeed in sports and life.”