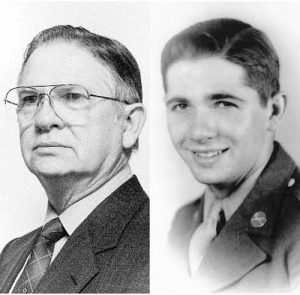 Funeral services for Clyde Lee Estes, 93, of Monroe, La., will be held at 2:00 p.m. Monday, July 9, 2018, in the chapel of Mulhearn Funeral Home, Sterlington Road, Monroe, with Rev. Lee McGlone officiating. Interment will follow at Mulhearn Memorial Park Cemetery. Visitation will be from 4:00 P.M. until 6:00 P.M. Sunday at the funeral home.

A true American, it’s only appropriate that Clyde Lee Estes should pass from this earth on July 4th, 2018. Born in Winchester, Kentucky in 1925 to Clyde Garrett Estes and Agnes McCord Estes, Lee, as he was commonly known, left Junction City, Kentucky for Monroe, Louisiana in 1956 to start work with McMahan Aviation. It was the beginning of a full life with his wife, Lottie, who would be by his side for nearly 72 years. Lee leaves two children, Connie Estes Beale, and Gary Lee Estes (Trudy); three grandchildren, Lauren Estes, Matthew Beale, and Lindsay Estes; and one great-grandchild, Brynlee Marrow. Lee was predeceased by his beloved wife, his parents and his brother, Edward Burnett Estes. Lee also had several nieces and nephews.

A soldier, pilot, photographer and tour director, Lee’s curious nature left no stone unturned. The end of a gravel road was always of interest. He touched many lives and made a host of friends along the way.

After his graduation from Junction City High School and a brief time at Centre College, he answered the call of duty to his country. His service as a foot soldier in Germany during the Battle of the Bulge resulted in a Bronze Star, and later the award of The French Legion of Honor. Time in Europe after World War II led to an interest in travel and photography. In addition to his career as a corporate jet pilot and mechanic for Olinkraft, Lee started “Tours With Imagination”, a photography skewed coach tour to off-the-beaten-path places around the globe. In the 1980’s Lee was a noted exhibition photographer, earning a spot in the top twenty in the world in salon juried shows. His guiding belief was, “First you learn to see.”

Though a transplant to Northeast Louisiana, Lee became a dedicated student of the history of the area. He documented it in both his writing and photography. As author of Faded Textures, an architectural survey of northeast Louisiana, and Faded Warriors, his firsthand interviews of WWII veterans, he educated and entertained many.

Lee was also a regular contributor to Louisiana Road Trips Magazine. One reader said his column made her “just want to go find him, pull up a chair, and listen to him tell as many stories as possible”.

At College Place Baptist Church and Parkview Baptist, he served as deacon and Sunday School teacher. At the Northeast Louisiana Veterans’ Home, his residence for the last years of his life, he continued a ministry of prayer.

Lee Estes lived life like someone who left the gate wide open. His natural curiosity led him down many gravel roads and pointed others of us in that direction.

In lieu of flowers, contributions may be made to the above endowment for which Lee worked tirelessly.