Sarah Burns does it all for Boyle County in senior year 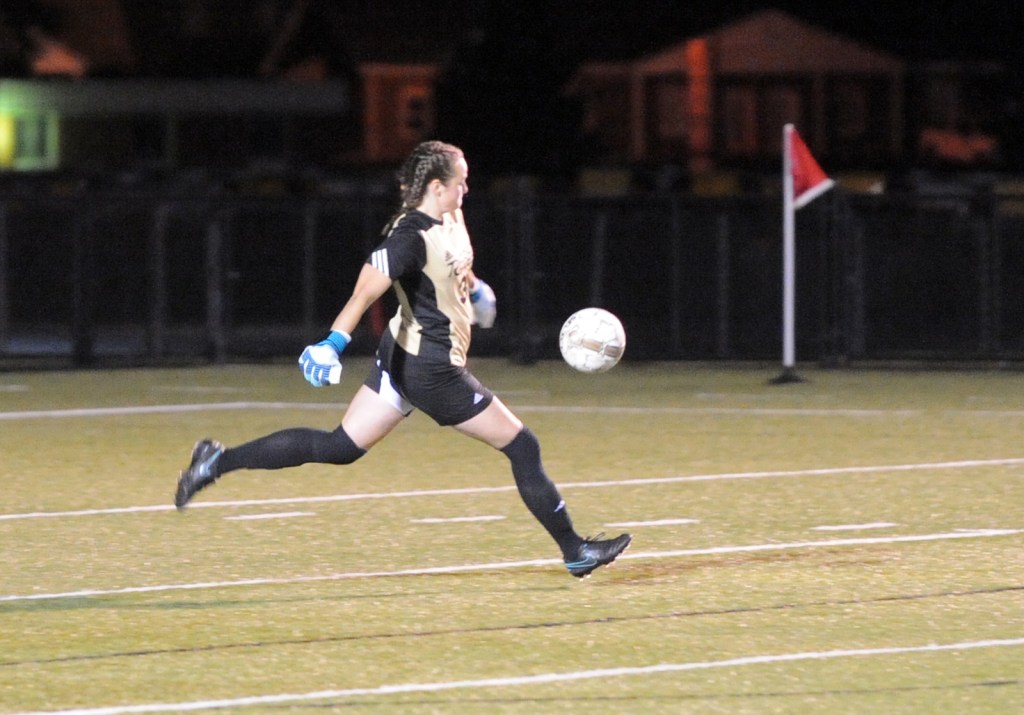 Sarah Burns is the opposite of specialized.

Burns posted 10 shutouts in net for the Boyle County girls soccer team during the fall. After (another) 45th District title, Burns moved on to swimming and diving, where she advanced to state in three events. During the spring, she’s pole vaulting for the track and field team.

Now, she’s the well-rounded Advocate-Messenger Athlete of the Year.

“I think just having the opportunity to do it all, it’s not something you get to do that often,” Burns said. “High school is probably the only time I could try all of these new things and actually get to do them. I’ve played soccer my whole life, with diving I saw it freshman year and thought, ‘oh, that looks fun.’ So I tried it, that’s kind of the same thing with pole vault.”

Burns might be best known for her work in the net for the girls soccer team — she took the job as a sophomore and didn’t look back. The team posted 25 shutouts in her junior and senior seasons.

“Sarah Burns is a special athlete,” Boyle girls soccer head coach Brian Deem said. “Not only is she athletic, the thing about her that made her so special was her personality. She’s team oriented, she understood that the program was bigger than herself. It wasn’t about accolades for her, it was going out and doing her job and being a part of something bigger. I think that’s very rare these days.”

Burns performing in multiple sports  — and performing well — only paints part of Burns’ picture. She’s also involved in dance and posted a 4.25 GPA in her senior year.

“She’s constantly doing something,” pole vault coach Damian Laymon said. “She didn’t come out for track until swimming was over. Swimming ended on a Saturday and on that Monday she was out at the track. During the season, she’d have to leave practice early to go to dance practice. She was involved in so many different things. She’s not scared to try anything, I think she just tries to make the most of every day and just enjoy life.

“During a season, she’s focused on that sport. These days, that’s very uncommon, you typically see athletes try to specialize in one area and try to be pros in high school. I thought it was refreshing to see her just come out and try new things. She wants to master everything, and I can appreciate that.”

Laymon said she was recruited to the track and field team by head coach Brent Wagner as a thrower — she has the tall build for a successful thrower — but she saw pole vault as a fun opportunity.

“She puts so much work into what she does and she’s always good at it,” Laymon said. “Her junior year of track season, she went from the end of February never touching a pole, to placing top 10 at state. She was one, I’d sometimes go out on a Sunday and she would always be there. She just always wanted to be there.”

It would’ve been another top 10 performance at the state track meet this year, but Burns didn’t hit her mark at region and failed to qualify. Laymon said she’s “automatic to eight feet,” with a personal best of 8-foot-6, a mark that would’ve been good for sixth at state.

“That was really hard because I had been pretty consistent the whole year, and I knew that if I got to state I had a good shot of earning points for the team,” Burns said. “But region was the last meet I ever had, that was really tough. I just knew I had to be there to cheer on the team, because my result didn’t really mattered. Of course it sucked and it was hard but it was more about cheering the team on and helping them perform their best. I think that’s what I was most upset about, I didn’t want to let the team down.”

Laymon said Burns was most upset about how it would affect her team at state — the Rebels won a tight race with Mercer County by 10 points.

“That was one of those nightmare scenarios, if we had 20 meets that was the one time it didn’t happen,” Laymon said of Burns missing her mark at region. “All I could say was, ‘that’s not how it was supposed to end.’ She kept to herself for about an hour, then she said she was scared that she knew the team needed her points at state. That was the first thing she said to me. By the time we were running the 300 hurdles, she was smiling, laughing, cheering on her teammates and was there when we won region.”

There’s a common denominator to what Burns does: She wants a challenge.

“Considering the types of things she does, it’s incredibly impressive,” Laymon said. “I always said that Sarah’s disadvantage was that she was so tall. With pole vault, the taller you are the stronger you have to be. I’d always wonder when Sarah would top out, and every time I thought that it was probably as high as she’d get, she’d go to another mark. She just kept working, she wasn’t going to be denied. She competes in so many different types of sports, she dances and ballet is all about grace, precision, balance, to pole vault, where it’s five seconds of pure explosiveness. She can do both.

“I think that says a lot right there. Soccer to swimming and diving then pole vault to dancing, that’s such a broad range of things that require such a unique set of skills.”

Deem agreed — he noticed her competitiveness when she first started summer practice with the high school team in eighth grade.

“I remember when she first started playing with us in eighth grade, she was going into the junior division at Centre’s camp and I went to the goalkeeping coach and said I needed her at the high school level,” Deem recalled. “Gave it a day and he said, ‘I’m moving her up. That girl has no business being in the junior division.’ For her to go into soccer, then swim and dive, then pole vault and continue with dance, recitals, do the things that she does at a high level, it’s very rare and unheard of. She’s probably one of the most underrated and unspoken athletes that Boyle has had in my 23 years at Boyle.”

Burns said she’s thankful for parental support through high school — namely her mother for driving her to every practice, recital, meet and game when she couldn’t drive.

Her coaches were also a key part to her success, she said.

“Coach Deem is really good about caring about the girls on the team, even out of soccer, when we’ve graduated, we still talk about what we’re doing, what our plans are,” she said. “Same thing with the other coaches, they just care about you and are good role models. At the same time, they hold you accountable and make sure you push yourself to make sure you can.”

It’s her attitude that will help her succeed in life, Laymon said. She’ll be attending Louisville this fall.

“I would say more than her work ethic, her attitude was unbelievable,” Laymon said. “I compliment her to the coaches as one of my favorite people ever. She was incredibly coachable, she was always coming to you about how to improve. Any time you’d give her feedback she’d use it. She’s going to go on and do wonderful things.”

Deem said that she could’ve played soccer at the next level but opted for academics.

“When you look at what she was involved in, dance, swimming, diving, soccer, track, she was one of the few that was able to balance it out,” he said. “On top of that, academically she’s strong, she’s passionate about academics as well as athletics. I told her going into her sophomore year, ‘it just depends on what you want with your life.’ She told me, ‘I just want to have a great high school year and enjoy myself and not play at the next level.’ Had she changed her mind, I know she could’ve played at the next level. She’s a very level-headed kid, you have to give credit to how her mom and dad raised her.”