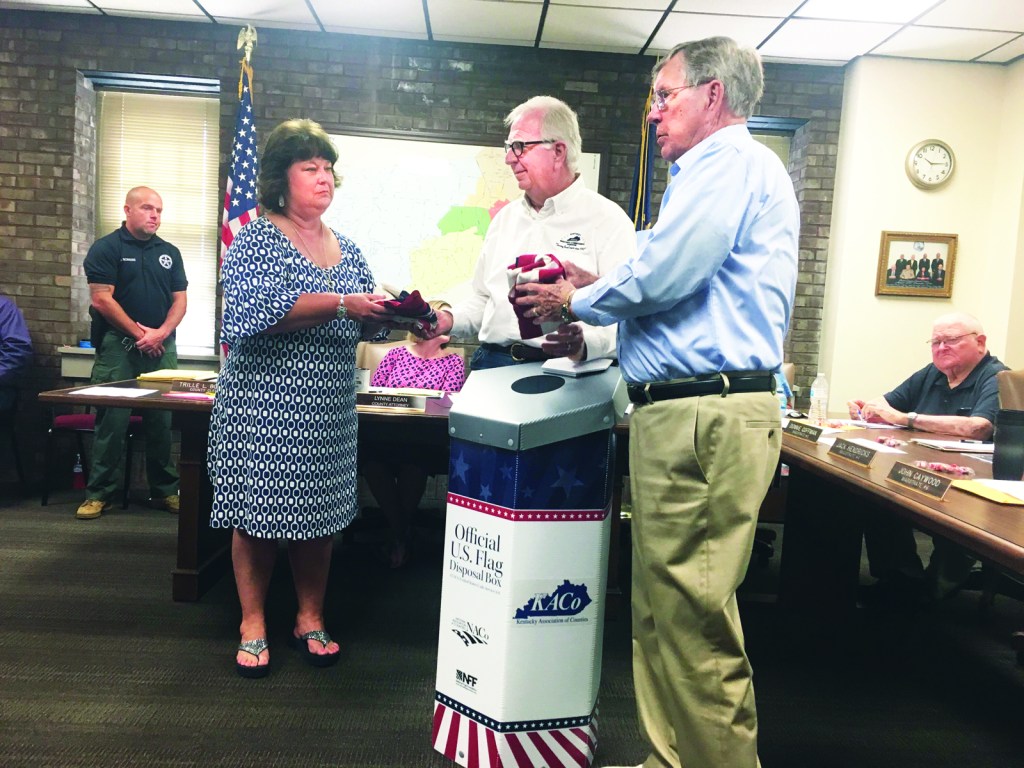 Bobbie Curd/bcurd@amnews.com Boyle County Clerk Trille Bottom, from left, with Magistrates John Caywood and Jack Hendricks, both veterans, dispose of several American flags showing signs of wear and tear that have been used during elections. Fiscal court received a presentation from the Kentucky Association of Counties on how to correctly dispose of them Tuesday during its regular meeting.

A presenter from the Kentucky Association of Counties told Boyle magistrates Tuesday morning that teaching kids how to correctly dispose of the flag could change the way they view their country.

The fiscal court watched a video presentation from KACo given by Scott Martin, director of member services, based around the premise of flag etiquette. He brought a large container marked “Official U.S. Flag disposal box,” which will be left at the Boyle County Courthouse for the public to use.

“You have to teach the kids at a younger age how to respect their flag, respect their country and our men and women of service,” Martin said. “This is how we can keep from what happened in the NFL from happening again.”

Martin, referring to several in the National Football League who have silently protested police brutality and racial inequality by taking a knee during the U.S. national anthem, said the flag allows them those freedoms to protest and it must be respected.

“When they grow up through that system of appreciation, we don’t get what we’re getting with the NFL and some of these people who aren’t appreciative. Because the flag allows them the freedom to protest, but don’t protest against it.

They say ‘we’re not protesting against the flag’ but, in my opinion, yes you are.”

Trille Bottom, county clerk, had several flags with her she said had served their purpose well.

“These flags have been used in voting precincts,” she said. They were displayed to represent the right to vote. She said they are showing some signs of wear and tear.

Magistrates Jack Hendricks and John Caywood, both veterans, assisted Bottom in retiring the flags into the disposal box.

“What the public will be doing is just putting them in here. The VFW will come by and pick them up,” Hendricks said. “We do about 400 a year in a flag retirement ceremony.”

A full, proper ceremony would take about two hours, he said.

“We take our time. There’s certain procedures with each flag. With the exception when you have 125 or 150 flags.” Hendricks said when there’s that many, they do a 15-minute ceremony on the first flag.

“The main purpose behind the whole thing is to show the respect of that flag in the way it’s retired,” he said. He said afterwards, there’s a huge fire.

“We don’t allow any pictures to be taken, nothing goes on Facebook because it will give a wrong impression, as you know. Flag etiquette says that’s how it’s done. The ashes are pulled and taken behind the VFW and actually buried.”

Bottom said, “As many of you know, my birthday is June 14, which is Flag Day, so I’ve been taught from an early age to respect the flag.”

Martin added, “Bottom line, this is a free program. If you’re not going to do it, why? Because we’re here to support the men and women of our military.”

Hendricks said the disposal box will likely be placed in front of the elevators at the courthouse.