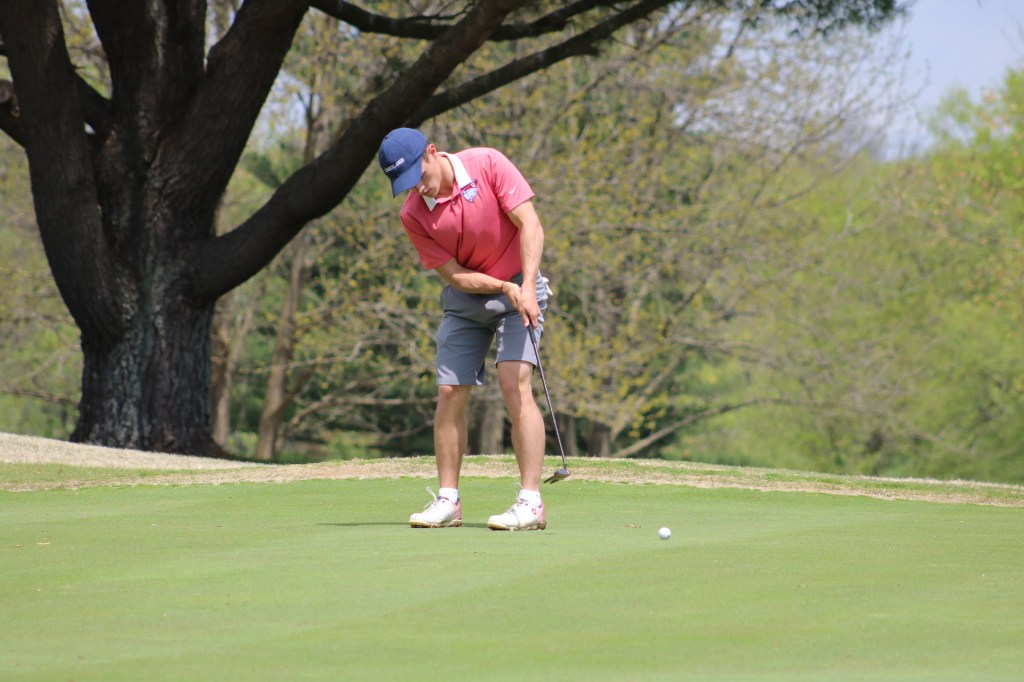 It hasn’t been long since Ben Kendrick graduated from the University of the Cumberlands, but he’s already building his brand as a professional golfer.

Kendrick has played in two Swing Thought tournaments this summer, placing seventh at the Oxmoor Country Club event in Louisville and third at a tournament in Batavia, Ohio at Elks Run Golf Course.

“It has been a big learning curve, that’s for sure,” Kendrick said. “I’ve only played two events, but I’ve really been trying to establish my routine. It’s like anybody starting a new job. I got a gym membership, I’m scheduling my tournaments to play in, scheduling flights, hotel rooms, working my practice around that.”

Practice has been Kendrick’s main focus out of college. It’s the first time in his career that he hasn’t had to focus on anything but golf.

“For awhile there, I was getting to the gym at 6 every morning, and I was out to the golf course by 8 o’clock,” Kendrick said. “But I started realizing that by 11, 11:30 it was the hottest part of the day and I was giving up an hour, hour and a half of practice each day to go work out. So I’ve started going to practice first, working out later in the day. It’s all been about figuring out my practice time to the best of my ability.

“In the past, with school, I’m studying and it was just practicing as much as I can. Now that’s just not feasible. It’s about managing what I do in practice, be intentional, things like that. Right now, practice is my biggest priority. I’m trying to get playing experience, get acclimated to that, but at the end of the day it’s just golf.”

That was Kendrick’s first thought during his first tournament — he was four holes in when he made a birdie and told his dad, who was his caddy that day, that “this is nothing.”

“I wasn’t any more nervous on the first tee, the ball is the same size,” Kendrick said. “I was playing a golf course I had played as an amateur.”

On the Swing Thought tour, you don’t have to have a “tour card,” Kendrick said. Instead, players pay their way into the event and purses are made in part from player entry fees. It’s a gamble on yourself, Kendrick said.

Over the next month, Kendrick will have five tournaments and multiple qualifiers. He’s sponsored by Titleist and will go to their fitting center in Georgia to get top-notch equipment.

“I’m kind of kicking off my first real swing as life as a pro,” he said. “Excited, it’s an understatement. I can’t wait to start this journey.”

“To have the chance to play in the Barbasol Championship, at Keene Trace, one of the finest golf courses in the state for sure and not even a 35 minute drive from my house, that’d be a dream come true,” Kendrick said.

Qualifying for an event like that is a different beast: More than 100 golfers showed out for the pre-qualifier at the U-Club.

“In qualifiers, it’s a lot of guesswork as far as what score will get through,” Kendrick said. “I’ve found that a lot of people get caught up in trying to shoot a score, predicting what could make it through and trying to go out and shoot that. I think you couldn’t have a more wrong approach to it. In golf, I think any time you try to reach for one number, that’s the last thing you’re going to do with that mindset, you’re always limiting yourself.”

Learning is Kendrick’s biggest goal this early in his career — he said he’s yet to play with a golfer as young as he is at an event.

Kendrick said his parents — Mark and Kathy — have been a huge help on his journey.

“As far as an agent or a manager goes, it’s all my mom,” he said. “I’ve been doing fundraising, I’ve got a website up, that’s kind of her brainchild. I’ve got blog posts going up regularly, my schedule is up there and a bio, stuff like that. That’s been the biggest part that I didn’t anticipate, I’m essentially running my own business.”

So, what’s the end-game for Kendrick?

“This is something that I’m trying because I don’t want to regret not doing it 20 years from now. That’s why I’m on the range at 6:30, I’m trying to practice as much as my body can physically handle in this heat and try to get my game to climb as quickly as possible.”

You can visit Ben’s website at benkendrickgolf.com, where he has information on how to support his professional golfing career.