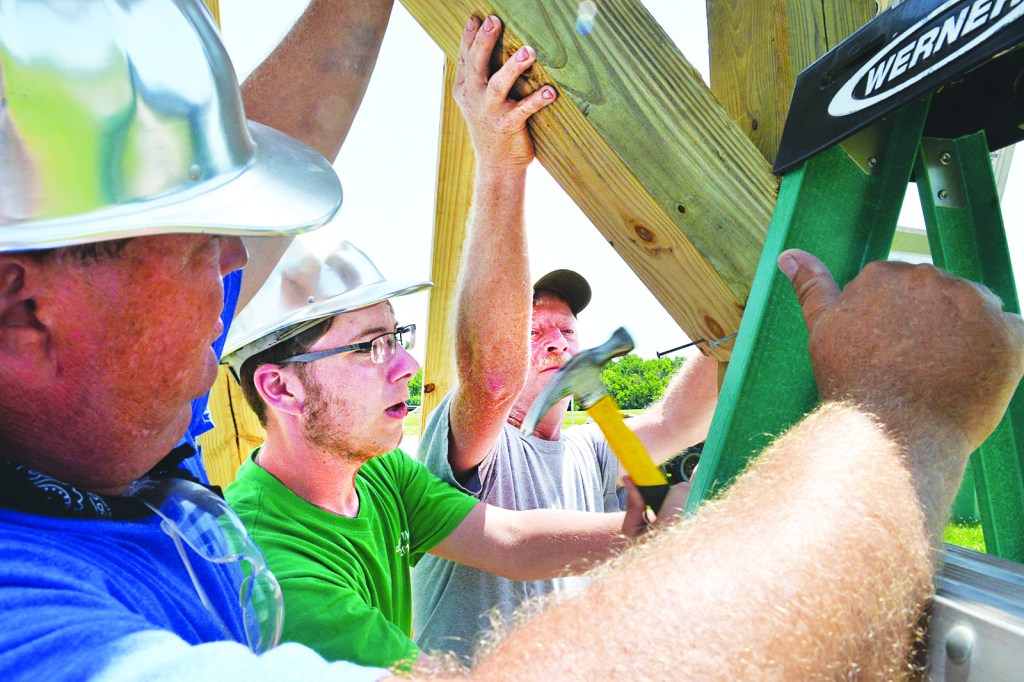 Photo by Robin Hart/robin.hart@amnews.com With the help of his uncle, Jeff Curtsinger, left, and father, Ronnie Tolson, right, Parker Tolson hammers a nail into a support at the shade cover structure he is building at Millennium Park as his service project to earn his Eagle Scout ranking.

A local teenager who is aspiring to be a robotics engineer has taken on a project “old style.”

Parker Tolson is a 17-year-old Boy Scout from Danville High School and is working on his Eagle Scout ranking by constructing a wooden shaded cover area, located next to the basketball courts at Millennium Park.

The 20- by 20-foot cover was built this week by Tolson, along with a lot of help from his younger fellow Scouts from Troop 27 and troop leaders, and his dad and uncle.

Tolson said he comes to the park often and noticed there were shaded areas all around for people to cool off in during hot, sunny days — except for the basketball court area.

Sitting under a canvas awning at the work site Thursday afternoon while swigging down water, Tolson points down toward a stand of trees.

“It’s a long walk to those shade trees,” Tolson said.

Then he points to a man who was shooting basketballs nearby. Tolson said he had been there several times while they were building the shade cover and noticed the man always went to his car to cool down in the air conditioning. The nearby shaded cover area will be great for him to use too, Tolson said.

Tolson found the design plan for the simple structure online. Then he and his uncle, Jeff Curtsinger, modified it to fit the site.

Once they figured out what was needed, Tolson said, “Very, very gracious people, very kind and helpful people” have helped to make his service project a reality.

In addition to many generous financial donations, Tolson said WeldQuip loaned the troop a Bobcat to excavate the area; Caldwell Stone donated gravel for the floor and the dump truck and driver’s time; Equipment Sales and Rental loaned the use of an auger to dig the post holes; and Lowe’s sold the lumber at cost.

Tolson said it was important to him to complete his Eagle Scout ranking. Once this large service project is finished, he only has a couple of merit badges to complete — just little odds and ends, he said.

He said by earning the Eagle Scout ranking, it would show future employers that he was trustworthy, a hard worker and could lead a team.

“This is a great example of that,” he said, as he watched other scouts and volunteers place support beams and hammer nails.

Tolson is the oldest Scout in the troop, therefore he strives to show the younger boys how to live up to the Boy Scout standards.

“I try to set the best example that I can. I follow the oath every day of my life.”

One of the things Tolson has learned from the project is that building “old style” with heavy lumber, hammers and nails is “a lot harder than it looks. It definitely is hard work.”

Tolson has experience with leading other projects, too, as a member of the Danville High School robotics team.

And, he said, the other Scouts and volunteers who are helping him build the cover “are some of the hardest workers I’ve ever had.”

Even the youngest Scouts who are 10 or 11 years old are a great asset. “They may not have the strength, but they still give it their best.”

Photo by Robin Hart/roboin.har@amnews.com From left, Alex Toth and Grayson Nagorka, both members of Boy Scout in Troop 27 in Danville, concentrate on striking nails as they helps fellow Scout, Parker Tolson, build a service project near the basketball courts at Millennium Park to earn his Eagle Scout ranking.

Photo by Robin Hart/robin.hart@amnews.com Parker Tolson is earning his Eagle Scout ranking by constructing a shade cover area near the basketball courts at Millennium Park.

Photo by Robin Hart/robin.hart@amnews.com Parker Tolson holds a support beam in place as his uncle, Jeff Curtsinger tells him what to do next.

Photo by Robin Hart/robin.hart@amnews.com Kesean Jones, a Boy Scout in Troop 27 in Danville, concentrates on striking a nail as he helps fellow Scout, Parker Tolson, build a service project near the basketball courts at Millennium Park to earn his Eagle Scout ranking.