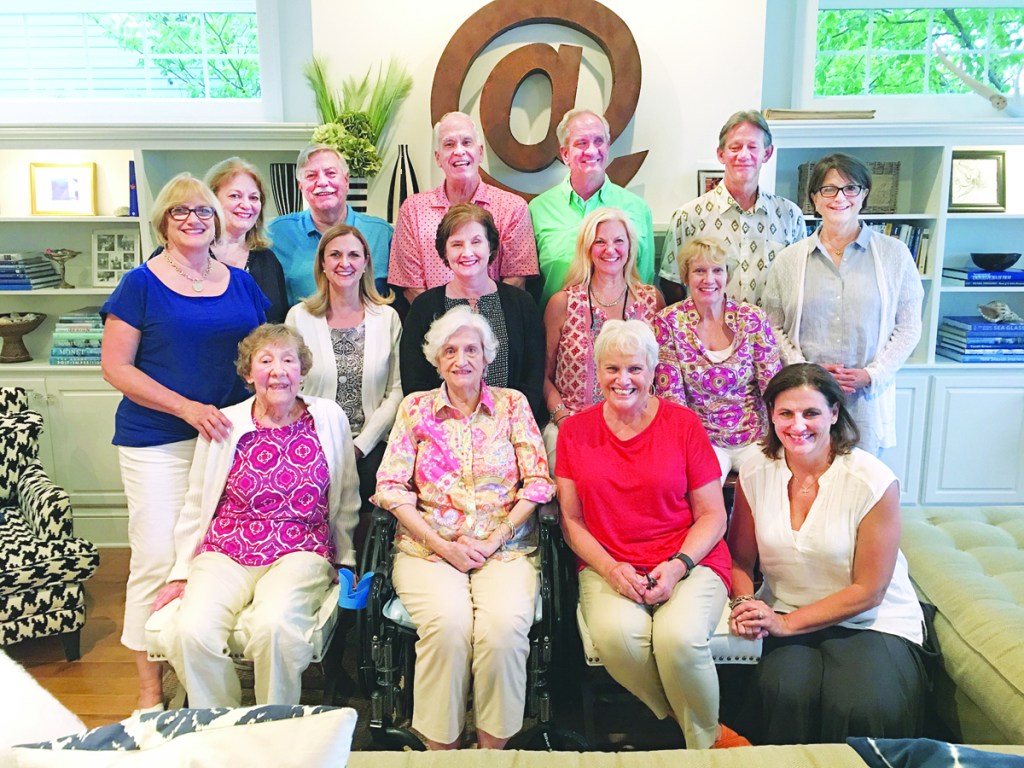 Photo submitted Patsy Clevenger, front row second from right, and her daughter, Norrie Clevenger Currens, far right, pose with Patsy's family she discovered through a popular DNS testing kit. In early June Clevenger and her daughter traveled to Michigan to meet her three half siblings, first cousins and two aunts, one being the sister of her deceeased birth mother.

When Patsy Matheny (now Clevenger) was growing up in Lexington, a bedtime story her parents often retold while tucking her in for the night was about her own young life.

Patsy is now 71 and lives in Danville. She’s always known she was adopted by her parents, the late Hubert and Louise Matheny when she was just 6 weeks old, because that was always a favorite bedtime story. 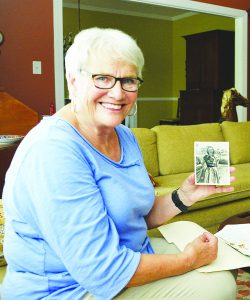 Photos by Robin Hart/robin.hart@amnews.com
Patsy Clevenger holds an old black and white photo of her birth mother she recently located. Patsy’s half-sister shared the photo when the family met Patsy in June.

“I was never ‘told.’ We never sat down and had a big conversation of how I came to live with them. It was a bedtime story. I always knew I was adopted,” Patsy said recently while sitting in her living room.

Now, after decades of occasionally wondering who her birth mother was, where she came from and what she was like, Patsy found the answers. She also discovered she has three living half-siblings, eight first cousins and two aunts, thanks to a popular DNA testing kit from Ancestry.com she submitted in the summer of 2017.

The bedtime story Patsy often heard was about “this lady who loved me very much but wasn’t able to keep me. The clothes that I was wearing when I came to live with them, she had picked them out and had dressed me in them. … I was brought to their home by the social worker wrapped up in a pink bunting she (her birth mother) had gotten for me. I was always told how much she loved me and wanted me to have a wonderful life. And I did.”

Patsy said she was “doted upon” by her adoptive parents.

“The sad thing is, in my mind, was that I was an only child. I hated being an only child, but I had lots of cousins and I saw them regularly.”

Patsy said she never agonized over who could have been her birth mother, but she did sometimes wonder who she was and about her family history.

“I never wanted to disrupt her life. I didn’t. Although I sure disrupted her three other children’s lives,” she said light-heartedly. “They knew nothing about me. … Nobody knew I existed. It’s been a shock to them, and I totally understand that. I can’t imagine being on their side of it and how they feel.”

Patsy said some research through her adoption files and a chance encounter with the social worker who delivered her to the Mathenys on Feb. 6, 1947, is how she learned her birth mother was married with one son when she divorced in Detroit.

“I was born out of wedlock between her first and second marriage. Right after the war. … That’s when I came along, right after World War II when all the soldiers were coming home. Things were just so different then. It was just so appalling to be unmarried and pregnant.” 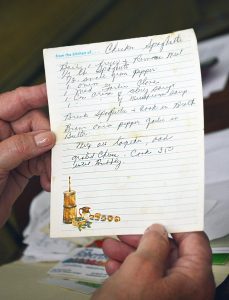 Patsy holds a recipe card for chicken spaghetti that was written by her birth mother.

Patsy said she’s not sure, but thinks her birth mother’s parents probably were the reason her birth mother ended up at the Florence Crittenden Home for Unwed Mothers in Lexington. She stayed there from September until after Patsy’s birth in late December of 1946.

Patsy also speculates her biological father didn’t know she had even been conceived.

Five years after her birth, Patsy’s birth mother remarried, moved to Montgomery, Alabama, and eventually had three more children with her second husband.

Patsy said at different times in her life, she wanted to find who her birth mother was, but the timing was never right. But after hearing about DNA testing kits on TV, “I just finally decided that the DNA test was an easy way to get it started.”

Patsy’s adoptive father died when she was only 15 years old, and her aunts played a very major role in her life; all of them have also passed away. Her adoptive mother passed away in 1994.

If she had really pushed to discover who her birth mother was while her adoptive mother was alive, “It would have broken her heart,” she said.

Whatever questions Patsy asked her adoptive parents were answered truthfully, she said, “But I also knew that it hurt feelings when I asked, so I really didn’t ask too many.”

Patsy said her adoptive mother didn’t encourage her to find her birth mother either. However, “If I had ever said, ‘I want to search,’ she would have supported me. But down deep that would have hurt her feelings.”

Only one time Patsy told her mother about a chance encounter and discussion she had with the social worker who had worked on the adoption.

“My sophomore year, 1965 at UK, I was in the Dean of Women’s office for a committee meeting and saw the name of the social worker whose name was such a part of my (bedtime) story.”

Patsy introduced herself and after a long chat, the former social worker, who was then an associate dean of women, “confirmed most everything Mother and Daddy had ever told me.”

However, a startling piece of information had been left out — Patsy had an older half brother.

When Patsy told her mother about the conversation, her “mother was furious! She said, ‘What if we had lied to you?”

They hadn’t lied to her, but Patsy questioned why her mother never said she had a half brother. “When I asked why she never told me, she said, ‘You never asked,’” she said. “She always answered anything I asked, but she didn’t just volunteer information.”

Patsy didn’t try to find out any more information until about 1971 —  without her adoptive mother’s knowledge — when she met with a woman in a Lexington office that handles adoptions.

“I sat across the desk from a young woman who had my file in her hand as she picked and chose what to tell me.” 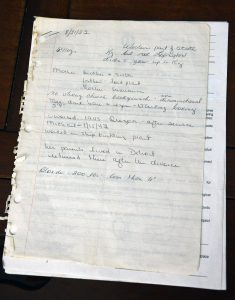 Hand written notes Patsy Clevenger made in 1971 during a meeting with someone in the office that handled adoptions in the 1940s. The only information given to her was that her birth mother had a brother and sister, had dark hair and was 5-foot 9 inches tall. Her birth father had blonde hair, weighed 200 pounds and was under six feet tall.

A few tidbits of information she divulged included her birth mother’s first name, birthdate, her older half-brother’s birthdate; that she was from western Kentucky but her family had moved to Detroit.

The only information given about her biological father was that he was blonde, weighed about 200 pounds was was under 6 feet tall.

The next time Patsy pushed a little deeper into her past was 21 years later, in 1992, when she petitioned Fayette County to open her adoption case file. She eventually received a redacted page from her file with names and dates marked out. A staff member did share one name, but Patsy wrote it down wrong. This caused many dead-end Google searches, Patsy said.

Then earlier this year, after receiving her DNA results, a whole new family chapter finally opened up in front of her.

Patsy began trying to contact several people who were listed as maternal close relatives. One contact with a possible first cousin led to another. Then on Valentine’s Day of this year, with the help of a maternally-related first cousin, Patsy tied all of the bits and pieces of her mysterious family history together. She had two more younger half-brothers and a younger half-sister. Her older half-brother had died years ago.

She also found out her birth mother had died in 2016, just about two weeks from her 93rd birthday.

“I just see God’s hand in this every step of the way. I just wasn’t meant to find all of this out while she was still living. She had kept me a secret for 70 some odd years, and I just was not meant to throw her life into turmoil.”

Patsy initially thought she’d call her newly-discovered half-sister and try to gently break the news. “But then I didn’t think I could get through that phone call.”

When she learned one of the brothers was an attorney, she had her daughter, Norrie Clevenger Currens who is also an attorney in Danville, call him with the news.

She said he was very kind, yet understandably cautious. He took down all of the information and soon took a DNA test himself.

“They needed concrete proof,” Patsy said. “They had no idea. Things were different back in 1946. And once you kept a secret for that long, it would be awfully hard to say, ‘Oh by the way…’”

Patsy found out not even her birth mother’s younger sister knew about the secret pregnancy.

Patsy and Norrie talked with several family members via phone and email this spring. Once the family accepted Patsy’s claim and felt more comfortable with the situation, she and Norrie were invited to come to Michigan for everyone to meet face-to face in early June.

Patsy was nervous before their visit.

“It’s a big deal. Think about meeting two brothers and a sister after being an only child your whole life! It was a big deal.”

During their two-day visit, Patsy and her new family became better acquainted. Her half-sister gave Patsy an original black and white photo of her mother.

When she asked if Patsy would like anything else to remind her of her birth mother, Patsy said she’d like some of her recipes.

“I don’t know why that was important,” she said. But in her birth mother’s obituary, “It mentioned that one of her specialties was chicken spaghetti, and that’s just something I love, so my half-sister brought me that recipe card that was in her own handwriting.”

Patsy said when she walked into the room for the first time, none of the family said she looked like anyone they knew — certainly not her birth mother. Patsy has white hair now, but she was a blonde in earlier years and has bright blue eyes. Her birth mother had dark hair and brown eyes. Patsy also didn’t inherit her birth mother’s height of 5-foot 9 inches.

“She was a gardener too. I didn’t get that gene either.”

But there are some similarities. She found out her birth mother was a good athlete. Patsy was also a good athlete and majored in physical education in college.

“It’s also funny because she did bookkeeping, as did my adoptive mother, as did I.”

Patsy also found out her birth mother was kind of like a neighborhood counselor. She was almost 41 years old when she had her last child.

“All the young mothers would come and talk to her. She had lots of life experiences.”

Patsy said she doesn’t expect to be invited for Christmas by her biological kin or anything like that — she would “just like to be friends.”

It’s just nice for her to have some of the holes in her life filled in, she said.

“I just truly believe that God decided it was time that I got answers to these questions.”