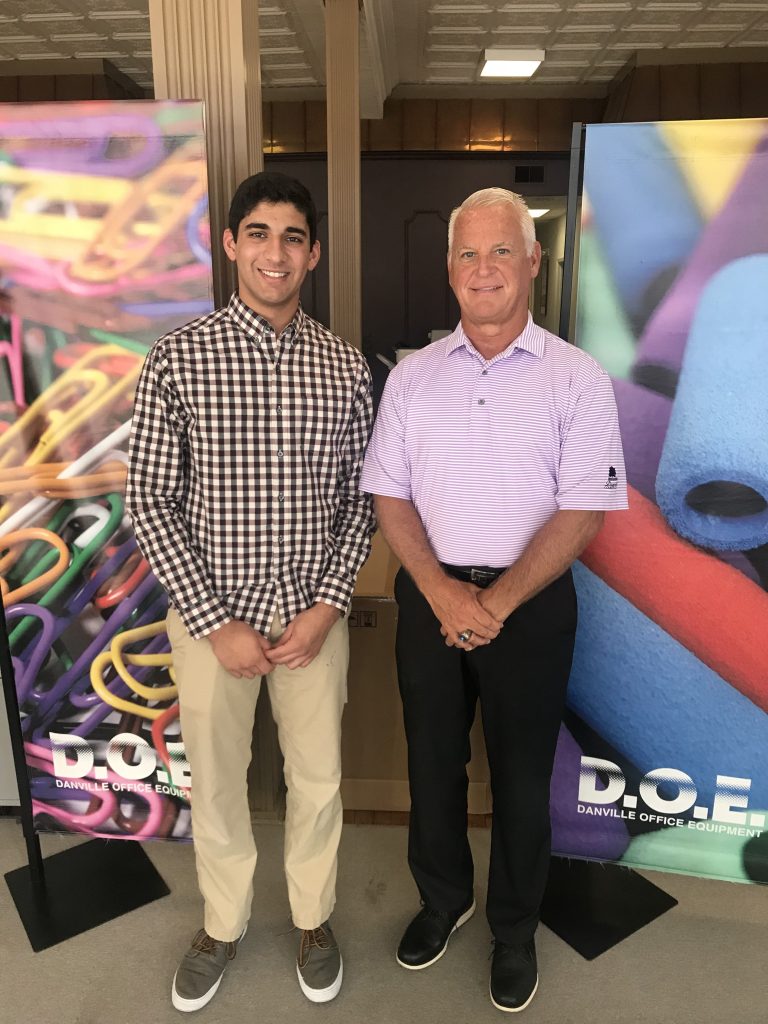 The Danville grad did that throughout high school, posting a 5.1 GPA through high school while juggling three different high school sports, as well as a handful of other extracurricular activities.

“It got very difficult at times, for sure, especially during junior and senior year,” Siddiqui said. “But what got me through was my friends, my family, they all helped me. I’m blessed to have my parents support me. They just tell me not to give up, keep pushing forward. That’s my mentality, as cliche as it sounds, on the soccer field or in classes.”

“I’m very excited because my sister got this award, that was my sophomore year,” Siddiqui said. “And when I learned about the award it’s always been an award that I wanted. To earn it, it’s something that makes me happy and shows me that my hard work on the soccer field and in classes has paid off. I’m just extremely grateful for it.”

Let’s start in the classroom, where Siddiqui and Nesmith each tied for the No. 1 spot in a class of 111 students at Danville.

Siddiqui was KHSAA First Team Academic All-State in all four years of high school. He scored a 29 on his ACT  and was a 2017 Governor’s Scholar. He was involved in the Islamic and Qur’anic studies class for three years, was on the high school academic team for four years, a Junior Statesman of America for four years and a member of the Danville High School Spanish club for four year sas well.

In athletics, he ran cross country and track and field as an underclassman. He played tennis during his junior and senior seasons.

But those sports pale compared to his achievements on the soccer field.

He scored more than 30 goals and provided more than 10 assists across his four years, capped by a 20 goal, nine assist senior season.

“My coaches, if you really get to know them, you can see the passion they have for soccer and for the sport and for the kids on the team. You see how much they love it,” Siddiqui said. “Soccer for me, through them, has been a life-changing thing because of the passion they show for it and they’re there for you on and off of the field. They helped with soccer and personal advice, life advice. They’ve been there to help and it has helped me a lot.”

Siddiqui thanked his parents and teachers as well — and his father has influenced what he wants to do after graduation. He’ll go to the University of Kentucky to major in chemistry, on a track for medical school.

“I’ve seen a lot of people go through that process and I know it’s a difficult route to go, you have to be motivated,” Siddiqui said. “But I know the end result and I think the main thing for me is that in the end, I get to help people. I want to have those one-on-one conversations with people, help change their lives health-wise. I know health is just so important to people — eating habits, exercise, it’s so important. My dad, he’s a doctor, and I see the way he looks at patients, the way he treats patients and how his goal is to heal and help patients. I want to do something that gives back to the community, gives back to people and I think this is a really good way to do that.”

That’s where Siddiqui’s motto comes in handy — he knows he’s still early on his path in life but will give everything he has to reach his goal.

“I know with hard work you can accomplish anything, you can overcome any obstacle,” he said. “It’s all about your mentality you bring into the match, the game, the test that can give you the outcome you want.”

Danville graduate Elisabeth Nesmith is one of the most decorated Admirals in school history.

Both in the classroom and in the water, Nesmith excelled for the Admirals.

“It’s really an honor. It’s nice to be recognized for something that’s not just athletics and not just academics, but a combination of both,” Nesmith said. “I’m just really grateful to the teachers who have taught me to appreciate the things that I’m learning and for my coaches who have given me the drive to continue swimming, not just through high school but into college as well. I’m looking forward to where I’m going with both my academic and athletic careers.”

Nesmith’s name is in the Danville record books for three swimming relays and the 100 freestyle. She was on the team for five years and went to state for the third-straight time this year as a senior. She will swim at the next level at Smith College, an all women’s school in Massachusetts.

“I didn’t set out looking for an all women’s school,” Nesmith said. “I visited on a whim when my dad had a business trip to Boston. I really enjoyed the empowering community that was there and the obvious love of learning that it fostered. I felt like that would be a really good place for me to grow as a student and a person who wants to find their place in the world and help the people in it. That’s what I want to do there, that’s why I picked it.”

As if that wasn’t enough, she’s also a member of the Lexington Dolphins swim team, where she attends practice at least four times a week for 10 months out of the year.

All of that swimming will help her swim at the Division-III level, and she said it also helped her be more productive with her time. Having teammate Haley Akers share the ride with her to Lexington from Danville was another huge help, she said.

“Honestly, having swimming in the afternoons made it easier to be productive because I’d be like, ‘OK, I have this much time after practice to get the stuff I need to get done,’” she said. “Rather than just laying around at home and thinking I had all this time that I could do this. It helps me to not procrastinate. I also had a study hall this year and last year, which was very helpful. It’s just kind of a learning curve.”

Outside of swimming, Nesmith distanced herself with distinction in the classroom. She and Siddiqui each had a first-in-class 5.1 GPA in high school and she scored a 34 composite on her ACT.

She thanked her parents for giving her the tools to succeed and teachers at the high school that invested their time in her growth.

“Several teachers at the high school, they devote their time to not only teaching you but also getting to know you as a person, making sure that you feel comfortable and empowered in the high school,” Nesmith said. “I really appreciated that personally, they treated me like an adult.”

Nesmith also thanked her coaches — John Anderson, the head coach at Danville, and Katy Peterson, her head coach in Lexington.

“(Coach Peterson) has been pretty influential in my swimming career because she’s always reminding me how strong I can be and how my limits, I’m not as limited as I think I can be sometimes. I can push myself,” Nesmith said. “She did a really good job of ensuring me that I’m not just a swimmer. That was really influential in my growth.”

Nesmith invested other time in her church, Trinity Episcopal, where she was a member of the youth group and took two mission trips each year.

“That’s kind of my biggest thing outside of swimming,” she said. “We meet once a week but we do mission trips in the summer to rural tennessee, then in the winter go to eastern kentucky. That’s been a big part of my growth and obviously my faith.

“My youth group, my friends and the leaders there from Trinity and the Presbyterian churches. They’ve given me a safe and welcoming spot, which I think is really important for a high school student to have, just to know that they’re welcome and accepted. That’s been really important and meaningful for me in the last eight years.”

With everything she’s done in Danville, Nesmith said she’s ready for the next step. She said she isn’t sure what she’ll major in at Smith College but knows that she is interested in social justice work.

“I feel ready to move on,” she said. “I think it’s still going to be a pretty big adjustment because I’m going so far away, but I feel ready.”