One Day: Jennifer and Dan McClelland 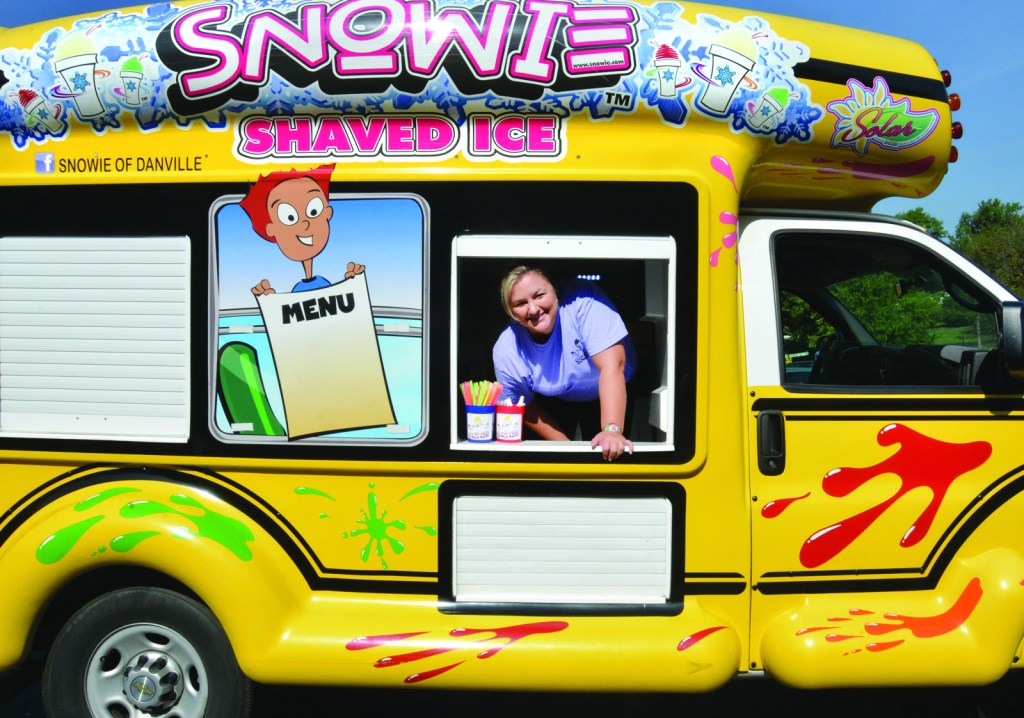 It’s really nice to have a business where everyone is happy to see you. That’s what Jennifer McClelland said about her and her husband Dan’s second job of owning the local Snowie Shaved Ice franchise.

Jennifer’s “regular” job is with Robinson, Hughes and Christopher accounting firm in Danville. Dan works at Deco Art in Stanford and is the minister of music at Hyattsville Baptist Church. 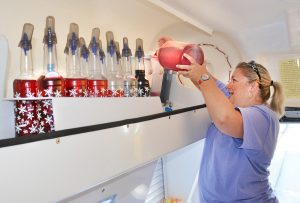 But when they come home from work or on their days off, they usually head right back out in their big yellow converted van that resembles a cartoon school bus.

They say kids are always happy when they see the Snowie van stop and open the windows for business.

“No one is ever grumpy when they come up” to buy a sweet icy treat, Jennifer said recently while getting ready to take the van out to serve children at a local daycare center.

As she filled reservoirs of sweet, flavored syrups, Jennifer said the idea to have a “sideline” frozen treat business came about while watching a local ballgame over four years ago. She and her husband, along with another couple were surprised at how many people were waiting in long lines to buy cups of flavored shaved ice. They thought they could also do it, and make some extra income. They checked into purchasing a franchise license for that same business for this area, but were denied because someone else had one too close, Jennifer said.

After a bit of research, the McClellands and their friends decided on Snowie Shaved Ice. That was four years ago.

Eventually their friends left the partnership, so now Jennifer and Dan run the enterprise themselves.

However, they can’t go to all of the places that request Snowies, especially during regular business hours of the week, so they have hired three other couples from Dan’s church who help out. They also have four mobile shaved ice carts they set up at Millennium Park during baseball, little league and softball games and tournaments. 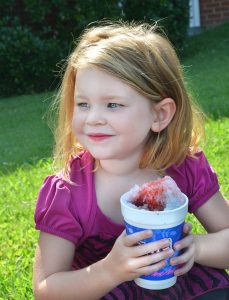 (Robin Hart photo)Molly Neyhouse seems to be happy with her large Snowie cup.

At events where the crowds are larger, Jennifer said it takes three people inside the van to keep up with the demand. One person fills cups of shaved ice while two others constantly hand them out and take payments.

Jennifer said the extra income they earn with Snowie Shaved Ice is helping to pay for their son Ryan’s college education.

She said their son  just left for his first year at the University of Pikeville where he will be playing football. But all during high school, Ryan always worked with them selling Snowies either in the van or at one of the mobile carts.

The McClellands don’t take the Snowie van through neighborhoods and ring a bell or play silly music to get kids’ attention like ice cream trucks used to do, Dan said. Today, kids don’t play outside and ride bikes as much. He said they tried traveling down streets a few times, but the business just wasn’t there.

So, now the Snowie business is event driven, he said.

They take appointments for places like corporate events, birthday parties, small businesses, daycares, bible schools and school events. They also participate in fund-raising events where Snowie gives back some of the money to the organization.

Jennifer was smiling the entire time she checked on her supplies of cups, spoons, napkins and paper towels in the van. Wiping off the inside counter, she said everyone seems to enjoy the inexpensive “little pick me ups.” And it’s fun to see families enjoying the icy treats.

But the cool Snowie business isn’t just to be enjoyed on hot summer days.

“We don’t just stop when the weather gets cold,” she said. 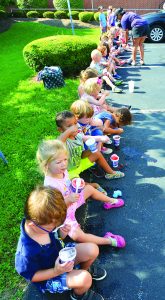