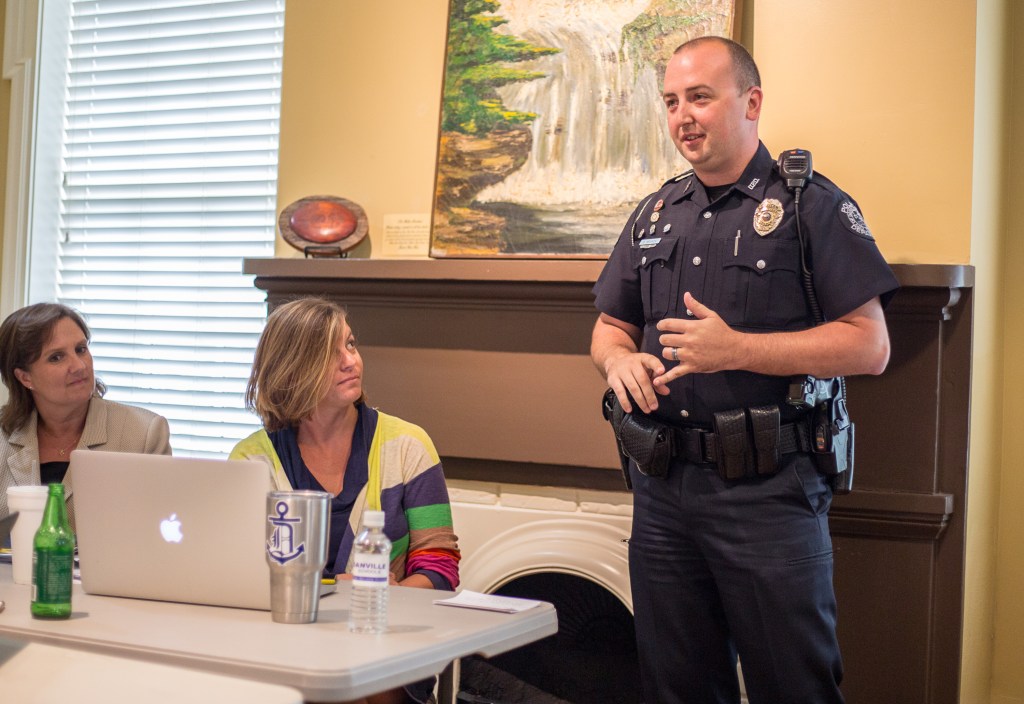 Ben Kleppinger/ben.kleppinger@amnews.com Danville Police Officer Chase Broach, right, announces Monday that the school resource officer program, a partnership between the Danville Police Department and the Danville Schools, is being ended in advance of the 2018-19 school year. From left are Danville Superintendent Tammy Shelton and Board of Education member Lori Finke.

Danville Independent School District will not have a police officer dedicated to its schools in the coming school year, Danville Police Officer Chase Broach announced Monday.

The end of the school resource officer partnership between the schools and the city is a result of understaffing and an inability to retain experienced officers within the Danville Police Department, Broach told members of the Danville Board of Education.

“It’s not a school decision, and it’s really not a decision by the police department,” Broach said. “It’s a decision out of necessity. We’ve just got no one left.”

Broach told school board members Danville’s SRO position has existed since the 2011-12 school year. He has been the SRO for every year of the program’s existence, and has developed many relationships with students and teachers, including serving as a coach for multiple athletic teams.

“At no point was this ever a position that we had to have in order to control the school,” Broach said. “It wasn’t because of criminal activity. It was a chance to put someone in the schools for the police to be seen as a good person. And now more than ever as we transition with time, social media, current events, we’ve got to have that person in the school.

The unfortunate news for us is that we’re not going to have that person this year. The Danville Police Department is incredibly short-staffed. This may be the lowest I have ever seen our staffing.”

Broach said when he came to the DPD in 2006, the department had two K9 officers, four or five detectives and were “32 strong.”

Today, the department has no K9s; there are numerous officers not on the streets because they’re completely new to the job and still in the police academy; there are multiple retirements of more experienced officers expected; and there’s a serious problem with retention and recruitment, he said.

In fact, “we just had a guy resign an hour and a half ago,” shortly before Monday afternoon’s school board meeting, Broach said.

Broach said the DPD’s staff might look good “on paper,” but in reality, there are very few officers available to be on the streets, providing coverage 24/7. While there are 35 names listed as employees of the DPD, one is in training, four are being educated in the police academy and two “stepped foot in the police department today for the first time — this was day one.”

“Because of the staffing issues at the police department, we just can’t keep anyone in the schools. We have no one to do anything extra.”

Among those planning to leave the department is the assistant police chief, Robert Estill, who Broach said is expected to step down next month.

“He calls it a retirement, but it’s more — I think — frustration,” Broach said. “It’s very odd to see someone be an assistant chief and not stick around long enough to be chief. So we’ve just got a lot of struggles.”

Estill was not able to be reached for comment by deadline.

Danville Schools Chief Financial Officer Paul Dean said the school district paid the DPD about $38,000 last year in order to have a school resource officer in the schools 10 months out of the year. Barring any further developments, the school district will no longer be paying that amount to the city and the city will not be providing an SRO.

“We are just short-staffed,” said Police Chief Tony Gray, who was reached for comment outside of the board meeting. “I just don’t have the staffing right now to efficiently run the streets and cover patrol.”

While he realizes school safety is of the utmost importance, Gray said they can only do what they have enough manpower for.

“We are looking for ways to cover it, but it won’t be done on a full-time basis,” he said. “We’re looking at different options to be there part-time, and to see how we can make that work. There’s some options we might already have, but those options for us would have to be on an overtime basis — something, if you recall, the report from city commission said would be cut down on.”

Gray was referring to a recent report issued by City Manager Ron Scott, which highlighted ways he would provide for raises for some city employees until a wage/salary and benefit study is able to be completed. Within the report, Scott said to be able to afford the raises (which are $1 an hour salary adjustments based on length of time working for the city), each department head would be required to be frugal and practice “better utilization of overtime.”

Broach said a major obstacle to hiring and retaining officers is the lack of a structured pay scale that could reward officers who come to the department with experience.

Broach offered an example: If someone who has worked for another police department for four or five years “calls us up and says, ‘Hey, it’s kind of stagnant, I’m not getting any career advancement, I’d like to come to Danville and do more, what can you start me at?’ ‘We’ll give you our starting pay.’ ‘But I’ve worked somewhere for five years.’ ‘Sorry. Sorry buddy, that’s all we can do for you.’”

Broach said DPD can’t tell officers what they will make in three or five years if they stay with the department.

“These are all things that make people hesitant to leave their job when they know there’s a structure, there’s a scale.”

Danville board Chair Paige Matthews told Broach, “I am sad for our students first and foremost, because I know the relationship you have with our students, and I know how much they look up to you and the respect they have for you.”

Matthews added, “this is something that is a bigger issue than any of us right now can solve. I just hope it’s very short-term.”

Broach said “the outlook is grim,” but the hope is the SRO program could be reinstated for the 2019-20 school year.

“I hate this for our students, but we will do as a district whatever we have to do to make something work so that our students know they’re safe,” Matthews said. “I know Dr. Shelton has looked at some other options if we have to in the meantime, whether it’s a year — hopefully not any longer, we can find something to do.”

Board member Steve Becker said when discussions about creating an SRO position first began in 2006, he was opposed to the idea of having an officer with a gun in the schools. But since the program has been implemented, he has seen its value and knows now it was “totally the right thing to do.”

“This isn’t a Danville school issue, this is a Danville issue. That tells me we barely have enough coverage to take care of the citizens,” he said. “… All that I hear (is), ‘We don’t have the money.’ They’ve got to come up with the money. Because it is now imperative that we have more coverage than we do, and it’s not just because of the schools.”

“I’ve talked to two (Danville city) commissioners,” Becker said later in the meeting. “They had no clue that this was going to be a ramification of their decisions not to fund either a more equitable pay scale or whatever. I said, ‘We don’t have an officer either now.’”

In May, Danville City Commission heard from 13 firefighters and police officers who said they feel the city isn’t paying enough to retain good first responders. The comments came after the commission voted to increase the pay for city commissioners and the mayor by 50 percent, effective Jan. 1, 2019.

The first responders cited a salary survey from the Kentucky League of Cities that showed many of Danville’s police and fire positions have salaries well below the average for cities in Kentucky that responded to the survey. The same survey was used as justification for increasing the salaries for elected officials so they would earn as much or more than 75 percent of comparable elected positions in the survey.

Broach was among those who made public comments to the city commission in May. He asked them at the time, “When will we receive our pay raise to bring us into the 75th percentile?”

“We have seen the salary survey and we know that we too are underpaid like the commission and the mayor,” Broach said. “We have been following the vote closely on the ordinance (that gave raises to the elected officials) and paying close attention to the reason for the raises … our goal tonight is to create a conversation in hopes that a timeline can be established for all employees to receive an adjustment to rate of pay and create a structured pay scale, ensuring you will be rewarded for staying with the city.”

The city’s plan to conduct a study of how much its employees are paid, as well as Scott’s announcement of planned $1 raises for more senior employees, came in the weeks after the first responders’ public comments.

Options for the 2018-19 school year include police officers filling in occasionally at the Danville schools as they have time, Broach said. But given how much overtime officers already work — many are working hundreds, with some approaching 900 hours of overtime annually — that option can’t guarantee coverage in the schools.

Broach said he is being assigned to a day shift, and he plans to make himself available to the schools if they call with an issue and there’s nothing else he has to be doing.

There’s also the possibility of hiring one or more retired law enforcement officers to provide a presence at the schools.

“We are looking at maybe an alternate schedule, but realistically you already heard that all of the officers are already spending a lot of time with overtime, and so actually asking them to fill the slots with more overtime … may be a challenge,” said Tammy Shelton, newly hired superintendent for the district. “We’re looking for retired officers, but we’ve not been able to find one. So if anybody in the community that knows a retired officer that they could reach out to and have them contact the school system, that would be great.”

“I just hope they’re out there,” he said.

“We do, too,” Matthews responded.