Laugh-out-loud farce next up at Pioneer Playhouse 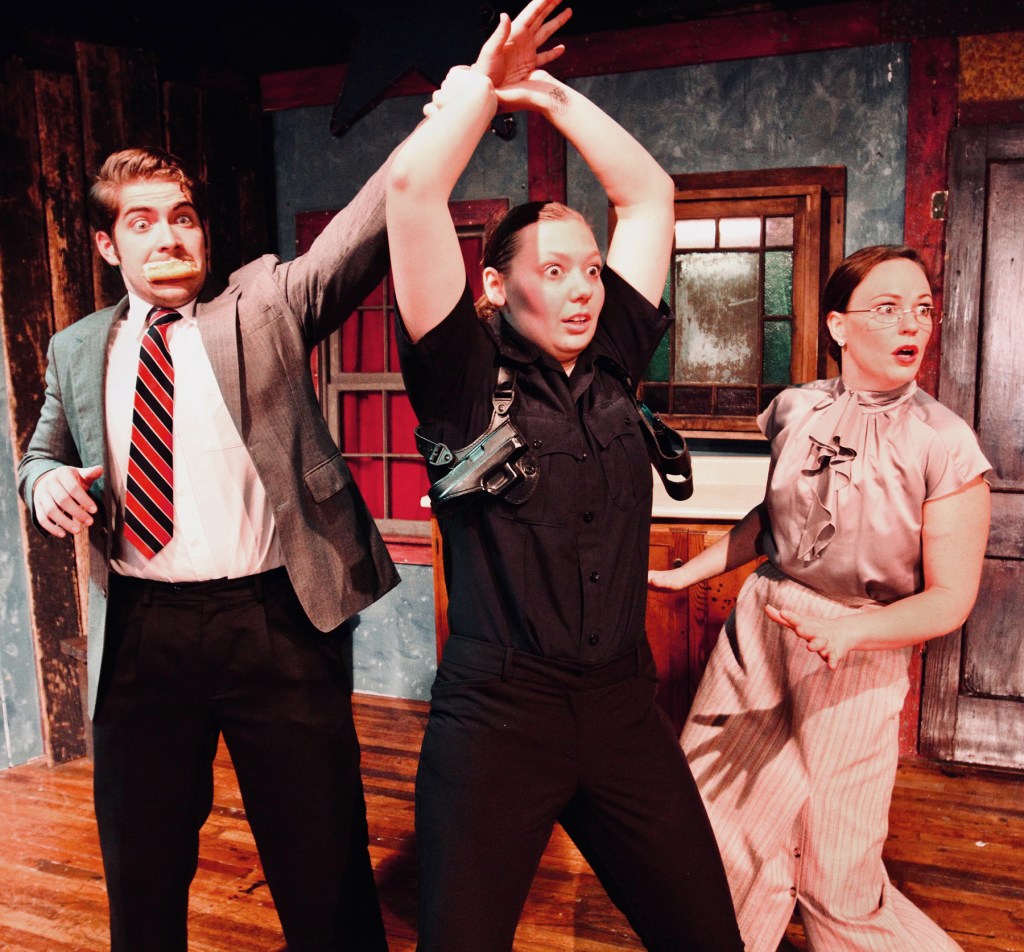 Pioneer Playhouse of Danville continues its 69th season under the stars with “Unnecessary Farce,” an award-winning comedy by Paul Slade Smith that combines all the elements of classic farce with a contemporary American plot.

In an economy hotel room, an embezzling mayor is supposed to meet with his female accountant. In the next room, two undercover cops are supposed to catch the meeting on videotape. But there’s some confusion as to who’s in which room, who’s watching the videotape, who’s taken the money, who’s hired a hit man, and why the accountant keeps taking off her clothes. 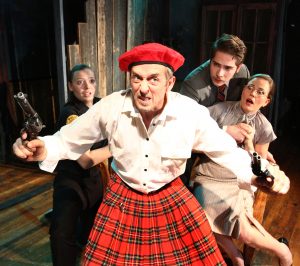 “Logistically, this show has eight doors, seven characters, four (fake) guns, about a hundred props and costumes, and who even knows how many entrances and exits,” says Sara Rademacher, director of “Unnecessary Farce.” “Keeping track of everything and everybody from moment to moment, and making sure the right guy has the right pair of pants on in the right scene is in itself a challenge.”

This is the first time Rademacher has directed at Kentucky’s oldest outdoor theatre.

Asked about her experience so far, Rademacher says, “When I listen to what folks are saying when they are leaving the shows at night, I cannot help but be in awe of the community Pioneer Playhouse has created. Everyone behind the scenes understands how to pitch in and bring a show to life, and the audience wants to be part of it too. It is a beautiful thing.”

A New York-based theatre director with an MFA in directing from Columbia University, Rademacher has directed new and classic plays in California, Washington, New York, Michigan, Minnesota, Virginia and South Africa, and is excited to add Danville, Kentucky to the list.

“I came to Kentucky about a year ago, and couldn’t turn down the chance to come back,” says Rademacher.

Asked about the challenges of directing farce in general, Rademacher says, “Farcical comedy is one of the most technically difficult things to pull off, so it is extremely satisfying when it all comes together. My favorite thing to do as a director is to provide surprises for the audience, which is built into the structure of farce. It’s all about setting up expectation, reaffirming that expectation, then breaking it … over and over and over.”

Of course at Pioneer Playhouse, there isn’t a whole lot of time to work things over and over, since the rehearsal period is only ten days long. Asked if she finds the schedule somewhat daunting, Rademacher laughingly says yes, but quickly adds, “Luckily, we’ve got a cracker-jack team of actors and crew, and we all have each other’s back!”

One of those actors is Daniel Hall Kuhn, who is a longtime Playhouse favorite and who plays Todd, a Scottish hit man whose brogue becomes thicker and more incomprehensible the angrier he gets.

Erika Lee Sengstack, who returns for her fifth season at the historic theatre, plays Karen, the accountant who finds herself uncontrollably attracted to one of the undercover cops played by Giancarlo Herrera.

“This play has been a huge hit around the country,” says Heather Henson, managing director of Pioneer Playhouse. “I literally couldn’t stop laughing while I was reading the script, so I know audiences are going to love it.”

“Unnecessary Farce” opens July 24 and runs through Aug. 4. Plays are performed 8:30 nightly, Tuesdays through Saturdays. A home-cooked dinner featuring hickory-smoked BBQ pulled pork or chicken, and farm-fresh sides is served at 7:30 pm each evening before the show. (Vegetarian option is available if ordered 24 hours in advance.) A bar serving wine, beer and mixed drinks is open Thursdays through Saturdays for those 21 and over. Reservations are recommended for the show, required for dinner. Dinner and show is $34; show only is $19.