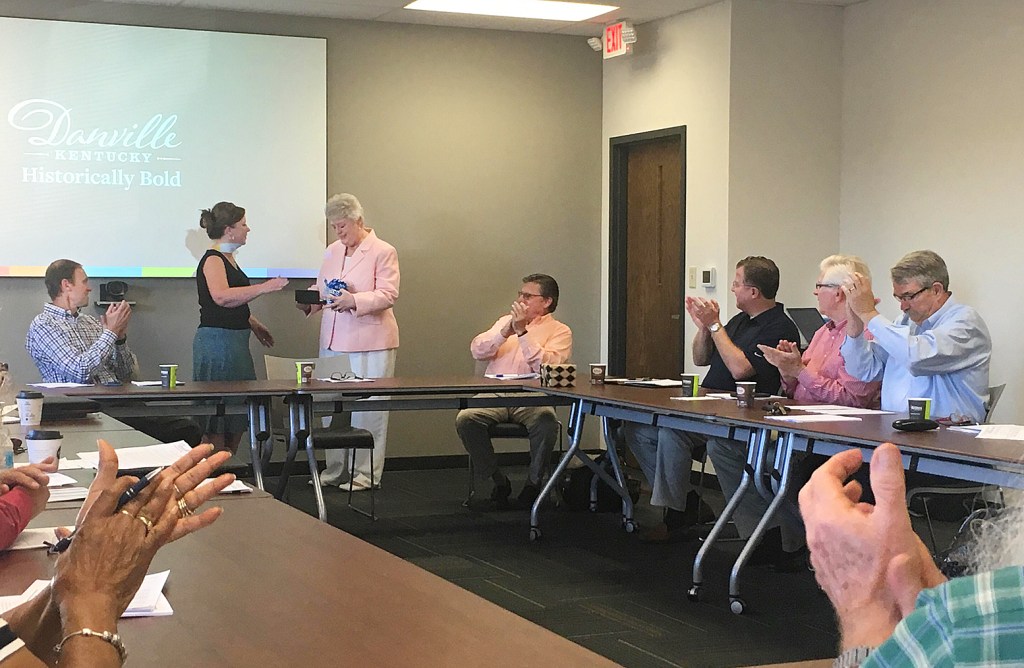 Sally Davenport is speechless after being surprised with the key to the City of Danville. Denise Terry, left, presented it to her during Wednesday's Economic Development Partnership meeting. Davenport is an outgoing member, and is also retiring as CEO of Ephraim McDowell Regional Medical Center.

Much of the Economic Development Partnership meeting Wednesday focused on organizational needs, including appointing three new directors to replace those whose terms are up.

“We are here today to say farewell to the three 1-year terms,” Chair Ben Nelson said. He explained that when the board was reorganized, the initial members were given 1-year, 2-year and 3-year terms.

Nelson then asked Davenport, retiring CEO of Ephraim McDowell Health, to the front of the room. She hesitantly agreed to after a few requests. He thanked her on behalf of all the EDP partners, and said she has always jumped in to help with whatever was needed, including other committees and projects.

“You’ve been a faithful board member, and a big employer in our community,” Nelson told Davenport. Davenport is retiring as CEO of Ephraim McDowell Regional Center, and brought the new CEO — Dan McKay — in to meet the EDP group.

Board member Denise Terry stepped to the front and told Davenport she’d been more than a board member: “You have been my friend. Women like you have paved the way for women like me.”

Terry joked about how Mayor Mike Perros once referred to Davenport as “a dynamo.”

“I tease you about that …” Terry said, then added: “But, when Sally Davenport calls, you show up.”

Terry said Davenport has done a lot of “behind-the-scenes things” that no one ever knows about, because “that’s the way she is.”

She then presented Davenport with a key to the City of Danville, which Davenport had not been expecting.

“Oh my gosh!” Davenport exclaimed. She eventually made her way quietly back to her seat, saying, “I don’t do this … But I appreciate it, very much.”

Perros reminded everyone, “If you roll back a few years, Ephraim McDowell Regional Medical Center was a much different place. And Sally had one foot out the door, going into retirement, and she answered a call. It’s probably one of the most difficult things you can do as a CEO, to go into a situation in turmoil, and not only calm the waters, but garner respect from her peers.”

Perros said the medical center is a “much different place today, and I will say this without any hesitation — it’s because of the silent strength and style of Sally Davenport.”

Alan Turbyfill was brought on to fill the seat Goggin will leave. He was also nominated and accepted the role of treasurer.

Kathy Miles will replace at-large member Look. She wasn’t available to attend the meeting, but Nelson let the group know Miles is not new to the board.

“She gave up her seat during the reorganization,” he said, so essentially, she will be reinstated. Nelson said her past corporate knowledge learned from being on the board will be invaluable.

The nominating committee hadn’t been able to meet and recommend a new member, Harold McKinney said, but the group had come to a consensus about Miles via email.

“She didn’t accept it right away,” McKinney said, adding Miles seemed to give the idea very careful consideration before saying she would like to be considered.

Both new members were unanimously voted in by the board.

Nelson told new hospital CEO McKay, in his third day on the job, the group hoped he planned to join the board, as well.

Although McKay comes to Danville by way of Bentonville, Arkansas, he’s originally from Maysville, Kentucky.

“I spent the last nine years in Bentonville,” McKay said, adding he left his home state 25 years ago. “And I’m glad to be back home. My mom and brothers are still back in Maysville, and I graduated from the University of Kentucky and Xavier University,” he said.

McKay has a wife and four children.

“My youngest is actually going to UK in August,” something McKay said was just a coincidence.

“He got accepted and then I got the job. I think it was fate that I keep an eye on him,” he said. “I’m glad to be back.”

Editor’s note: This story has been updated to reflect the correct spelling of Ephraim McDowell Health’s CEO Dan McKay.