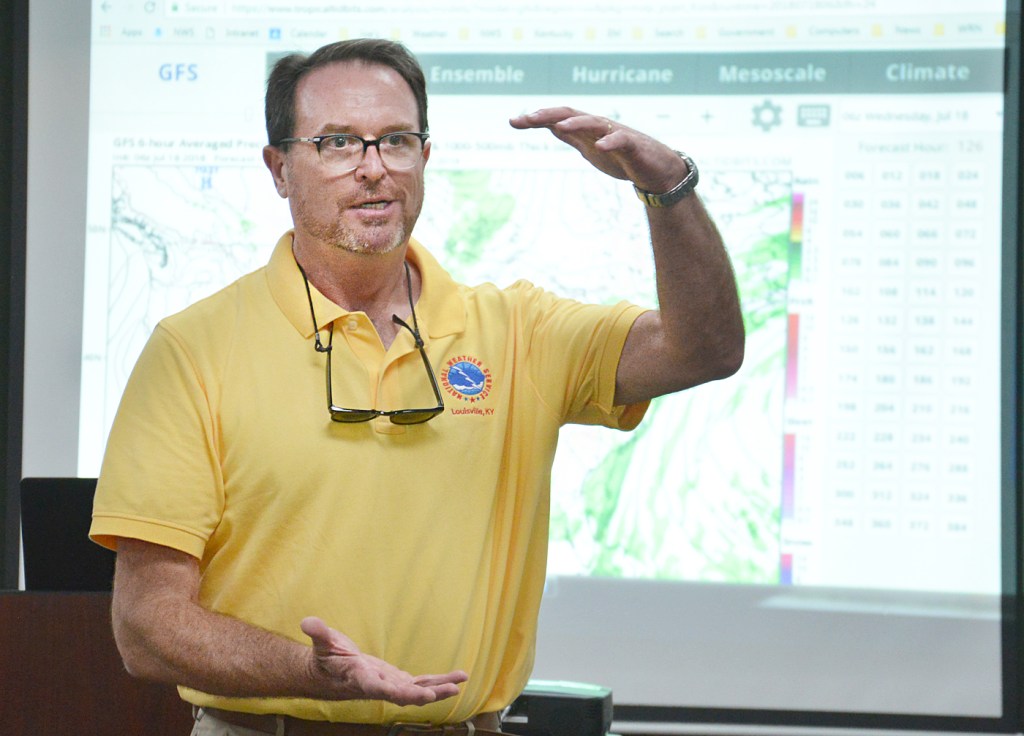 Photo by Robin Hart/robin.hart@amnews.com Joe Sullivan, warning coordinator for the National Weather Service in Louisville speaks to the Local Emergency Planning Committe Wednesday morning. Sulivan explained the importance of "situation awareness" when it comes to severe weather conditions. He also explained how the intensely localized flooding that occurred in Boyle County in late June was not seen by the NWS radar.

The National Weather Service has a blind spot when it comes to predicting inches of rainfall across the country, which may be part of why people in southwestern Boyle County were caught off guard when flash flooding occurred in late June.

That’s according to Joe Sullivan, warning coordinator for the National Weather Service in Louisville, who was the guest speaker at the quarterly meeting Wednesday morning of the Boyle County Local Emergency Planning Committee.

A further complicating factor addressed Wednesday was that residents in the area have poor or no cellphone service, meaning they aren’t able to receive text alerts, check weather on their phones or call for help when their roads, bridges and homes are being flooded.

Sullivan talked about how the NWS tries to protect lives and property during extreme weather events, such as when the North Rolling Fork began flooding due to heavy rains that began June 25.

The NWS has very sophisticated radar equipment that monitors clouds and weather conditions several thousand feet off the ground. But there is a “blind spot” on the ground, he said. “We know what’s up in those clouds, but not on the ground.”

The only way the NWS knows what is happening on the ground in regard to torrential rainfall, damaging winds or destructive hail is from people who call the organization and report what they  see.

“You can’t just have your head in the sand and pull it out when you hear a (warning) siren,” he said. “… Some people think that if the National Weather Service issues a warning then they don’t need to report what they see and hear, because the service already knows it’s severe. But that’s not true. We issue a warning based only on almost exclusively on radar. We’re trying to get people lead time so they can protect themselves.”

Sullivan said the NWS depends on first responders, emergency management staff and even regular citizens to tell them the conditions on the ground.

Sullivan told the group to save the phone number of the Louisville NWS in their cellphones: (800) 292-5588. He suggested naming it “Louisville Weather” or “Weather Service.”

“I don’t care what you call it, as long as you call it when you see something.” Sullivan said, “We want you to help us help you.”

The storms that hit the area on June 25 were extremely isolated, Sullivan said. When looking at the high definition radar, the pixels indicating heavy rainfall were very tiny. And once the radar averaged them out with the surrounding weather conditions at 7,000 feet, the radar failed to “see” the flooding areas.

That’s why emergency crews weren’t warned of the potential flooding.

There are many weather apps available for smartphone users, Sullivan said. They show you exactly where you are, where the storm is and whether it’s coming toward you.

Also, Code Red is an excellent emergency alert system people can sign up for on smartphones. “It’s better than tornado sirens,” Sullivan said.

Boyle County residents can register for this free alert system by going to https://bit.ly/2zOeA99

But the residents of the Forkland area who suffered from the flooding may be out of luck in this regard, because there is very little or no cellphone service in the area.

“There is no communications in Forkland,” Wilder said. “That’s one reason people couldn’t tell us what was going on during the floods.”

Someone during the meeting asked why AT&T hadn’t put up a tower in that area of the county. Wilder answered, “Dollars and cents.”

Boyle County Judge-Executive Harold McKinney said he talked with AT&T several years ago about the possibility of locating a tower there, but it was going to cost about “a quarter of a million dollars … to get a few customers.” McKinney said AT&T told him, “We’re not going to do it.”

However, McKinney said he’s been told “by people who know” that the federal government is going to pay for cellphone and broadband towers across the nation and that Boyle County is supposed to get two of them — one in the southwest end of the county and one in the eastern part.

McKinney said the Danville-Boyle County Economic Development Partnership “has made it pretty much their number one priority” to add cellphone service to the remote areas of the county.

“It’s frustrated me to death,” he said. “But we’ll keep working on it.”