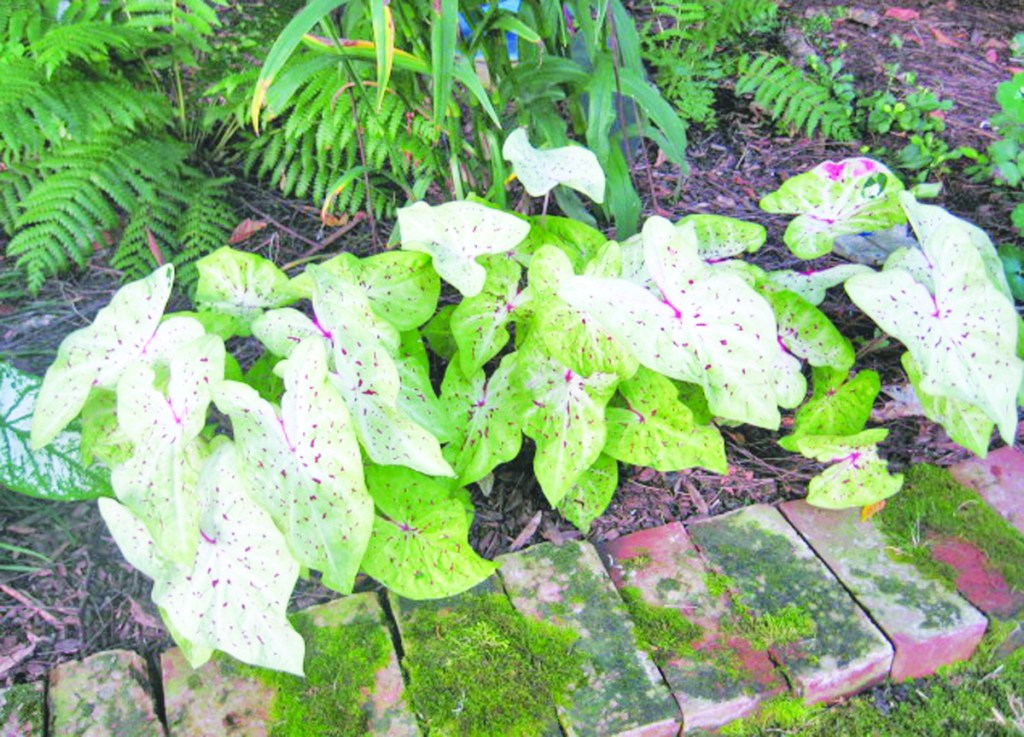 Photos by Susan Jonas A row of petite “Miss Muppet” caladiums edges a planting bed in deep shade. The white leaves speckled with red brighten up a dark corner of the garden

It’s 90 degrees, the humidity is over 70 percent, and rain has been sporadic. By mid afternoon on a sweltering day, the garden looks as limp as I feel. Yet there they are, sailing above the tired groundcover, my trusty caladiums. The slightest breeze catches in their broad leaves and causes a ripple of motion that gives the shady border an illusion of cooler air. This is their kind of weather.

Caladiums are tropical plants, originally from South America. They thrive in warm soil and stifling temperatures. When the heat gets oppressive, caladiums put on their best show. They’re ideal for filling holes in the border this time of year when spring bloomers have died back and other plants may be fading. Many garden centers put their plants on sale half price or better in July. I just purchased four pots of white and pink caladiums to brighten up the darker corners in heavy shade. 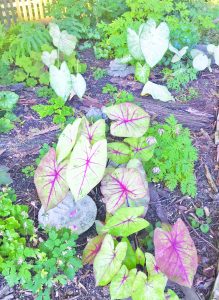 Photos by Susan Jonas
Pink and white caladiums fill the gaps left in a shady border when bulbs and other spring
blooming plants go dormant. Caladiums thrive in the heat and high humidity of a
Kentucky summer.

With over 1,000 named varieties, caladiums range from miniature to giant, with smooth or rippled edges on the heart-shaped leaves that wave at the ends of long stems. There are hundreds of color combinations in white, pink, red, and green, with contrasting veins and spots.

Depending on which varieties you choose, caladiums can be bright and flashy or cool and sophisticated. Although they rarely flower, their beautiful leaves guarantee a colorful show wherever they are planted — beneath trees, between shrubs, in borders, or containers. My garden is too shady for flowers, so caladiums add color to the mostly green background.

Although they grow best in full to partial shade, some will grow in sun if they get plenty of water. The most economical way to grow caladiums is to purchase tubers in spring, or save the ones planted in your garden. Caladium tubers are graded by size. A #1 tuber will have more growth points, or “eyes.” Each eye produces a sprout and the more sprouts, the larger and fuller the plant will be. Healthy tubers are plump and firm. You may still be able to purchase them in some garden centers now but beware of soft, shriveled tubers, which are almost certainly dead.

I’m determined to save the caladiums purchased in pots this summer. Last fall I waited too long and the leaves died back before I dug them up, so they were lost. When nights get cool in October, I’ll dig them up with leaves attached and dirt still clinging to the roots. They will be spread on newspaper in the garage or basement until completely dry, in two or three weeks.

This causes them to go dormant. Then I’ll cut off the leaves, shake the dirt off, and put each variety in a labeled paper bag. They’ll be stored for the winter in a closet. More conscientious gardeners can find precise instructions for dusting them with fungicide and packing them in layers of something or other, but I just toss them in brown paper bags and hope for the best.

Give it a try if you’re growing caladiums this summer. Next May when nights are reliably warm, you can plant the tubers in rich garden soil and practice your patience. Mark the spot, because they won’t poke their pretty little noses out of the ground for several weeks, depending on how warm the soil is. You can give them a head start by potting them up indoors four to six weeks earlier. If you plant them in the shade next to blooming bulbs, they will fill the gap after tulips and daffodils go dormant.

I am almost as fond of caladiums’ larger cousins, elephant ears, growing in big pots. In a mostly green garden the more leaf sizes, textures, and shades the better. Like caladiums, alocasia and colocasia are both plants of the Araceae family. If the leaves point up, it’s an alocasia; if they hang at a downward angle, it’s a colocasia. Either way, they are called elephant ears. 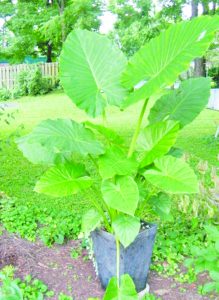 Both alocasias and colocasias are called elephant ears. If the leaves point up, like this
one, it’s an alocasia. Colocasia leaves hang at a downward angle. This alocasia in a tall
pot takes the place of a shrub at the back of the border under a walnut tree, where
many plants would die planted directly in the ground.

They range in color from lime green to burgundy, almost black. Since the ground under our walnut tree is so inhospitable, giant macho ferns and elephant ears in tall pots substitute for shrubbery. A dark burgundy elephant ear in a blue ceramic pot lends a touch of mystery to the border there, where so many plants languish or die.

If you would like more summer gardening ideas, please join the Garden Club of Danville for a private tour of the formal garden at the Ephraim McDowell House, 125 S. Second St., on Wednesday, August 1, at 1:00 p.m. The tour will be guided by Linda Porter, club member and McDowell House Garden Manager. There is no charge. www.thegardenclubofdanville.org.