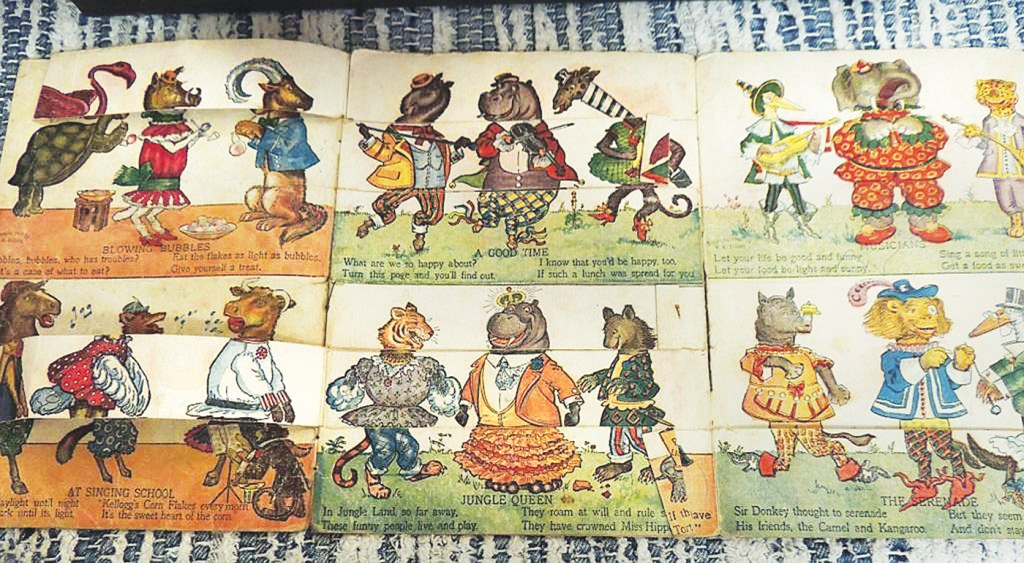 Question: Jerry, this was my mother’s book when she was a toddler. I think that it’s an odd little booklet with the pages that flip over and back and forth and show the animals in different poses and costumes. Its title is “Kellogg’s Funny Jungleland Moving Pictures”. It’s copyrighted 1908. Does it have any value? Could you buy this in stores? Thank you for looking at it.

Answer: Ahhh, I love these books. Yes, you have a flip book. Sections and parts of the book would be moved back and forth to create new images. Flip books had been around for nearly a century already, or longer. But kids were thrilled with the colors and the action. I don’t think today’s kids would think in the same line. But, it’s charming and interesting. 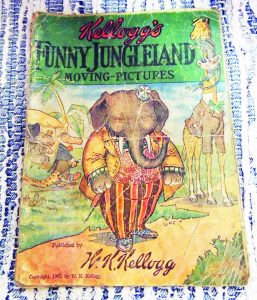 Kellogg’s, the cereal company, was originally founded as the Battle Creek Toasted Corn Flake Company Feb. 19, 1906, by Will Keith Kellogg. Will and his brother John Harvey Kellogg founded this company as an outshoot from their work at the Battle Creek Sanitarium that was based in practices of the Seventh-Day Adventist Church. A very cutting edge health and well being hospital / spa of its day. Almost from the beginning, Kellogg and its cereal products were wildly successfully from the get go. The company was renamed the Kellogg Company in 1922.

Your little book was a premium — a gift that you could receive with collecting and mailing in box tops. Its one of the very early promotions that the company did. The condition of you booklet has much bearing on its value. It’s very worn and much loved. Your mother must have enjoy it a lot.

When I did some online research. I found prices all over the board. It was even listed in Amazon. However, I think with the condition, at least it’s all intact, in a retail store it would be priced at about $14. Keep it dry and flat and out of the sun, and it should last another 100 years. Thanks for a great question.