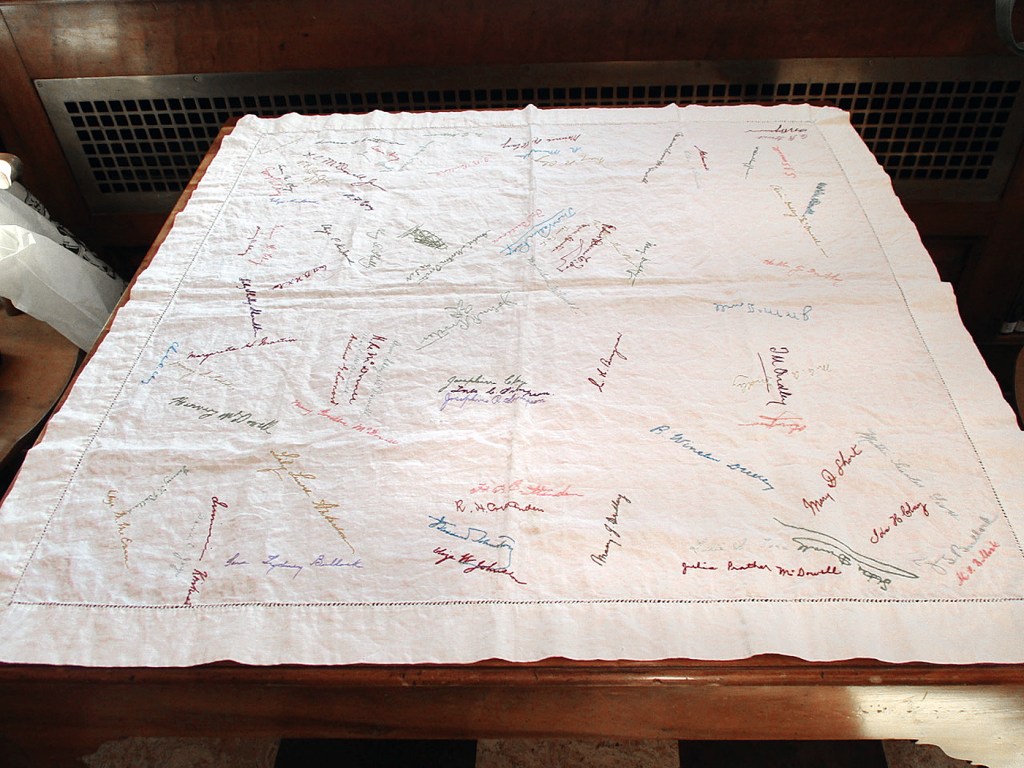 Photos contributed Signatures of people are embroidered on this linen tablecloth.

A small linen tablecloth with 88 names of people apparently associated with the Henry Clay family in Lexington was recently found in a throwaway bin at a Danville market.

Joni Morgan of Danville found the tablecloth in a thrift store while rummaging through towels and rags for use at the local humane society.

She took the cloth to the Henry Clay Estate in Lexington to check it out.

Eric Brooks, curator and site manager, said it was unusual to have all the names written on the tablecloth. 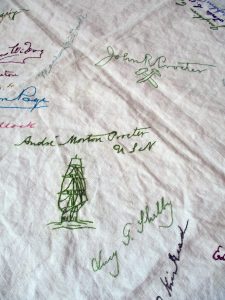 Brothers John R. and Andre’ Procter signed their names and with the branch of the armed services they served.

“It is clearly something done at a gathering of high-end upper class of Kentucky families,” he said. “It would have been great to have the name of the event on the linen cloth. We really don’t know where it came from nor the exact date.”

Names on the 33-by-33-inch square tablecloth apparently were written with a lead pencil and embroidered with different colors of thread.

The names included signatures of people who were either members or friends of the Henry Clay family. His four children: Ann, Henry Jr., James and Thomas are listed with others that included friends politicians, writers, attorneys and others include:

• Madeline McDowell Breckinridge, sister of Henry C. Breckinridge McDowell and wife of Desha Breckinridge. She was a leader of the women’s suffrage movement and also helped establish the Kentucky juvenile justice system.

• John R. Procter Jr., a U.S. Army captain, retired, was a Kentucky geologist from 1880 to 1893, and president of the Civil Service Commission under President Grover Cleveland. He was a native of Maysville in Mason County, a graduate of the Naval Academy and served in the Spanish-American and both world wars. His signature included a claw and pick insignia below it.

• Procter’s brother André Morton Procter’s signature has a ship and “USN” underneath it.

Page was an American writer and lawyer. He also served as U.S. Ambassador to Italy during World War I when Woodrow Wilson was president. A native of Virginia, Page wrote a book, “Italy and the World War”, a memoir of his service in Italy. He also wrote articles for Harper’s Young People, an illustrated weekly, and read some of his work in the 1890s in Danville and Lexington.

Fox, a native of Bourbon County, wrote the Civil War-based “The Little Shepherd of Kingdom Come.” He also was a writer for the New York Times and settled in Big Stone Gap, Virginia.

Wilson was a Kentucky artist who painted “Springtime in the Mountains” and was recognized in 1890 as “Kentucky’s best poet.”

• Lillie L. Anderson, was said to be “one of most popular belles in Danville” in 1911. She was the daughter of Col. and Mrs. George Anderson of Maplewood in Danville.

• Annie Clay Goodloe of Danville, who was married to Andrew G. Leonard of Lexington in 1891.

• Lucy G. Shelby of Lexington was a frequent visitor of the Shelbys at Arcadia.

• Magdaline McDowell, daughter of Henry Clay and Ann Clay McDowell, and wife of Desha Breckinridge. She was a great-great-granddaughter of Samuel McDowell of Danville.

• B. Winslow Dudley, a friend of Henry Clay, was named in Clay’s will.