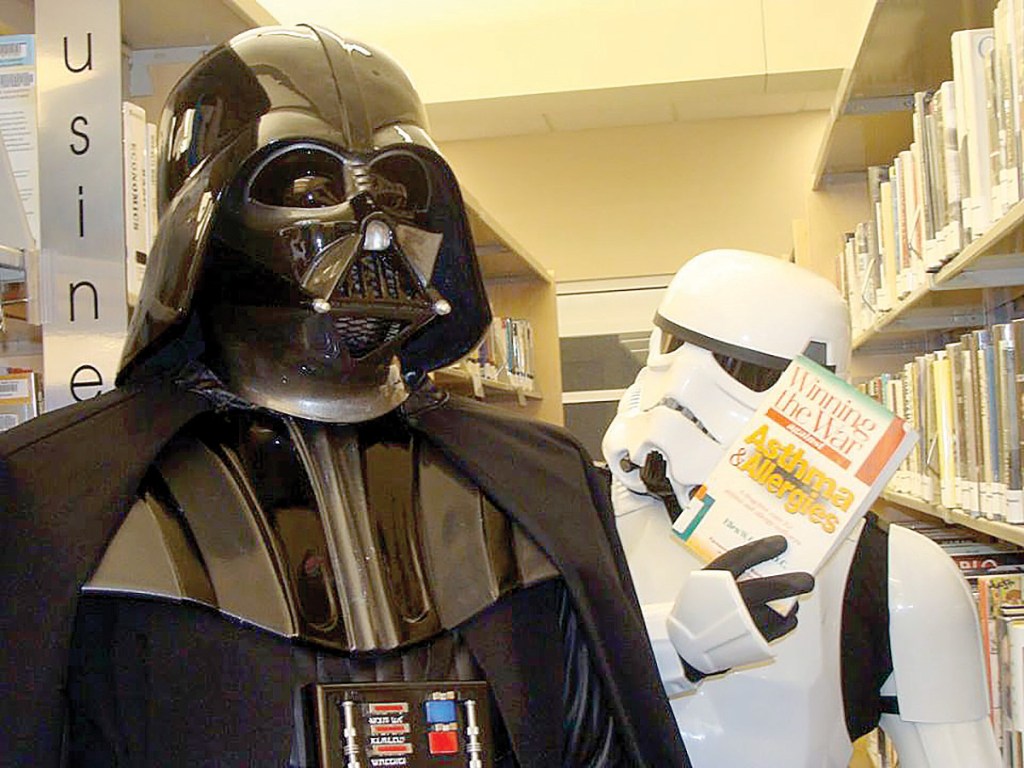 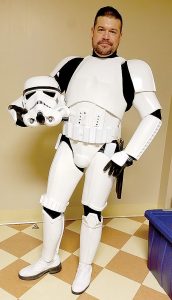 During the day, Brian Bentley spends his time in Harrodsburg as a special education teacher for Boyle County High School. During the night however, he is a “bad guy doing good” for the galactic empire.

Bentley is a member of The 501st Legion, a worldwide charity costuming organization formed in 1997. Members of The 501st Legion dress up as villainous characters from “Star Wars,” and do appearances to promote charities, and to raise money and awareness for a variety of causes. The 501st Legion is famous for their appearances at children’s hospitals, public libraries, movie premieres and schools. All members of the Legion are volunteers and do not charge for appearances. There are 13,252 active members worldwide across 40 countries.

The Legion is divided into “garrisons” based on location — Kentucky’s garrison is known as the Bluegrass Garrison. Garrisons are further divided into squads to promote local involvement. Kentucky is home to the Blue Sun Squad, covering Lexington and surrounding areas, and the Derby City squad, covering Louisville and surrounding areas. There are 78 active members in Kentucky — two in Harrodsburg, and two in Danville, one of which is still finishing his costume.

Of the many Star Wars villains, Bentley elects to dress as a stormtrooper. “Being a stormtrooper is kind of a dream come true,” he said. “What kid growing up in the 70s and 80s was not captivated by Star Wars.”

Bentley recalls spending countless hours when he was younger playing with Star Wars action figures. He is thankful to be able to become a character from the series and bring smiles to kids faces.

“It is a very rewarding hobby, being able, even if only an instant, to bring joy to someone who is sick or dealing with problems” he said. 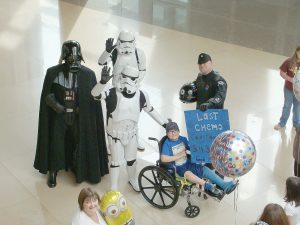 (Photo contributed)
Brian Bentley, dressed as an Imperial Stormtrooper, pushes a child in a wheelchair celebrating the completion of his last chemotherapy treatment.

The stormtrooper says he is motivated by his love for Star Wars, but his reason for joining The 501st Legion runs much deeper than his interest in the series. In 2003, Bentley learned of the group and the charity events they participated in, and their hospital involvement reminded him of when he was younger.

“As a child, I had spent a lot of time in Shriners Hospital for hip problems, and later in life a cancer survivor,” said Bentley. July 12th of this year marked six years since Bentley’s last cancer treatment. He added that being able to bring joy to children in similar circumstances as his own and give them memories they will never forget is what motivates him.

The 501st Legion participates in several events throughout the year for any charity that sends in a request. Bentley has attended events to support the Juvenile Diabetes Research Foundation, Make-a-Wish, National Down Syndrome Society, Action for Autism, Autism Society of the Bluegrass, Lexington Children’s Hospital and Mitochondrial disease awareness.

“We even raise money at comic conventions. We have a ‘Blast-a-Trooper’ booth, where people shoot Nerf guns at the stormtroopers for donations to the requested charity,” said Bentley. At the Lexington Comic and Toy Convention, members of The 501st legion raised money for the Lexington Children’s Hospital. 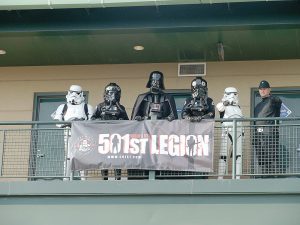 (Photo contributed)
Members of The 501st Legion, outfitted in costumes of various Star Wars villains, hold a banner with their logo and website on it.

On the non-charity side, Bentley has made appearances at movie theaters for the premieres of new Star Wars movies to help promote the film and get people excited before going in. He has also had a few opportunities to be a backup dancer, in full armor, at multiple Weird Al Yankovic concerts during some of the comedian’s Star Wars parodies.

Bentley was told by a fellow Legion member prior to his joining that “being a stormtrooper feels like being a rockstar,” and adds that although he thought at first it was an extreme comparison, he gets it now.

“Everybody is happy, they want their picture with you, you bring smiles to everyone’s faces,” he said.

Although he says he enjoys the fame and the limelight, the rockstar life isn’t want makes him continue participation in the program.

“The truly best part of being a stormtrooper though, is those special events when you are doing an event for a particular child, or group of children dealing with severe health issues,” he said. “Despite their pain, their struggle, you can bring them just a little joy. Knowing what they are going through, and seeing them smile despite that, is true fulfillment.

Bentley said despite the good The 501st Legion does, there are downsides.

“The outfit is hot. I have a fan in my helmet, which does help somewhat, but that armor does not breathe,” he said. Bentley marched with several costumed people in a parade during a heat index of 106, but said at the conclusion of the parade, everyone smiled as they removed their helmets because of the joy that was created by their efforts. 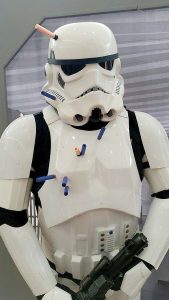 (Photo contributed)
Brian Bentley’s costume is covered in rubber nerf bullets after participating in the ‘Blast-a-Trooper’ booth at Lexington Comic and Toy Convention to raise money for Lexington Children’s Hospital.

Participation in The 501st Legion relies heavily on costuming. The process is different for each costume, depending on the outfit. Most consist of some type of armor, but others are cloth and can be sewn.  Members can choose to dress as any of the Legion approved villains. Variations of troopers include the stormtrooper, snowtrooper, swamptrooper, sandtrooper, shoretrooper and many more.

Other characters permissible include Darth Vader, Boba Fett, Jawa and Emperor Palpatine. Costumes can range from a few hundred dollars to several thousand depending on the character.

All of the costumes worn by members in the Legion are fanmade. Kits can be acquired, but must be made to fit the individual.

“Each person cuts and fits each suit to them,” said Bentley. “It can be a very expensive hobby, but there are cheaper options for those who just want to get involved,” he said. The 501st Legion website recommends those who are looking for a cheaper option to look into dressing as an officer, as there are many variations, and many of the choices can be sewn by members themselves.

For the different costumes, and what their requirements are, visit  www.501st.com.