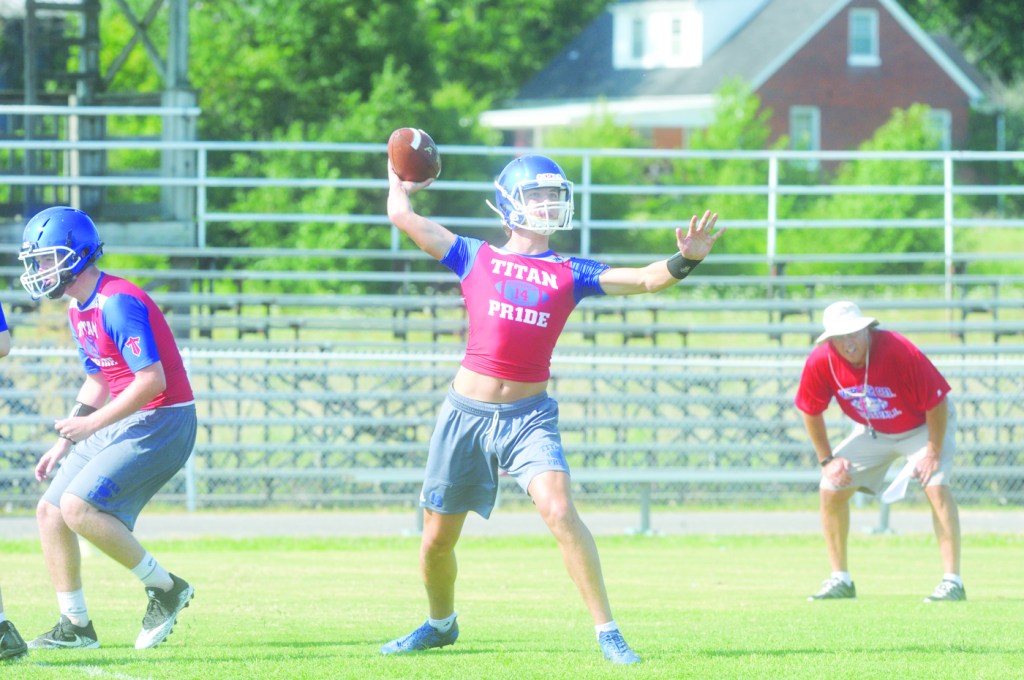 Photos by Matt Overing/ matthew.overing@amnews.com Mercer County’s Kaelin Drakeford has been taking reps as the starting quarterback for the Titans. He’ll also be asked to do more on the basketball court later in the year after a strong summer of AAU basketball

HARRODSBURG — For Mercer County junior Kaelin Drakeford, everyday — and every sport — is a chance to get better.

And because of that, Drakeford stays busy. 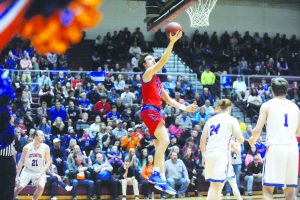 For example, go back to the middle of March. Mercer County’s basketball season had just ended in the 12th region championship after a loss to Southwestern. That next week, Drakeford was out on the football field for spring practice in the afternoon.

Practice ends, Drakeford exchances his pads and cleats for basketball shorts and sneakers, then heads to AAU summer basketball practice that night.

The basketball talent is obvious with Drakeford: Last year as a sophomore for Mercer County, Drakeford averaged 7.8 points and 3.5 rebounds a game.

Through the first two months of his summer ball season playing for the CKY Magic, the numbers are even more impressive. Drakeford was the team’s second leading scorer, leading rebounder, leader in steals and leader in assists — and hit the game winner with four seconds left in a game the first weekend in July.

It’s easy to see why Drakeford’s confidence is growing.

But his head high school coach says it’s not the shots he makes but one that he missed that shows you just how confident he and his coaching staff are in his ability.

“Kaelin had that ‘it factor’ that he wanted that ball on that last shot (versus Southwestern in the region finals),” said Mercer County boys basketball coach Josh Hamlin.

That’s going to be a perfect barometer and indicator of how good and confident our team is going to be this season because he was willing to take that shot as a sophomore.”

Mercer County’s basketball success will have a lot to do with the play of Drakeford — as well as his teammates like Carter Baughman and Jamisen Lewis.

The same could be said for Mercer County’s football success, as well.

“I don’t think I can overstate it,” said Mercer County football coach David Buchanan. “He’s very athletic, he’s got good leadership ability. I wish I had two more of him to start one at wideout and one at free safety.”

Unfortunately, though, Buchanan only has one Kaelin Drakeford. And he’ll be starting him at quarterback a season after he played in the defensive secondary, collecting three interceptions and a fumble recovery. Offensively he caught 10 passes for 215 yards.

“In 27 years in coaching I think he’s one of the more athletic guys I’ve coached at quarterback. He’s an exceptional athlete,” Buchanan said.

Drakeford will give Mercer County the ability to gain yards with quarterback scrambles this year and he acknowledges that.

“I feel like that’s my best attribute. I can probably run better than I throw and I feel really comfortable running,” Drakeford said.

But Buchanan won’t let him get off that easy.

“He’s throwing the ball extremely well and he’s really a much better passer than what people would expect from someone that athletic,” Buchanan said.

His athletic ability is evident but it’s not just athletics where Drakeford excels: The 6-foot-5 junior also excels in the classroom and has already scored a 25 on his ACT. It’s just another way that Drakeford is able to beat his competition — by outplaying them or outsmarting them.

“This summer there was a game where he looked at me and said ‘coach, lets try this play.’ We tried it and we scored and I looked over and he said ‘I just saw something I didn’t know if you were seeing out there,’” Hamlin said. “That speaks to his level and his ability.”

Buchanan agrees with Hamlin. It’s natural to expect there to be some hiccups, even if they are minor, as a football team transitions from one quarterback to the other. Especially when that quarterback didn’t throw a single pass last season, as is the case for Drakeford.

But Buchanan says Drakeford has picked up the offense almost seamlessly.

“I think the thing I’ve been really pleased with is his comfort level in our offense up to this point,” Buchanan said. “He’s already very comfortable with how to check our run game. He just looks very, very comfortable running our offense in addition to the skill he has as a passer and a runner. He doesn’t act like this is his first year playing quarterback.”

Buchanan says there are no limits to what Drakeford, and the team, can accomplish if they play to their potential.

“I think we can accomplish anything we set our minds to. We’ve got some good pieces like Bryson Yeast, Malachi Yulee. I think we can really make some noise.”

And when football ends and basketball begins, expect Drakeford to, again, play a huge role.

“I’m expecting another really, really good year. I think we have two of maybe the top five players in the region (Drakeford and Baughman) and our region is going to be really good this year,” Hamlin said. “And that speaks volumes to how good Kaelin Drakeford really is.”