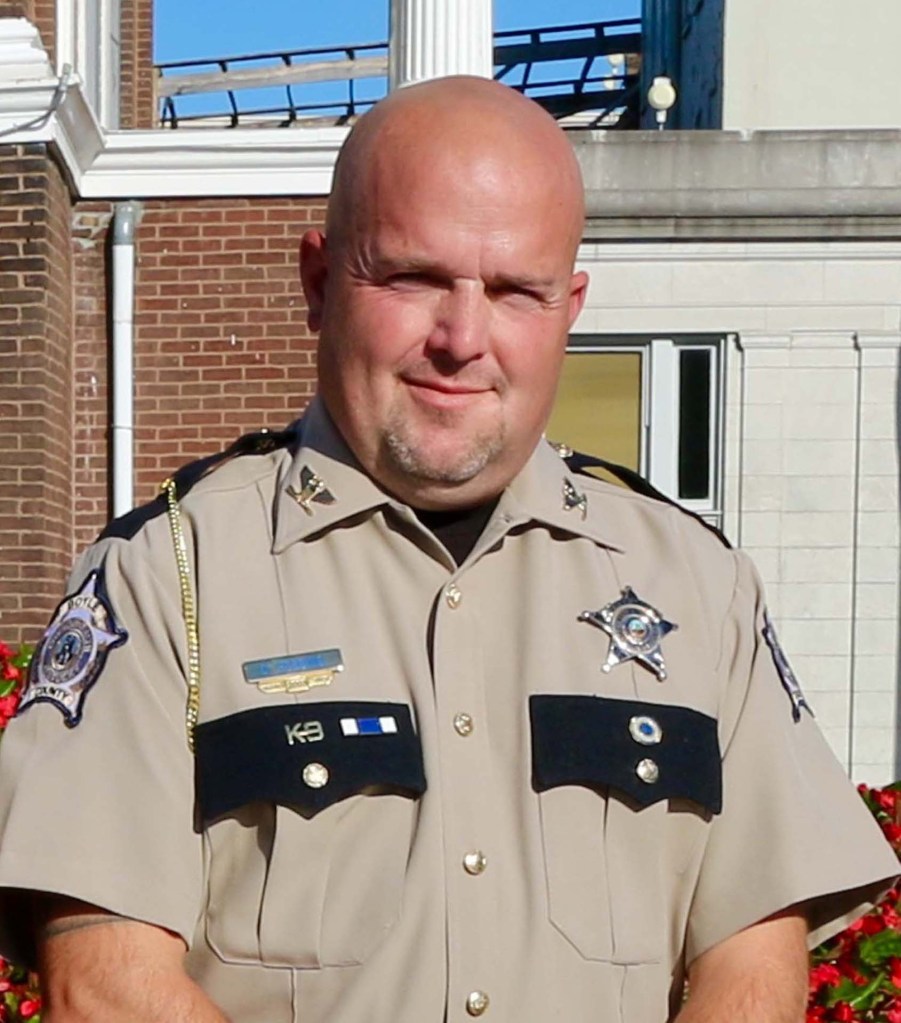 Robbins: ‘I think we’ll be able to come up with something’ after city’s SRO program ends

Boyle County Sheriff Derek Robbins says his office is planning to help provide law enforcement coverage for the Danville Independent School District after the Danville Police Department had to end its school resource officer program due to short-staffing.

“The sheriff’s office will make sure that the Danville schools have some type of resource out there. We’ve been talking to the new superintendent — we’re going to do what we can to make it happen,” Robbins said.

The sheriff’s office didn’t know Danville wasn’t going to be able to supply an SRO until news broke after a special called board of education meeting last week, Robbins said.

“That next day, I had some parents contact me who were concerned, and I’ve met with some people in administration at the school board there,” he said. “I think we’ll be able to come up with something. We’re short-handed, too, but if there’s anything that’s at our highest priority, it’s protecting our children. It’s expected — especially if we’ve always had one. So we’ll be providing at least one to Danville.” 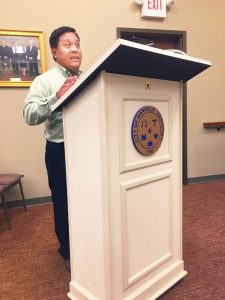 Bobbie Curd/bobbie.curd@amnews.com
Leo Labrilazzo, principal of Hogsett Primary School, spoke to Danville City Commission Monday to express his concern about the lack of police manpower available to fill a school resource officer position. “…The thought we’re not having that position is very scary,” he told commissioners.

The plans on how to accomplish that haven’t been finalized, he said, and he deferred to Superintendent Tammy Shelton for any further details on the plan. She wasn’t available for comment Tuesday.

The issue of having a school resource officer came up at the Danville City Commission meeting Monday night, as well.

Leo Labrillazo, principal at Hogsett Primary School, told commissioners he wanted to emphasize publicly what an important role school resource officers play. He said the idea of funding not being available for SROs is concerning.

“In the time when we’re actually wanting more coverage, the thought we’re not having that position is very scary,” Labrillazo said.

Having an officer’s presence in the schools serves much more of a purpose than just being the muscle of the police department, he said.

“Being able to be preventative — what they can do to help with being the liaison between the school system, students and families … I just wanted to say I hope more consideration is made to creatively come up with funding for an SRO,” Labrillazo told commissioners.

The commission was just at a quorum with commissioners J.H. Atkins, Denise Terry and Kevin Caudill; Mayor Mike Perros and Commissioner Rick Serres were absent.

Atkins said, “The SRO thing, it’s not a funding issue — it’s a personnel issue. It’s about us having enough officers to put on the streets as well as in the schools. We’ll definitely be keeping focus on that, but it’s a manpower issue, not a funding issue.”

Although that statement is technically correct, Chief Tony Gray said on Tuesday that it still comes down to pay.

“Our lack of staffing is because we feel like it’s a funding issue. We feel like a lot of people are leaving because of that. So, it’s not that (the city) isn’t going to fund the position, it’s because we don’t have enough officers staying on.”

Gray said there will still be presence in the schools, but not a full-time presence. “I’ve talked to (Danville Superintendent Tammy Shelton) about some possible solutions, but none of them are a permanent fix at this time.”

Gray said the department lost three or four officers in 2017; now Asst. Chief Robert Estill will be leaving, and a newer officer turned in a resignation last week. Plus, two will be retiring in December and two more next June.

“So, even though we have four in the academy, plus two that are preparing to go … that’s six not on the road yet. There’s a lot of things you can say about why we’re not attracting officers,” Gray said.

For one thing, he said the climate in law enforcement isn’t what it used to be.

“We’ve taken a black eye — for lack of a better phrase to use — due to what’s gone on nationally, that has hurt,” Gray said. “The retirement and benefits are not as good as they used to be — nowhere close, with the governor’s pension reform. So, law enforcement is down in agencies across the state.”

“They’re trying to attract (their new officers) from agencies our size. We’ve lost three or four officers in the last couple of years to the state police. Those guys are coming out making quite a bit more money than what they’re making here, even though they’re here for three to four years,” Gray said.

“They’ve all increased their pay quite a bit for certified officers,” Gray said.

He said the police department is trying to run patrol with 23 officers, and former SRO Chase Broach has been reassigned back to patrol to make that happen.

When the end of Danville’s SRO program was announced at the Danville Board of Education meeting last week, Officer Chase Broach told board members the SRO position had existed since 2011 and he had served as the SRO the entire time. He said he has developed relationships with students and teachers, as well as served as coach for multiple athletic teams.

Broach said the position is a “chance to put someone in the schools for the police to be seen as a good person. And now more than ever as we transition with time, social media, current events, we’ve got to have that person in the school.”

He told the board when he came to the department in 2006, there were two K9 officers, up to five detectives and the force was 32 strong. Today, the department has no K9 units, and there’s a serious problem with officer retention, Broach said.

The city commission heard from 13 firefighters and police officers in May who said the city isn’t paying enough to retain good first responders. Those first responders spoke up after the commission voted to increase the pay for commissioners and the mayor by 50 percent — a change that goes into effect Jan. 1.

By contrast, Danville’s 2018-19 budget for police pay is more than $1.6 million; and the city plans to pay its firefighters more than $1 million, according to information provided by City Manager Ron Scott in May.

City Manager Ron Scott announced earlier this month that Danville would offer some employees $1 raises based on how long they had worked for the city. The raises are being done in advance of a salary study that could determine further changes in how much the city pays employees, according to Scott.

Gray said the “across-the-board thing” Scott did is a step — “Some would have only gotten a 3-percent raise, so for those who got $1, it’s at least a step.” But many still earn a salary as low as the 25th percentile on the KLC survey, meaning about three out of four officers in comparable cities make more. Many of Danville’s firefighters and police officers earn salaries that fall below the 50th percentile, according to the survey.

“I think we do need to look at our compensation package as a whole and compare it to agencies with our capabilities and size, and see if we’re competing at that same level,” Gray said.

Tuesday, Principal Labrillazo said in his years of working in public education, “I know first-hand how influential SROs can be — and just such a positive force. It just really hits close to home when I think of the prospect of not having an SRO.”

He thinks the position is a key part of what relationship-building is about — and there are so many parts, he said.

“There’s students, there’s the school, there’s family and community. I feel like having an SRO helps to build that communication and understanding, in both directions,” he said. “By having SROs in the building, it builds that confidence within students to know officers are there to help them. Even in elementary schools, an officer shouldn’t be something that’s out of place or uncommon.”