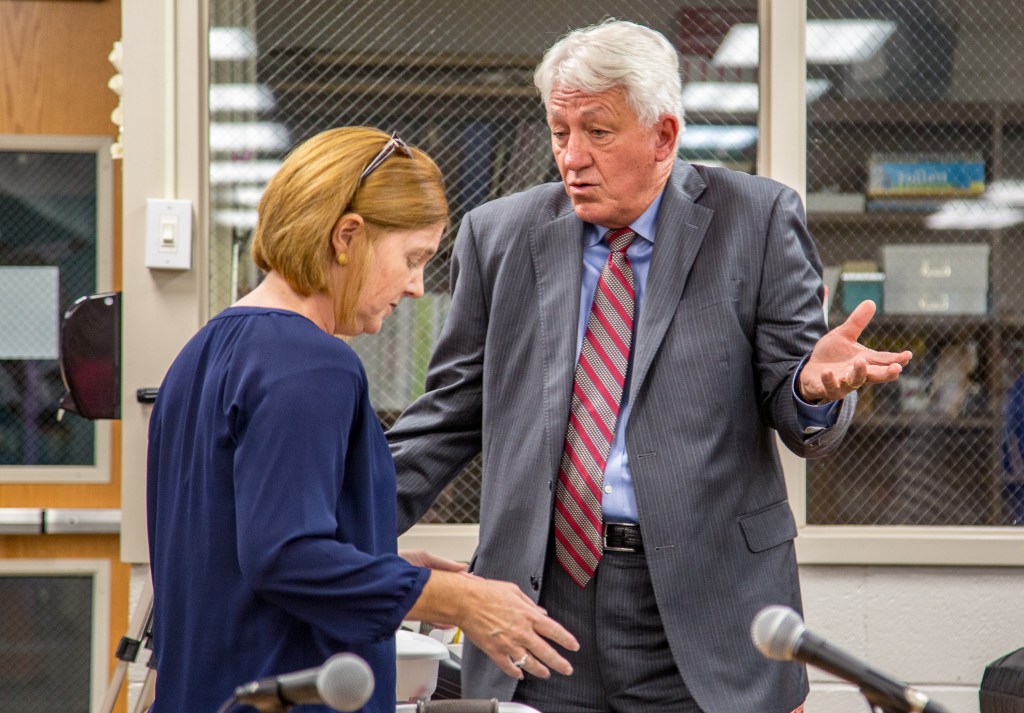 Ben Kleppinger/ben.kleppinger@amnews.com Craig Cox, right, advises Danville Board of Education Chair Paige Matthews prior to the start of Wednesday's special called meeting. Cox was appointed as legal counsel for the board for the demotion hearing process, because the board's usual counsel had the duty of representing former Superintendent Keith Look.

The Danville Board of Education voted unanimously Wednesday evening to overturn the demotion of a high-ranking school district administrator.

“We are very pleased that the school board made the proper decision in overturning the demotion of Ed McKinney,” said Matthew Walter, an attorney representing McKinney. “Ed is a fine man that has devoted 27 years of his life to the Danville Schools. Having had him as a teacher and coach, this is especially gratifying to me. With today’s decision, hopefully the district can move forward from the tumultuous tenure of Dr. Look.”

McKinney, who has served as the district’s director of pupil personnel and the coach of the Danville Admirals basketball team, was demoted by former Superintendent Keith Look on May 8, according to Walter and a personnel report given to the Board of Education by Look on May 21.

McKinney contested the demotion, which resulted in a four-hour-plus confidential demotion hearing before the board on Monday. The board did not take action following the hearing, choosing instead to call a special meeting Wednesday evening. After spending about 20 minutes in closed session, the board members voted 5-0 to overturn the demotion and quickly adjourned. 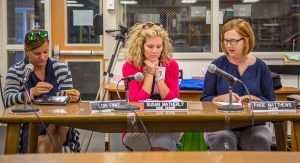 Board Chair Paige Matthews said McKinney is currently still employed and “has never not been employed” by the district since the demotion took place. Since the board effectively did away with the demotion, it means McKinney still holds an “administrator” position in the district, according to board members. But it will be up to new Superintendent Tammy Shelton to establish what exactly McKinney’s job will be, they said.

After Look, whose contract was not renewed by the board at the end of last school year, demoted McKinney, there was also a restructuring of the district’s positions, which “effectively eliminated Mr. McKinney’s position,” according to Walter.

While McKinney had been the director of pupil personnel (known as DPP), that position doesn’t exist on a list of certified and classified job assignments for the current school year given to the board by Look on May 21. But Ron Ballard is listed as the “Director of Student Support” on that list.

On a new organizational chart released last week by Shelton, Ballard is listed as the “Director of Support Services (DPP).”

Ballard, who has worked in the district since 2002, served as principal of Toliver Elementary School last school year before being promoted to the central office for this year, a plan that was announced in February.

Board members said Wednesday their job in the process is complete — there can be no appeal of their decision and they do not play a role in setting McKinney’s job duties.

Board Chair Matthews said the board is unable to comment publicly on why it chose to overturn the demotion. Shelton could not be reached for comment Wednesday evening.