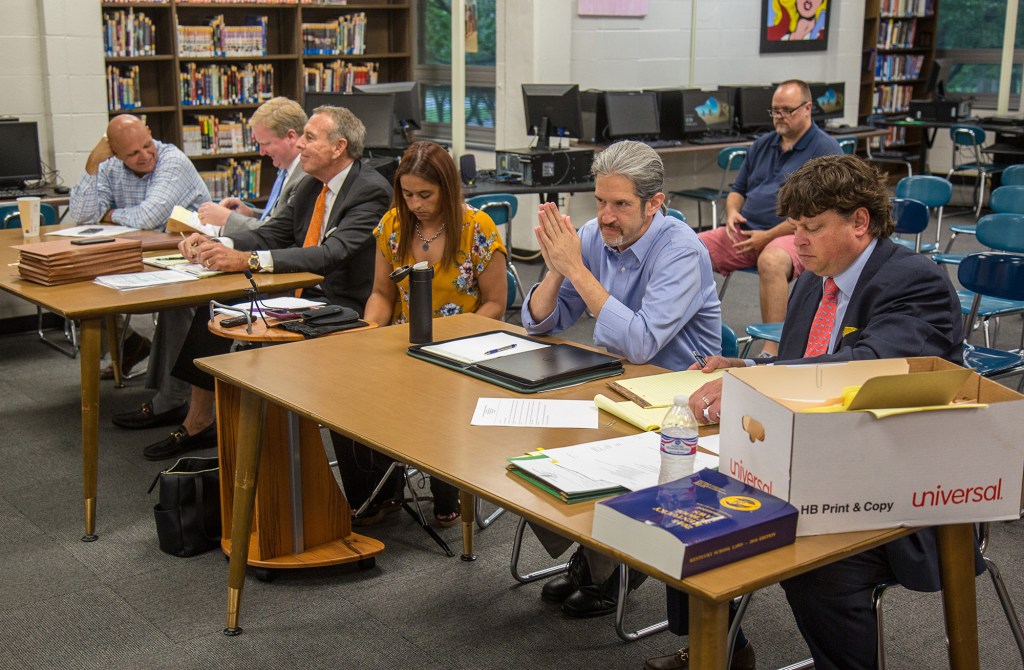 File photo Ben Kleppinger/ben.kleppinger@amnews.com Parties wait for a demotion hearing to begin in the Danville High School library Monday morning. From left are Ed McKinney and his attorneys, Matthew Walter and Ephraim Helton; and former Danville Superintendent Keith Look and Chris Tucker, a school board attorney.

The Danville Board of Education could decide today whether to uphold the demotion of one of the school district’s highest-ranking administrators.

Ed McKinney, the district’s former director of pupil personnel, was demoted by former Superintendent Keith Look on May 8, according to McKinney’s lawyer, Matthew Walter.

McKinney contested the demotion, which led to a hearing in front of the school board that lasted for more than four hours Monday. McKinney got to choose whether the hearing would be held in public or private; he elected for it to be private.

The board did not make a decision on Monday; it has called a special meeting for 5 p.m. today when it could announce a decision.

“Dr. Look improperly demoted Ed McKinney, DPP of the Danville Schools on May 8, and later that day recommended to the board central office restructuring that effectively eliminated Mr. McKinney’s position, meaning that if the demotion is not upheld by the board, Mr. McKinney still has no job to go back to,” Walter wrote to The Advocate-Messenger in an email on Friday.

“It appears from the minutes of the meetings that the board was not made aware of Mr. McKinney’s demotion when they voted on Dr. Look’s recommendation to restructure central office, constituting a clear violation of KRS 160.390, which requires that all personnel actions undertaken by the Superintendent appear in the minutes of the next board meeting.

Minutes from the board’s May 21 meeting include a detailed report of “personnel activity” provided by Look to the board. Under “discipline” in the report, it states that “demotion of a certified employee” occurred on May 8.

The report also includes a list of certified and classified job assignments in the district for the 2018-19 school year. McKinney’s name does not appear in that list, but Ron Ballard is listed as the director of student support. On an organizational chart released last week by new Superintendent Tammy Shelton, Ballard is listed as the “Director of Support Services (DPP).” DPP — director of pupil personnel — was McKinney’s position in the district.

The plan to make Ballard director of support services was apparently in the works before McKinney was ever demoted. According to news archives, the school district announced in February that Ballard would take on his new role after serving as principal of Edna L. Toliver Elementary School.

Ballard first began working for the school district in 2002, according to school records. He served as interim principal at Toliver for the 2014-15 school year and as principal beginning in the 2015-16 school year, according to news archives.

Monday’s hearing began at 9 a.m. in the Danville High School library. McKinney and his lawyers sat at one table; Look and his counsel sat at another. Both faced the five members of the Board of Education.

Craig Cox of Bertram, Cox & Miller was appointed as advisor for the hearing.

Board Chair Paige Matthews asked whether McKinney wanted the hearing to be conducted in public or private. McKinney’s lawyers said he had elected for it to be private. The board then voted to go into executive session. The meeting continued behind closed doors until after 1 p.m., according to information provided by central office staff.

In order to arrive at a demotion hearing before the school board, there are several steps required by state law:

• The superintendent must give the administrator written notice of the demotion.

• The administrator then has 10 days to file a statement of “intent to contest” the demotion.

• The superintendent must then provide in writing the “grounds for demotion,” including “where appropriate, dates, times, names, places and circumstances,” as well as a date, time and location for a demotion hearing.

• The administrator must file a response to the grounds for demotion within 10 days.

According to state law, the school board has “five days from the close of the hearing” to take official action and “advise the parties of its decision.”

Walter said Tuesday neither he nor McKinney would have any further comment on the situation until after the board makes its decision.