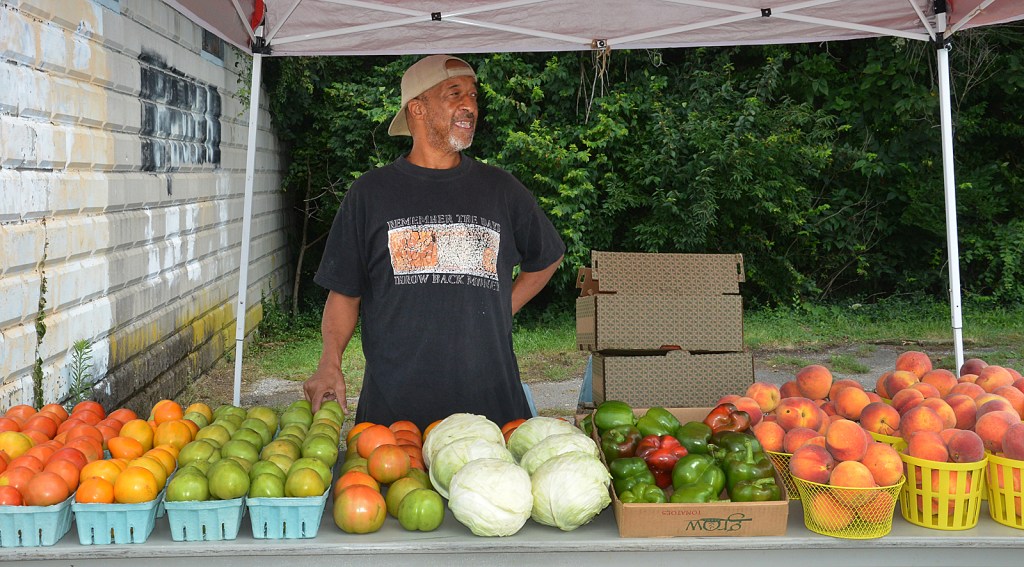 If you have a hankering for homegrown tomatoes, cabbage, melons and beans, but don’t want to wait until Saturdays to visit Danville’s local farmers markets, there is a surprise on South Second Street.

Terry Doneghy has set up a small stand with produce he and his brother, Purnell, grow to sell on Mondays, Tuesdays, Fridays and Saturdays. He’s also selling fresh South Carolina peaches.

“Just wait until the Sugar Babies come in,” Terry said describing the type of watermelons about to ripen.

Doneghy’s stand is set up under a red awning next to a vacant, small stone building that was once a neighborhood store. The property, along with a neighboring house is now owned by his family.

Waving at a passing car, Doneghy says he likes being out and seeing the people. “I get to socialize” and visit with old friends and classmates he hasn’t seen in a long time. Sometimes people stop and talk a while, Doneghy said, just as somebody parked nearby, got out and pulled up a chair.

Terry Doneghy watches people pass by as he stands behind his produce stand on South Second Street Tuesday afternoon.

Anthony Ford, left, looks over fresh tomatoes that Terry Doneghy was selling Tuesday afternoon. Ford had just gotten off from Burke’s Bakery where he’s worked for 41 years. Doneghy said he and Ford were in high school together, but hadn’t had a chance to visit for a long time.

Doneghy said he had just picked these peppers Tuesday morning.

Terry Doneghy takes a bag of green peppers out to his aunt when she stopped by Tuesday afternoon.

Terry Doneghy visits with someone who stopped by his stand to pick up a few peppers on Tuesday.