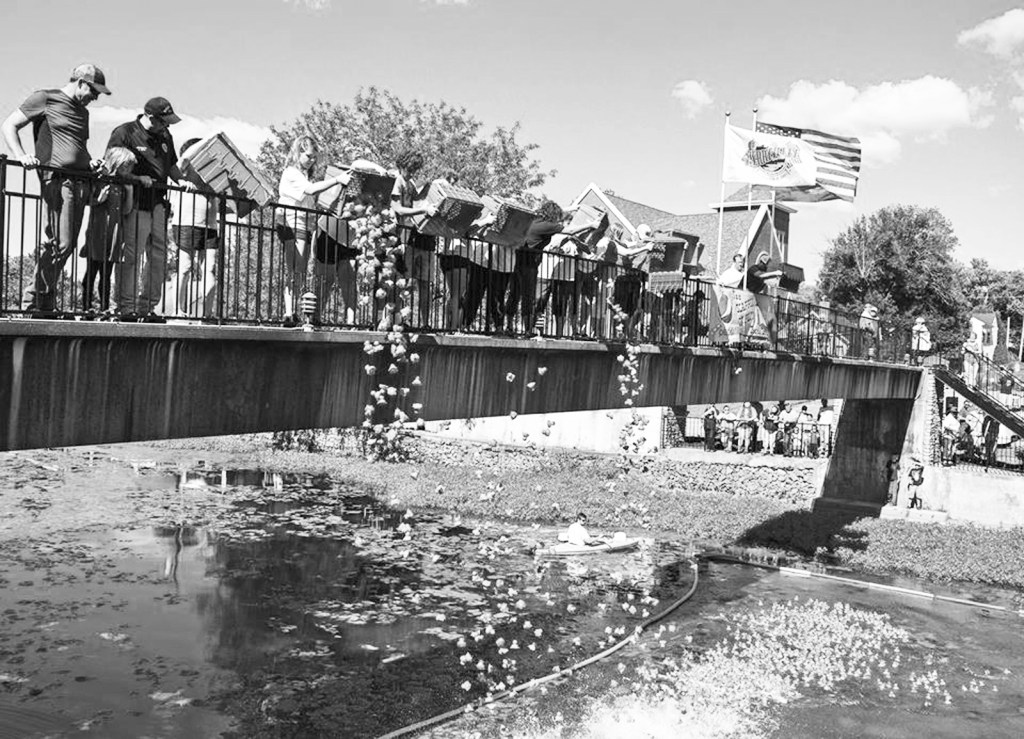 Main Street Perryville’s third annual Snappin’ Chaplin Turtle Derby has come out of its shell and will be going on all day Friday and Saturday for the third annual event.

The event is the biggest fundraiser of the year for the organization, said Vicki Goode, executive director of Main Street Perryville.

According to a news release, all proceeds are used for MSP to enhance the historic downtown and promote its economic development. To help do this, MSP wants to continue repairing and renovating the town’s 11 historically significant 19th-century buildings located on Merchant’s Row, which is one of the oldest intact commercial districts in the United States.

The actual Snappin’ Chaplin Turtle Derby takes place Saturday evening, when at least 2,000 rubber turtles will be released from the footbridge over the Chaplin River at 7 p.m. Anyone over age 18 can “adopt” a turtle for $5 or a “nest” of six for $25. Once the turtles are turned loose and float down the river a short distance, they’ll be funneled through a wedge of pool noodles and guided into a trap. The first three turtles to cross the finish line and into the trap will win cash prizes for the people who “adopted” them — $1,000, $600 and $400.

“It’s so much fun,” Goode said. “People really get into it.”

Last year, there were 3,000 people on both sides of the river following the turtles. Once the turtles were rounded up, the spectators walked back to the to the main area and and were excited to find out who won, Goode said.

Goode said the exact location of the finish line can’t be known in advance because currents on the river change with the wind.

“The Chaplin River is an anomaly,” she said. “You never know which way it’s going to go. It makes for an interesting day.”

Even though the actual turtle derby is Saturday evening, lots of other events will be taking place in downtown Perryville beginning Friday morning.

Starting at 10 a.m. on Friday and Saturday, vendor booths and food trucks will be open for business along the Chaplin River on Smith Street. Music, food and beer will be available both days.

Also both days, a kid’s corner with bouncy houses, a petting zoo and face painting will be located behind the First Christian Church.

Official Dockdogs competitions begin at 1:30 p.m. on Friday and 10 a.m. on Saturday, with several different classes and events, including distance jumping, extreme vertical jumping and speed retrieval. A local Dockdogs member is Taylor Bottom, a Perryville resident who works for the Boyle County Sheriff’s Office.

Friday at 7 p.m. in Baril Park along the Chaplin River, there will be a casual painting class featuring a Starry Night Studio instructor from the Community Arts Center leading artists in creating their own painting to take home of “Fireflies in a jar.” Cost is $35 and and you must pre-register by calling the MSP office at (859) 332-1862. The class is limited to 20 people.

From 7 to 10 p.m. Friday, there will be kayak racing on the river. Anyone who wants to race may bring their own kayak or there will be several available to use. Registration to race will be right before racing begins.

In conjunction with the Snappin’ Chaplin Turtle Derby, Main Street Perryville is also hosting a bourbon tasting with Mike Lankford, bourbon connoisseur, as he discusses the history of bourbon. This event will be held at 7 p.m. Thursday and Friday in the newly renovated Johnson-Britton House. Cost is $50 per person. For tickets call (859) 332-1862 or (859) 319-9762. All proceeds go to Perryville Main Street preservation.

At 5 p.m. Saturday, children are invited to dress in turtle costumes and bring their decorated wagons to march in a parade from the Karrick-Parks House on Buell Street through the festival.

And finally, at 7 p.m., the third annual Snappin Chaplin Turtle Derby begins and the bright green rubber turtles will be released so they can “race” to the finish line.