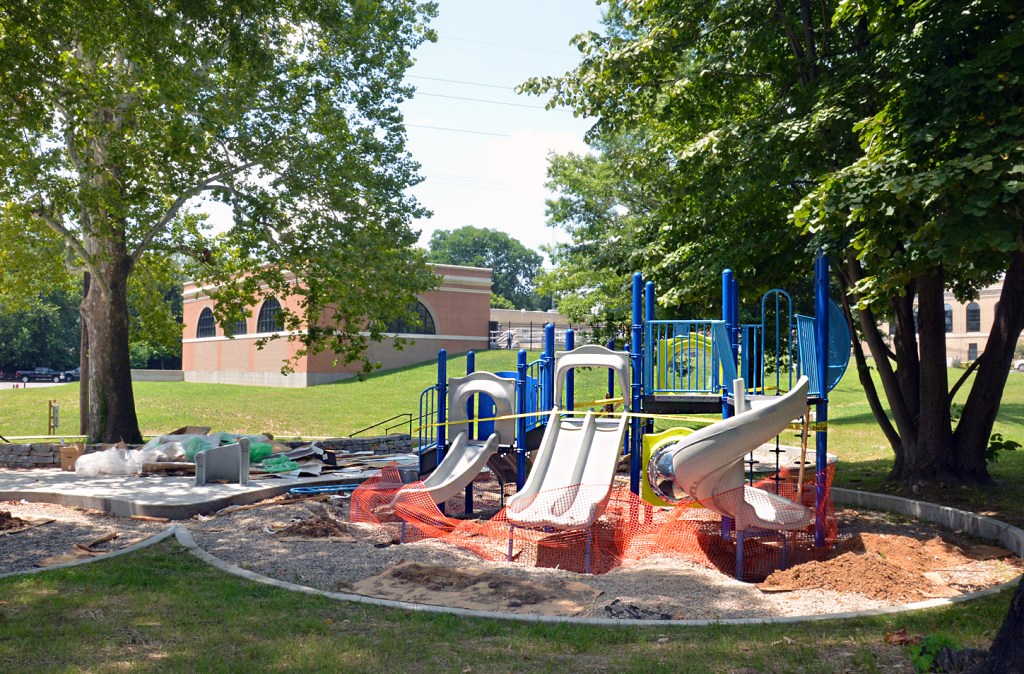 Robin Hart/robin.hart@amnews.com Thursday, workers continue to install the new playground equipment recently received to revamp the Lexington Avenue park, in front of the Danville Water Treatment Plant. Once complete, the park will be equipped with a rain garden and a water splash-pad.

Rebuilding of Danville’s Lexington Avenue park is not done yet, but work is continuing. After playground equipment is installed, workers will begin putting in a splash-pad area that the city commission recently gave the go-ahead to purchase.

On Monday, the commission approved spending up to $75,000 to purchase the equipment from Waterplay Solutions Corporation. The park is located at the recently renovated Coldiron-Watkins Memorial Water Treatment Plant.

“The playground equipment finally started to arrive last week,” said City Engineer Earl Coffey Monday night. “As it arrived, we began the installation of it and we’ll start back and work on the area that is wet now and get some fill materials so it will be converted into the rain garden.”

Coffey said the goal is to have the park accessible as soon as the playground equipment is fully intact.

The actual bid for all the pieces and part of the splash-pad came to a bit over $71,000, Coffey told the commission, but the final price may fluctuate by a few hundred dollars. “We suggest it’s rounded up to, but not to exceed, $75,000.”

Previously, Danville put up just under $47,000 in matching funds and sought a grant to pay for the rest of the park’s cost through the Kentucky Division of Water’s Source Water Protection Assistance Program. However, that state grant is currently on hold, Coffey explained later via email, and there’s indication that the program has been defunded by the state.

“The money staff has to spend on the education component is now diminished, but it won’t affect the current plans of the park, which is moving forward,” Coffey said.

The city already received $20,000 in a grant awarded from Kentucky Utilities, and the current costs of the park have already been allocated.

City Attorney Steven Dexter wanted to bring it to the commission’s attention that typically, “an expenditure of this type would require advertisement and bids, for sure. However, this is the first time the city has exercised this right under Kentucky Revised Statute that allows cooperative purchasing through other public agencies.”

The city is going through a platform called BuyBoard, a national online purchasing cooperative formed between the National School Boards Association and several state school board associations to streamline the buying process for schools, municipalities and other public entities.

Coffey said since this is the only splash-pad they are building in the community, it’s cheaper to buy in “little bitty pieces and parts, getting the power of your dollar.” He said it’s enabling the city to detail more efficiently and customize exactly what they want included in the splash area.

Commissioner Denise Terry said she’s been asked about some standing water in the area of the park. Coffey said that’s where the fill material will be included — gravel and sand — which will end up being the rain garden.

“It’s a little lower than the actual grade .. but the fill material will be designed to alleviate that,” Coffey said.

Danville previously decided to pay for the park work out of its general fund and from a grant it received, due to the educational nature of some of the park features.

The previous park was taken out during the city’s overhaul of the water plant. The new design includes educational spaces to teach visitors about the water cycle and how their actions can impact water quality. Officials have said the area will be used to host school field trips, and serve as the centerpiece of a larger water education focus, using signage throughout the growing trail system in Danville and Boyle County.

Coffey said the pad construction will begin as soon as the items to be embedded within the concrete arrive.

“We anticipate the contractor working on the rain garden area, prepping for planting, over the next two weeks, with plant installation coming shortly thereafter,” Coffey said.

The installation will be done by city staff and small contract work that is below the public bid requirements, he said.