Ben Kleppinger/ben.kleppinger@amnews.com Traffic moves along the Danville Bypass and exits onto Skywatch Drive Thursday, as other vehicles stack up, waiting for a light to let them onto the bypass.

If there’s anything Boyle County residents might be able to agree on, it’s that traffic outside Kroger is terrible. But local officials are talking with the state Transportation Cabinet about potential improvements — some are big, some are small. Changes for the roads that everyone loves to hate could be coming eventually.

An average of 23,477 vehicles travel the road every day.

Situated on the westbound side of this thoroughfare are Kroger, Starbucks, Liquor Barn, Applebee’s, Hobby Lobby, T.J. Maxx, Tractor Supply and many more establishments, each creating its own addition to traffic.

Dozens of homes in the Saddle Ridge development sit behind Applebee’s; their only way out is onto the bypass.

That all leads to congestion, frustration and sometimes even wrecks. 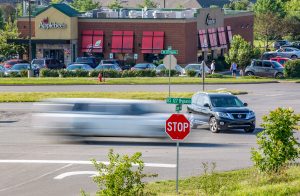 Ben Kleppinger/ben.kleppinger@amnews.com
An SUV waits in the median to complete a left turn onto the Danville Bypass from Belinda Boulevard Thursday afternoon.

“Since day one I’ve been here, I hear about Kroger, Kroger, Kroger, Starbucks, traffic,” said Steve Hunter, director of Danville-Boyle County Planning and Zoning, during a recent P&Z meeting. “And you know, three days before Christmas, we had a fatality out there at Belinda and the bypass … so it’s been on my mind pretty much every day, because I go out there and drink a lot of Starbucks coffee and go to Kroger and go to Applebee’s and whatnot.”

Danville Police Chief Tony Gray has seen more than his fair share of the chaos, particularly at the bypass intersection in front of the recently opened Starbucks.

“I live right there behind it. I watch it all the time,” he said. “It’s almost comical really, at times, just to watch it function. Because it’s not functioning right now very good.”

Downstream from that intersection, things aren’t comical at all — Gray said the intersection of Belinda Boulevard and the bypass by Applebee’s is “probably the biggest” concern in the area from a safety standpoint.

“Most of the accidents we have there are bad accidents,” he said. “I don’t think the numbers (of accidents) are very high, but when we do have them, they seem to be bad.”

Gray said there were two wrecks at that intersection in June. Usually, wrecks occur when someone is attempting to turn left out of Belinda onto the bypass. A rise in the middle of the four-lane bypass can make it tough to assess what traffic is coming the other way.

Wrecks on the bypass can require more police resources than wrecks elsewhere, the chief added. On a side street or in a less busy area, Danville might only need two officers to handle a wreck. On the bypass, it can take three or even four.

“We’ve only got five people (on duty) on a good day,” Gray said.

Hunter said some of the problems stem from how development was handled by P&Z in the past.

“It’s not fair to blame the city or the state for these issues,” he said. “Some of this was created right here on the floor of the planning commission.”

Hunter said no traffic studies were required when new development occurred, such as the Saddle Ridge neighborhood, Kroger’s gas pumps or Liquor Barn. “Access management” in the area was never looked at in “a regional fashion.”

The frontage road for the bypass — Skywatch Drive — is also a big problem; it shouldn’t have been built as close to the bypass as it was, Hunter said. Ideally, frontage roads should be at least 180 feet back from the main road, he explained.

“Part of the issue out there is the frontage road, the access roads, the relationship of the stacking spaces, the volume of traffic that each business is generating. And we need to take ownership of some of that,” Hunter said. “We did approve the Starbucks. We did approve the Applebee’s … At some point, we’ve got to look at all these access issues and predict what the outcomes (are) going to be.”

In order to move the needle on the traffic situation, Hunter, Gray and Danville City Engineer Earl Coffey recently sat down with Kentucky Transportation Cabinet officials to discuss their options.

Hunter said one of the first opportunities for improvement that could become a reality is the addition of a median down the center of the road leading from Liquor Barn to the bypass.

Such a median would split Skywatch Drive in two, and turn the three-way stop that’s adjacent to the bypass traffic light into a two-way stop. Traffic coming in from the bypass would have to travel back to Liquor Barn before turning left; Skywatch Drive traffic coming from the east side of the shopping center would be unable to turn left. 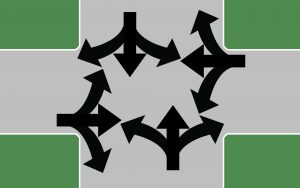 Graphics by Ben Kleppinger The current traffic flow at the intersection of Skywatch Drive next to the bypass in front of Starbucks allows vehicles to turn left or right or continue straight from any of the four directions.

Gray said he thinks the median would break up congestion and make transitions through the intersection much faster. And it could greatly improve the number of vehicles that are able to make it through the light at the bypass each cycle.

Coffey said he is working on a drawing of the intersection with the median that would be doable. The project is still tentative at this point, but he hopes to sit down and discuss the idea with City Manager Ron Scott, then potentially bring it to the Danville City Commission for consideration at its next meeting on Aug. 13.

Coffey said while some may believe the addition of Starbucks made the intersection worse, the curb around the coffee house actually added definition to the intersection that provided an “incremental improvement” to traffic flow. It’s possible adding a median would be another improvement on top of that, but it also might not be possible to know for sure until it’s done and the new traffic flow can be observed.

Something else local leaders asked the Transportation Cabinet for was a traffic light at Belinda Boulevard, the intersection where wrecks are a concern.

The state said there isn’t currently enough traffic to warrant a light there, Hunter said. But that led to another idea — building a connector road between Belinda Boulevard and Fox Harbor Drive, creating a new path to the bypass for the large residential area west of Hustonville Road. That neighborhood includes Fox Run Trail, Denmark Drive, Longview Road, Carrigan Drive and Cloverdale Drive.

Hunter said the state confirmed if Danville built the connector road, it would immediately generate enough traffic at the Belinda Boulevard/bypass intersection to warrant the addition of a traffic light.

That idea is further off from becoming a reality and would require approval from the state and guidance from city commissioners before it could move forward, Coffey said. 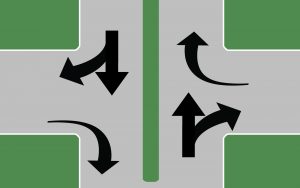 Graphics by Ben Kleppinger
a proposed median would limit traffic on Skywatch drive to right turns and traffic on the intersecting road to traveling straight or turning right.

“I believe that it will need their approval for us to spend the money necessary to make the more substantial improvements,” he said.

Coffey said it’s too early in the process to say with any certainty what kind of improvements will ultimately go forward and which ones will be nixed. But he does plan to bring the connector road idea to the city commission because “I think that’s a good idea.”

Gray likes the connector road idea, as well. That’s because if a light is put in at Belinda and the bypass, it could pull traffic away from the crowded intersection by Starbucks, he said.

A light at Belinda would also pave the way for a third idea — one Hunter and Gray both said they believe would really improve traffic efficiency in the area: doing away with the traffic light in front of Starbucks altogether and putting in a right-in, right-out only intersection.

Coffey warned against thinking any of the ideas discussed by local officials and the state are a done deal. There are still plenty of hurdles — and plenty of other ideas that might be better. But it’s definitely a goal of a lot of people to improve the traffic flow all along Danville’s busy bypass. 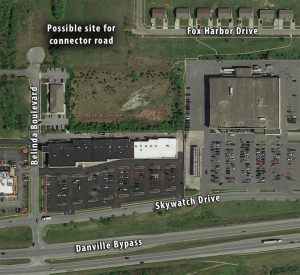 “Improvements on this corridor — from (Gose Pike in the east) to the railroad (crossing in the west) — they’re on our minds and the Transportation Cabinet’s minds regularly,” Coffey said. “And it’s necessary. Our thought on it is necessary.”

Coffey said you can never predict how the environment will change in the future, what new development might completely change the needs for traffic control. As a result, “things are never permanently fixed.”

“They change, and then they’ll change again,” he said. “… Anything you try to do, you’ve got to consider that.”