Michael Hughes reflects on “the soul of Second Street” 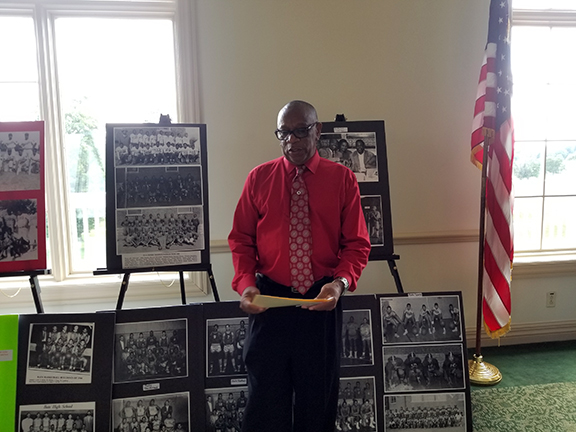 The Danville-Boyle County African American Historical Society (DBCAAHS), the Boyle County Public Library and the Heart of Danville Main Street program have joined together to bring the fourth annual Soul of Second Street Festival to Danville on Aug. 3 and 4. Michael Hughes, president of DBCAAHS, came to Rotary on July 27 to share his thoughts about the festival and his memories of growing up in the area.

Hughes has lived in Danville all of his life and has been a leader in the development of the Soul of Second Street Festival and mini-conference, as well as the establishment of the African-American Historical Society in Boyle County.

In January of 2018, Michael Hughes was named Arts Citizen of the Year by the Arts Commission of Danville/Boyle County. He accepted the recognition at the McKinney Center in Constitution Square. Family and friends were on hand to witness the honor. Hughes thanked the many people he said had supported and inspired him over the years.

DBCAAHS was organized in December 2013 to preserve the history of the African-American communities in Danville and surrounding areas of Boyle County. There have been three previous Soul of Second Street festivals. The festival showcases the music and food typical of the former African-American business district and also relates the history of the district with photo displays and story circles.

“It’s important to me that the kids and people of our community know just how grand of a thing Second Street actually was,” Hughes said.

Hughes remembers, as a child, watching, wide-eyed, all the bustling activity along Second Street. “There were a lot people going into one building where there was a lodge on the top floor,” Hughes said. “A door would open and you could hear a jukebox playing. And there were white people pulling up on the street, probably buying booze from bootleggers.”

He didn’t realize at the time that he was witnessing the heyday of Danville’s black business district.

When he returned from Vietnam in 1970, change was evident. Within three years, the buildings that so many people remembered fondly were razed and replaced with Constitution Square Park. The Urban Renewal Program came through Danville in 1973, and much of the city’s black business district that had stood for 100 years was demolished. Gone were the black-owned barbershops, poolrooms, restaurants, hotels, doctor and dentist offices, and social and entertainment magnets that had thrived during segregation but had fallen on hard times when integration allowed blacks to spend their money elsewhere. When the money left, businesses failed. When businesses failed, repairs were hit-and-miss.  It was the beginning of the end of the Second Street Hughes remembers.

“Second Street had always been part of conversations at black family reunions, but it was never part of the larger community conversation,” says Hughes.  He thinks the work of many groups to document and promote the history of the former black business district helps everyone in the community to better appreciate the many contributions made by members of the black community.

This year’s festival celebrates our community diversity while celebrating the once vibrant African-American business district that stood on Second Street through great music, food, drinks, and history.