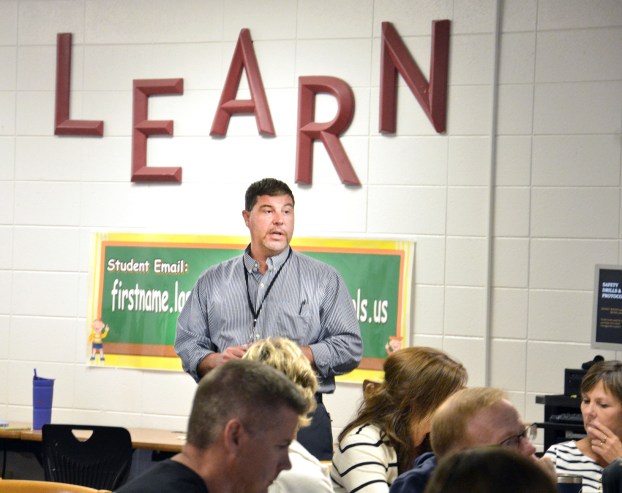 According to a training coordinator with a state school safety agency, Boyle County is far ahead of the curve when it comes to having a plan on how to deal with an active shooter.

Monday afternoon, teachers at Boyle County Middle School participated in the Run, Hide, Fight training, taught by Dan Orman. He’s with the Kentucky Center for School Safety in Frankfort, and said that staff and administration of Boyle County schools “are so far ahead of the curve” when it comes to preparing for school safety, especially involving an active shooter.

“The cool thing about Boyle County is they have a plan, and they keep plugging away” to make sure their plan and safety precautions are as solid as possible, Orman said.

The KCSS wants teachers to be able to teach in a safe environment, and for students to learn in a safe place, he added.

Orman said one of the things teachers should stress to their students is never fight with an armed intruder. “Don’t teach kids to fight — ever.”

He gave an example concerning a school incident in 1994 where an armed student took a teacher and class hostage. The assistant principal intervened and traded himself for the students and teacher. Then he got the gun from the student.

Orman then asked the Boyle County staff to imagine what might have happened if a boy had reached into a food collection box in the back of the room and hurled a can of peaches at the gunman. If he had been provoked by getting hit with the can, or a rock, there might have been 11 people killed in that classroom, Orman said.

Later in the afternoon, Assistant Superintendent Chris Holderman gave a brief explanation of what the school district’s safety strategic plan will look like if the board of education approves it.

Holderman said he was excited about the momentum of the plan, but not happy that they have to have one in place. He said chances are “very slim” that a gunman would invade the school. “The problem is —  is it can happen,” Holderman said. “We are living in a different world today.”

He said the board has had nearly a month to look over the plan and they may approve it at their next meeting, or they could make alterations.

Once the board approves the plan, the safety changes will become school policy. Everyone will have to abide by the changes, Holderman said.

Lockdown drills will happen four times a year instead of the state-required twice a year. He said teachers should be ready to have drills “during the messy times,” like during class changes and lunch times.

“This is something we have got to do,” Holderman said.

Another change will be mandatory visitor monitoring, he said. When a visitor comes to any of the county schools, they will have to show their driver’s license and a quick background check will be done immediately. They would then be given a “high-tech” badge to wear until they leave the facility.

Holderman said the proposed plan also updates and replaces bus monitoring cameras as necessary and creates assigned seating on all the buses. This is because several students have stated they don’t feel safe on the buses, he said.

“This is how we have to up our game. This is what it’s coming to,” Holderman said. “It puts a little more meat on the bone and a little more power.”

Boyle County High School will be the site of a mock active shooter exercise 7:30 a.m.-noon  Friday led by the Danville-Boyle County Emergency Management Agency. It will be a full-scale exercise to test the responsiveness of local emergency agencies during an active shooter scenario. The scenario will simulate the school’s regular morning arrival routine and volunteers will be assigned to a variety of roles. The mandatory planning meeting for all volunteers involved will be 6:30-7:30 p.m. today at Boyle County High School.

Hogsett renovation cost goes up by $1.5M, Part of a trend: Construction prices skyrocketing around the state