All’s Fair in Love and Opera at Pioneer Playhouse! 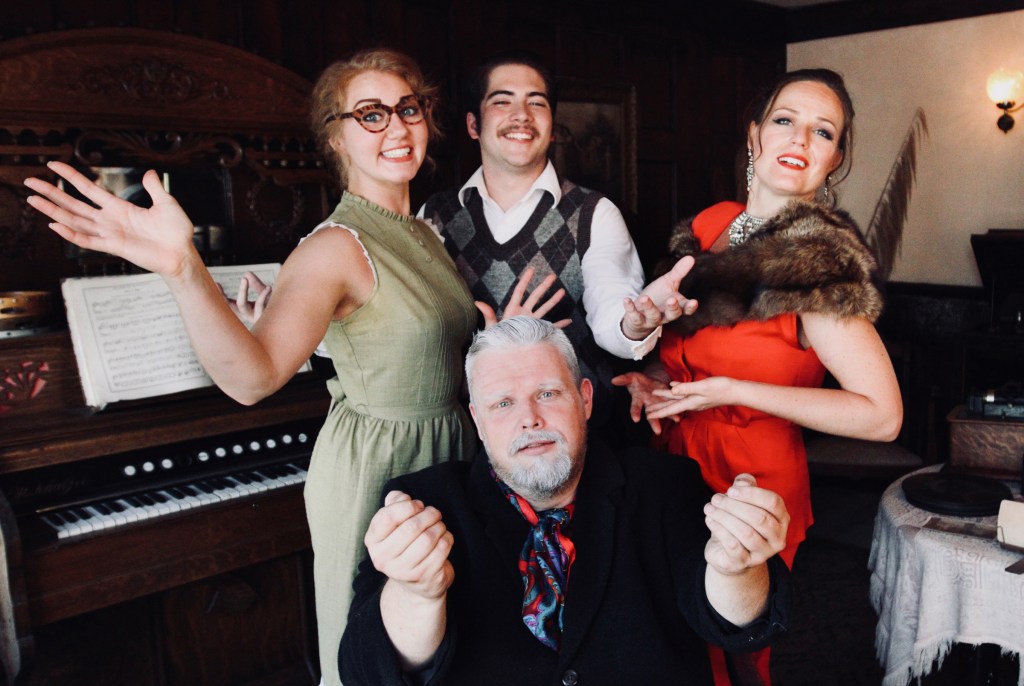 Pioneer Playhouse will finish out its regular 2018 play season with “Living on Love,” a romantic comedy written by Joe DiPietro, based on the play “Peccadillo” by Garson Kanin.

The story revolves around two larger-than-life characters, a demanding opera diva slightly past her prime, and her explosive maestro husband. Complications in the relationship arise when the diva, played by Playhouse favorite Erika Lee Sengstack, discovers that the maestro, played by “Drinking Habits” director Eric Seale, has become enamored with the lovely young lady hired to ghostwrite his largely fictional autobiography. 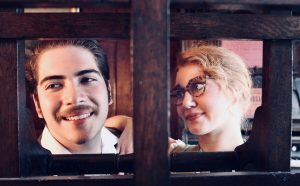 Robert (Giancarlo Herrera) and Iris (Fannie LeMasters) were hired as ghostwriters for a famous couple, and may have found love where they least expected it. 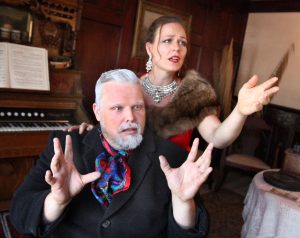 The Diva (Erika Sengstack) and the Maestro (Eric Seale) have been making beautiful music together a long time.

The diva decides to hire a handsome young scribe of her own to pen her memoirs. Inevitably, sparks fly, silverware is thrown and romance blossoms in the most unexpected ways.

“My mother is the one who discovered this play, and really fell in love with,” says Heather Henson, managing director of Pioneer Playhouse, speaking of Charlotte Henson, wife to founder Col. Eben C. Henson. She has been the producer of the historic theatre since Eben’s death in 2004.

“Mom is truly the backbone of the theatre. She, my brother, Robby Henson, and I, all read various plays throughout the year and eventually hone in on five to fill out a season.”

“Living on Love” is a new version of an older play, and it was recently performed on Broadway, starring renowned opera singe, Renee Fleming as the diva.

Living on Love is directed by Anthony Haigh, who recently retired as director of the theatre program at Centre College after many years, and who continues to act and direct professionally throughout the country.

“We’re always thrilled when Tony is able to work with us at the Playhouse,” says Henson. “Tony has both acted and directed for us, and his shows are always brilliant productions. He’s one of those directors who can pull a complicated play together in ten days — a skill not every director possesses. We know a show directed by Tony will be completely ready on opening night with a terrific set, gorgeous costumes, perfect music and, of course, top-notch work from the actors themselves.”

Q: You’ve directed at Pioneer Playhouse for a few years now. What do you like about it?

TH:  I love working at Pioneer Playhouse because it offers the experience of a form of working that is no longer universally practiced – two-weekly rep.  Young theatre professionals get to work with grizzled veterans like myself in this grueling system.  It teaches them how to learn one play, rehearse another, while performing a third. All at the same time. There’s so much to learn during a summer at Pioneer, and I get to work with these eager young artists.  That’s so refreshing. 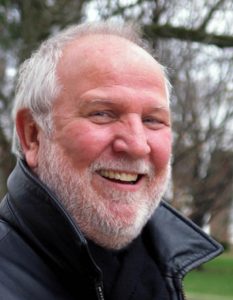 Living on Love is directed by Anthony Haigh. Trained in England, Tony has been acting and directing professionally for over fifty years. With 60 or more directing credits, he’s worked in film, radio, television and theatre and recently retired from teaching theatre at Centre College. He is also the founding director of Scarlet Cup Theatre – a site-specific theatre based in Danville. In 2013 he was made a Fellow of the Rose Bruford College of Theatre and Performance in London.

TH: “Living on Love” is a particularly fun play — both for audiences and actors.  It references one of the earliest forms of comedy, “Commedia Del’Arte,” and in this case pairs it with another, particularly Italian form — classical opera.  I’m sure audiences will love it.”