Coloring outside the lines: After forming a connection across continents, Mercer artist invests in South African women’s bead art 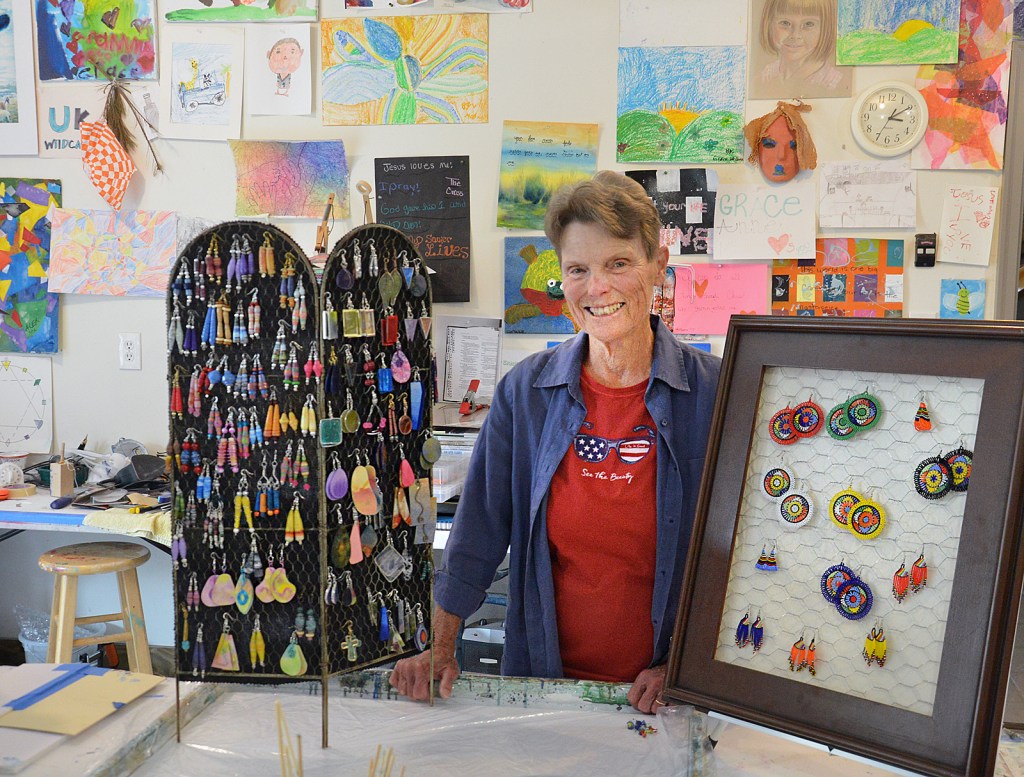 Photos by Robin Hart/robin.hart@amnews.com Jacquie Woodward, of Mercer County, has entered into a business agreement with a South African woman she has become friends after talking on a blog about their "health battles." Woodward purchases hand-crafted glass-beaded jewelry and intends to sell them in the U.S. At left is Woodward, and her granddaughter, Grace McDaniel, earring collection for sell, and at right are earrings made by Dlalie in South Africa.

A unique bond between two women of different races, from opposite economic backgrounds and generations apart, who are living on distant continents has spurred a business venture in central Kentucky.

The business agreement is between Jacquie Woodward of Mercer County and her friend, Dlalie, who lives with her mother Thandi in Johannesburg, South Africa.

Woodward said the two women met about five years ago on an internet blog site that she maintains. After fighting her own bouts with cancer, Woodward, who is now in her mid 70s, created the blog Real Health Hope — at realhealthhope.com — as a way to find healing for herself by helping counsel others who were fighting their own “health battles.” 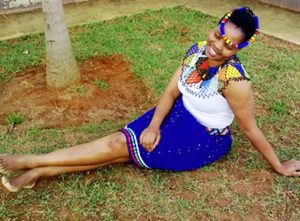 Photo submitted
Dlalie, of South Africa, is wearing a few of the pieces of jewelry she and her mother, Thandi, weave in South Africa.

Dlalie is only in her 20s, Woodward said, and five years ago she was in a very dark place due to “significant pain of very many kinds in her life. … She was desperate.” Dlalie discovered Woodward’s blog and when they found out they were both devout Christians, Woodward said they developed a strong relationship.

“She popped up in my life many times since then,” Woodward said.

Woodward knew Dlalie, and her mother Thandi, who is in her 60s, support themselves by making colorful glass beaded bracelets, necklaces, earrings and scarves and selling them in an open-air market in Johannesburg all year round. It’s winter in South Africa now, which means less business in the market, Woodward said.

Woodward is a talented artist who usually immerses herself into her paintings, some of which resemble intense and subtle colors and shapes that seem to free-flow on a canvas, allowing the viewer to speculate what the painting represents. Sometimes the smaller works of art are just to admire for the rich colors and patterns.

“I paint pictures. Some work and some don’t. I sell some and I donate some,” Woodward said.

But recently, “Wearable art began to intrigue me.”

She and her granddaughter, Grace McDaniel, an upcoming senior at Boyle County High School, have been working together creating an inventory of their own artistic jewelry to sell using watercolor papers, silver and copper wire and colorful paper beads they roll by hand.

Large, uniquely-shaped earrings and long necklaces made with paper beads are striking, not only because of their shapes and colors, but also because of their lightweightness. She and Grace are also learning and experimenting with coiling and twisting wire and beads to create jewelry.

The work together was “mostly an excuse to spend time together,” Woodward said.

Woodward admitted she doesn’t usually wear much jewelry. But once she started on her own jewelry project with Grace, Woodward became more concerned about how her friend, more than 8,000 miles away, was able to make a living.

In email photos, Woodward was drawn to the intricate geometrical designs that Dlalie and Thandi were crafting with tiny glass beads. She immediately thought about a possible business relationship — one that could help the South African women stay independent and financially secure and allow her to spread their art to people in this part of the world.

“They can’t take any risk,” Woodward said. “I had the advantage living here. I’m going to eat tomorrow. They’re totally dependent on their business to eat.”

During Dlalie’s busy summer months, she sometimes hires a few widows who are also excellent beadworkers, Woodward said. But right now is their slower season, so it was a good time for them “to really step out in faith to do this.”

A few weeks ago, Woodward and Dlalie agreed upon what of pieces Woodward wanted to purchase in order to resell in the U.S. She then wired the payment and shipping costs to Johannesburg, but Dlalie had already shipped the merchandise to the U.S. before the money transaction had taken place.

Because they have been friends for so long, Woodward and Dlalie have a mutual trust and respect for each other, so neither one of them ever considered it a bad deal.

“This is extremely high quality work,” she said. “They’re going to send their best.”

Woodward said she believes the two women don’t make enough money “to any great degree of prosperity … and they’re frugal.”

She said with her purchase of some of their inventory, Woodward hopes to sell enough here to continue buying their hand-crafted jewelry, “so they are able to have a more stable income.” She also hopes eventually Dlalie will be able to hire one or two widows full-time, which would help those women be a bit more financially secure.

This is Woodward’s first investment into Dlalie’s African beadwork. She will be “testing this market” when she offers the pieces for sale at the upcoming Pioneer Days, Aug. 17-19, and the Fort Harrod Jazz Festival, Sept. 14-16.

“I think it’s kind of a privilege to wear one of their pieces.” Woodward said when someone wears a piece of their jewelry they may think, “There’s a little family in South Africa who made this for me. And I care about them.”

Comparing Dlalie’s jewelry to her own unique colorful bracelets and necklaces, Woodward said they are both artistic. “Color, form, composition, lines — it has everything a painting has if you stop and think about it.”

Watercolor paper bracelets wrapped in silver wire and coated with acryilic are some of the jewelry that Woodward and her granddaughter, Grace McDaniel, are creating. The South African glass beaded bracelets that she’s selling for her friend Dlalie are in the background.

Glass beaded bracelets woven in South Africa are among the items Woodward has recieved.