Buying and selling ‘is an addiction’: Business partners enjoy hobby year round 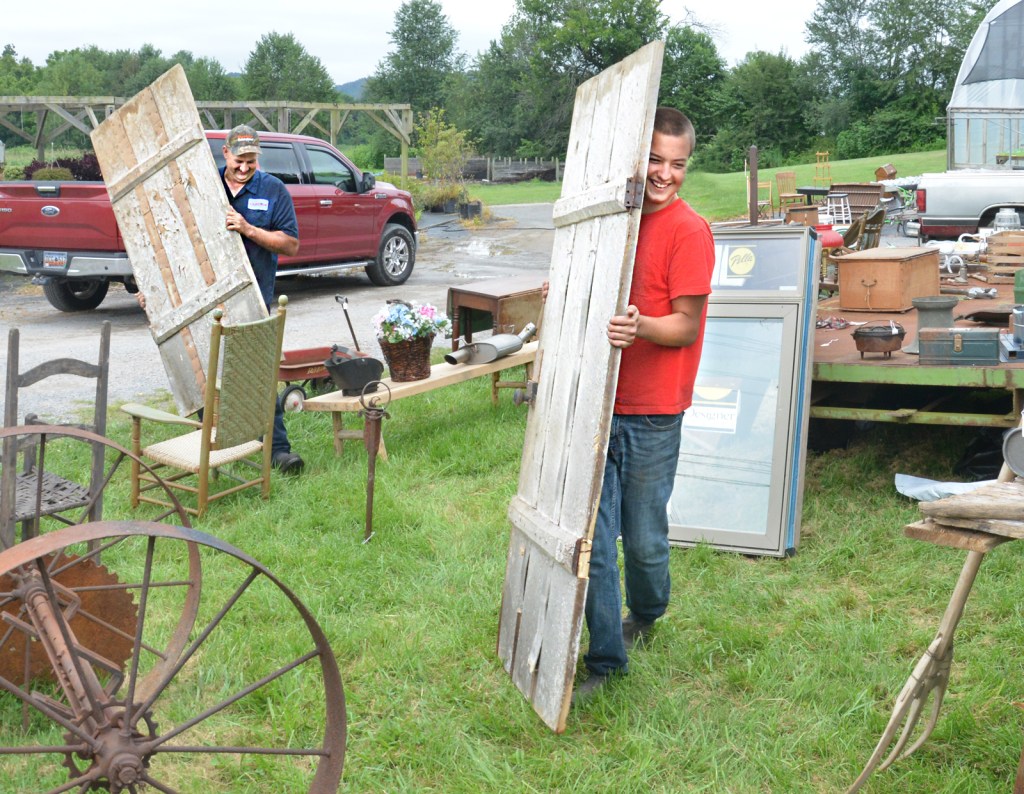 The annual U.S. 127 Yard Sale is this weekend and that means Neal Spears and his young business partner, Trevor Davis, are open for business. This year, they’re set up in Lincoln County, practically right in the middle of the 690-mile long route. 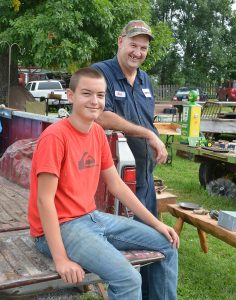 Spears is 59, lives in Hustonville and works at a sawmill in Dunnville. He learned how to hunt for, buy and sell antiques and “stuff” from his dad, George Spears, when he was a boy growing up on a farm in Moreland.

Spears said he started “about his age,” pointing to Davis, who is 14. He chuckled when he talked about his dad’s hobby from years ago.

“Dad did it all his life,” Spears said. “My mom put up with dad and all his stuff … It was sort of an addiction.”

Sometimes his dad would sell things on the Stanford radio station, which broadcasts a call-in show for people to sell and trade items. He said people would also just stop by their farmhouse to see what he had for sale. 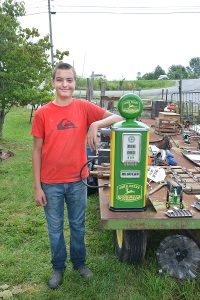 Standing proudly next to a miniature John Deere gas pump he had for sale, Davis said the green and yellow John Deere items are his favorite things to buy at local auctions and estate sales.

Spears likes buying “primitive pieces” and collects cast iron cookware. He has about 75 pieces hanging on the walls of a storage building near his home. The ones he has at the 127 Yard Sale are just extras he doesn’t mind to part with.

Before Spears will buy anything to keep or resell, “It has to be true blue old stuff.”

“Reproductions have ruined everything,” he said.

The unlikely partnership began about four years ago when Spears started working at the mill with Davis’ father. Once they met, Davis became intrigued with Spears’ business and hobby of antiquing.

Sitting on the tailgate of an old pickup truck they use for hauling their finds, Davis said, “Once you start doing it, there ain’t no going back.”

Spears agreed: “It’s a buy’n disease. It’s an addiction. A disease there ain’t no cure for.”

Spears has one grown son who was never was interested in the hobby. “He hates it,” Spears said. 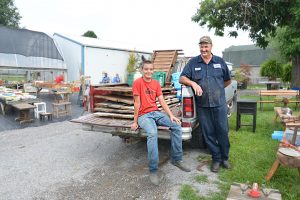 Robin Hart/robin.hart@amnews.com
Neal Spears, right, and Trevor Davis are among thousands of vendors participating in the U.S. 127 Yard Sale this weekend.

Looking at the young man standing beside him, Spears said, “He’s like an adopted son.”

Davis grinned, looked up at Spears and said, “He like a second dad. I even call him Dad.”

During the school year, Davis spends nearly every weekend with Spears. They go to local auctions, estates sales and yard sales looking for bargains and special finds that interest them. They collect items all winter just to sell one time a year — during the annual U.S. 127 Yard Sale. Spears had been doing this for a long time before he ever met Davis, but now he has a sidekick.

In the summer months, when Davis isn’t attending Russell County Middle School, he spends every day with Spears.

He said there wasn’t anything to do at home in the summer except cut grass, and neither of his parents minded him hanging out with Spears.

As more people started milling around the items for sale, Spears and Davis continued unloading the pickup truck. Once they set up old wooden doors, Spears went back to talking with his friends and customers. “Found anything today?” he asked one friend. 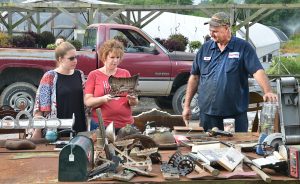 Cheyenne Brock, left, and Deniece Cummins, both of Crab Orchard, ponder the usefulness of a cast iron covered wagon as Neal Spears suggests to make it a bookend. Neal’s booth is at Indian Camp Nursery on U.S. 127 in Lincoln County.

When a woman picked up a heavy cast iron piece in the shape of a covered wagon, he said, “That would make a good bookend!”

Davis took out a notebook and price tags and began tying them on Spears’ stuff — a magazine rack and an old Radio Flyer red wagon. “How much for the wagon?” Davis called to Spears.

When there was a lull in business, Spears said he and Davis work together but have separate merchandise and set their own prices.

“One day we might have a little antique store,” Davis said hopefully.

Spears answered, “Yeah, we might have a little store, one day.”