STANFORD — A Lincoln County man was arrested Friday morning after he was allegedly seen running naked on the railroad tracks near Ky. 2141 and Vonlinger Lane.

Randy Beghtol, 53, a resident on Ky. 2141, was arrested and taken to the Lincoln County Regional Jail. 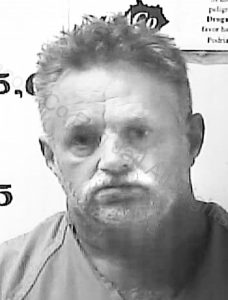 Lincoln County Sheriff Curt Folger said he had received at least four calls from individuals and many more from railroad employees and passersby who have reported seeing a man streaking on the tracks for the past several weeks. Friday morning, he got another call from the railroad and when he arrived at the scene, two women flagged him down and reported seeing the same naked man on the tracks.

Folger said when he located Beghtol standing on the tracks, the only thing he was wearing was a pair of flip flops.

Beghtol jumped off the tracks and ran when he saw Folger. The sheriff soon located Beghtol about 50 yards away in a creek area.

Beghtol told Folger that he needed help, “but he knew right from wrong,” Folger said.

Folger said he didn’t suspect Beghtol was under the influence of drugs or alcohol.