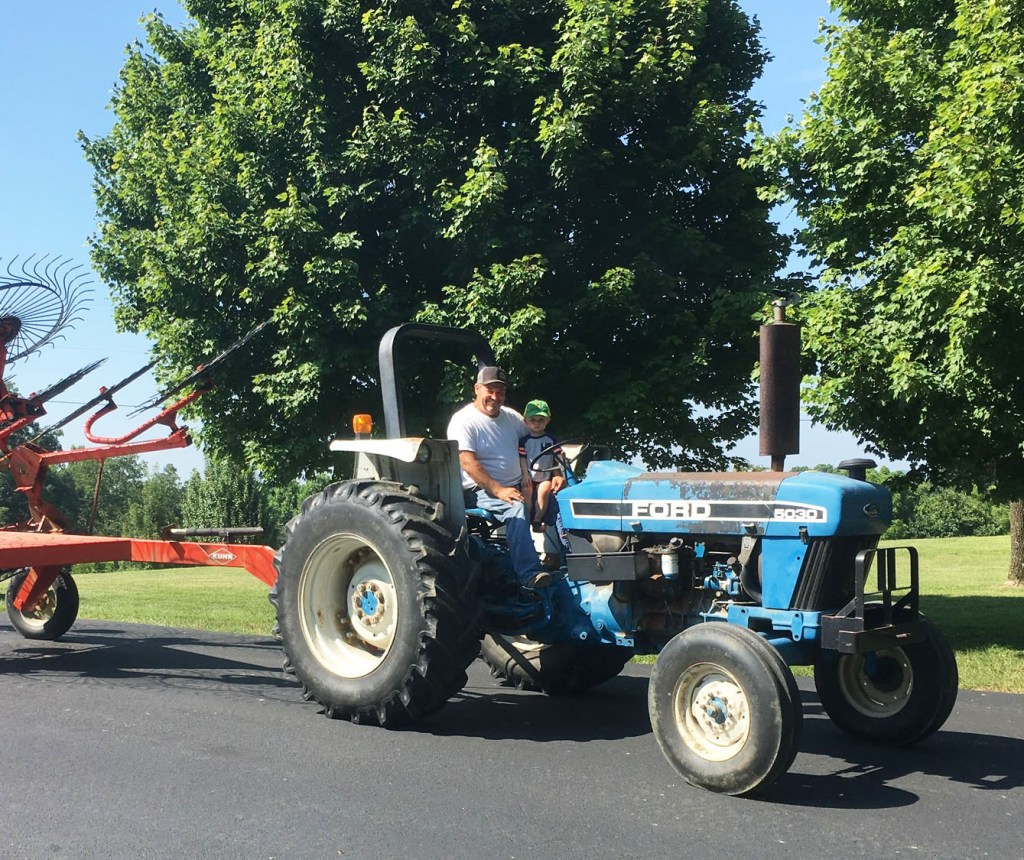 Photo contributed Tim Goodlett works on his Casey County farm with his grandson, Jackson Carter Allen. Although the pressure on farmers resulting from tariffs against China will be tough to get through, Goodlett thinks it will be better for them in the long run.

Tariffs being imposed by the Trump administration focus mainly on $200 billion worth of products from China, and China’s retaliation against America is greatly affecting the commodity price of soybeans. But other farmers are also preparing for tough times ahead because of the trade war, as well.

Tim Goodlett, a beef cattle farmer in Casey County, says the tariffs won’t directly affect him, but the effects will trickle down, eventually.

“Indirectly, with the price of commodities — and I’m talking about all different kinds of agricultural products produced — the price is all based on supply and demand …” Goodlett said.

Goodlett got back into farming after retiring as a principal; he is the fifth generation of his family to farm.

“When the market becomes really slow due to the tariffs and trade issues, then that product just sits still. Right now, you’re fixing to put 2018’s crop in storage, but no one will be able to pay,” he said. “Or the farmer will get a whole lot less for that crop. Someone’s got to eat that storage bill, so it’s passed on back down to the farmer.”

Goodlett said farming operates differently than other types of manufacturing — it can’t be as responsive to demand.

“… you can’t really prepare. We just have to wait and see,” he said. “… In manufacturing, if they’re making 100 cars and the market slows, they just stop making them, and therefore, those products gradually filter through.”

Goodlett has been president of the Casey County Farm Bureau for the last four years. He says the best thing farmers can do right now is get involved with their local commodities support group, such as the Kentucky Cattlemen’s Association, which lobbies with the national association to help the overall industry.

“The Kentucky Farm Bureau and the American Farm Bureau, they all work hand-in-hand to help all farm commodities,” he says. “They work with our elected officials in D.C. to help look for and expand our market share.”

The U.S. has run a negative trade balance for nearly 50 years, he says, sourcing facts on the AFB’s website, and it has been exceeding hundreds of billions of dollars. In his opinion, what the tariffs will force the country’s leaders to do is look for new markets. “We’re going to have to revisit and rewrite the trade contract. It will be hard on local farmers to deal with the current issues (caused by the tariffs), but in the long haul, it will make it a better market area. It’ll force them to look for more markets, more countries to trade with.”

It’s a unique industry — farmers feed the world, he says.

“We run a year behind, so to speak. Not the perishable items, but row crops — your grains, your soy, your wheat. The ‘17 crop is what’s being shipped now, so they’ve already got their money for that. So the grain traders who were expecting to fill exports can’t do it now, and if that guy goes under, he can’t buy next year’s ‘18 crop, and nobody’s going to eat. And someone’s got to eat that storage bill; it’s passed on back down to the farmer.”

However, most people only think about the end result — the price-effect on consumers, he says. If long-term effects persist and there’s no wheat for bread or flour, the end result is the price of those goods will skyrocket.

As far as the emergency aid for farmers proposed by the Trump administration, Goodlett says with what little he knows about it, he expects it will assist the farmer that is caught as a result of the trade issues, to help pay for or purchase some of that crop or commodity that otherwise would be wasted.

Goodlett raises about 50 head of his own cattle, but also works with another, larger operation. So far, all he’s been able to find specifically about the aid package is farmers will need to go to their local farm service office, maybe sometime in early September, to sign up for it.

“That’s why I tell people to get involved with the (Kentucky) Farm Bureau’s federation side. They work hard to get involved with legislative issues to protect the farmer, to make certain that no laws are written …that would be detrimental to the ag industry,” he says. “And they’re not just about one commodity. People really wouldn’t think about ethanol being an ag product, but it is due to grain. Bourbon, timber, all the same way.”

What does the future look like for farmers dealing with the fallout of the tariffs?

“Honestly, you’re asking me a question I know almost nothing about, in terms of trade and what President Trump is trying to accomplish,” says Craig Cox with Environmental Working Group, an advocacy organization based in D.C. that tracks farmer payments. Cox is senior VP for agriculture and natural resources.

He will say that the decline in commodities caused by the tariffs may also cause a decline in other farm subsidy programs already on the books. He says there are three major subsidy programs, all three of which trigger payments to producers as prices decline: the federal crop insurance, agricultural risk and price loss coverage programs.

“The one caveat is for the federal crop insurance program and the ag risk coverage, over time those programs will adjust to lower prices, so the revenue guarantee that farmers have will decline.”

So, he says farmers have a legitimate concern that if these prices stay low for the long-term, the amount of protection they get will also decline. And who knows what congress will do with the current farm bill, Cox says …

“The other issue with what the administration is proposing to do — there’s no details yet on how they’ll calculate these additional payments, and that issue concerns us a lot.”

Cox went through several tables outlining which farming operations in Kentucky have benefitted from the subsidy programs. “What really worries us is the majority of these go to the largest and often most financially secure operations.”

Cox says that worries Environmental Working Group for two reasons: “No. 1, are these taxpayer payments going to the family farmers who really need help, the farms that are really suffering the most? Or are they just getting a small amount of the subsidies, not enough to really help them?”

Cox says the second issue follows from that: If the subsidies do benefit larger farms more, is the federal government putting its thumb on the scale by giving these larger operations a leg-up over the smaller farmers?

To further complicate things, the organization also tracks what they refer to as “city slickers” and other wealthy Americans who live in cities and coastal communities, yet collect subsidies meant for farmers.

Due to complex loopholes and partnerships, “You don’t really have to be getting your hands dirty to get these payments — kind of the clearest indication that maybe the people who need this help are not the ones getting it,” Cox says.

“Most people are surprised by this. You’d think it would be different, but it’s not,” Cox says. “We could be doing so much more for family farmers … We need fundamental reform.”

To find out more about what farms in Kentucky receive the highest amount in subsidies and national farming statistics, visit ewg.org.