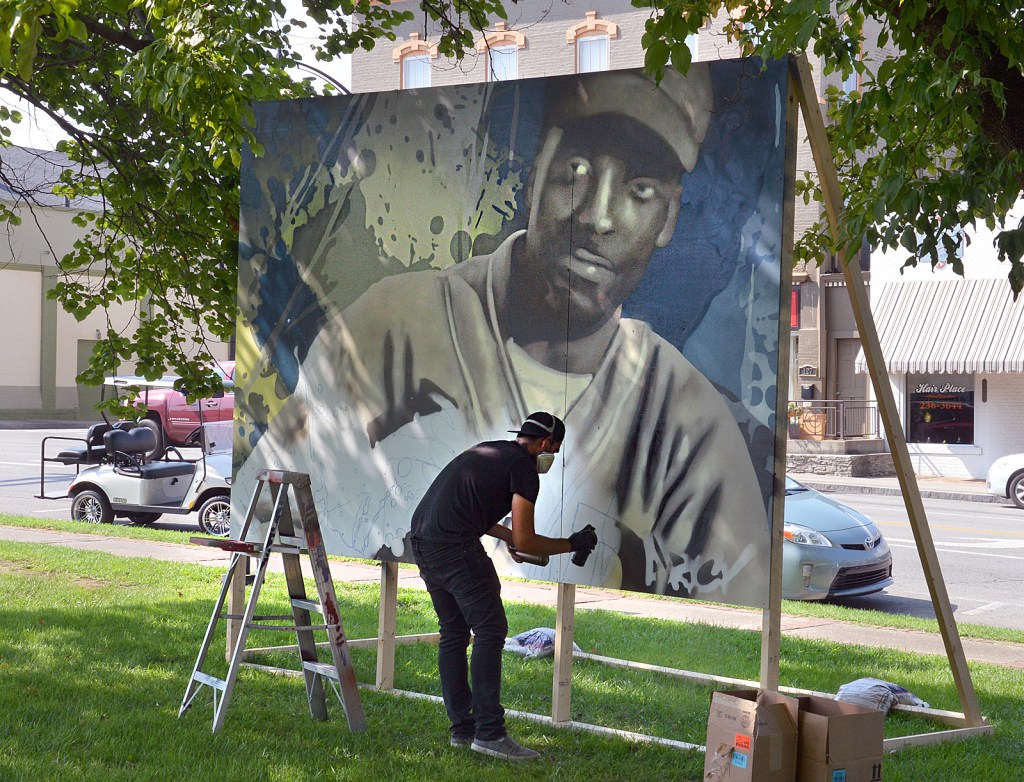 Ryan “ARCY” Christenson of Connecticut painted the likeness of a young William E. “Bunny” Davis — wearing his baseball uniform and holding a bat — Saturday afternoon during the Soul of Second Street Festival. ARCY’s canvas was actually an 8-by-12-foot wooden panel attached to a large frame located in Constitution Square Park near Main Street.

Using only cans of spray paint, ARCY began creating the artwork at about 1:45 p.m. and was finished around 6 p.m.

Under the shade trees where he was working, ARCY pulled off his paint respirator and talked with anyone who had questions about his style of painting. If they asked who the subject was, they were told they’d just have to wait and see. It was a secret.

Late in the afternoon more people began to gather around the painting and many began guessing who it was.

Jamie Gay walked up, pulled out the stick of candy he was sucking on and grinned, “That’s Bunny!” Then he began taking pictures.

“You got him,” exclaimed Tish Walker. “That’s him. You’re going to make me cry.” 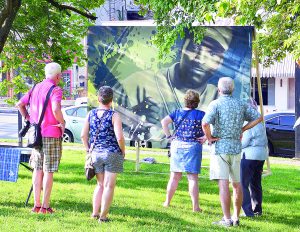 After ARCY finished his portrait of a young William E. “Bunny” Davis on Saturday, several Soul of Second Street festival goers stand to admire the mural. ARCY based his mural on an old photo of Davis wearing a baseball uniform and holding a bat.

ARCY said, “That’s what I love. I want to hear all of their stories” about the man he was painting.

Bunny Davis was a man ARCY had never heard about. But like all of the people he paints portraits of, he did a lot of research about him.

“I had to research and find out what was culturally significant,” ARCY said.

According to he Notable Kentucky African Americans Database online, William E. “Bunny” Davis was born in Perryville in 1917 and he played football, baseball and basketball at Bate High School in Danville. “He was an all-state forward in basketball and selected to play on the All-American Negro High School basketball team of 1936. It is thought that Davis was the first African-American basketball player to be named an All-American. Davis could run the 100-yard dash in 9.7 seconds. He played semi-pro baseball prior to integration: in 1947, he joined the Lexington Hustlers, the first integrated baseball team in the South. Davis was the first African-American to umpire baseball in state high school tournaments and for Kentucky in the Southeastern Conference. He was also the chief doorkeeper for the Kentucky House of Representatives.”

But on Saturday, when people stopped to watch ARCY paint, they began to talk about Davis and how he influenced their own lives. Hearing these conversations, ARCY said he understands more of the man’s legacy. “I’m taking it all in.”

ARCY said he wants to know “as much content as I can get about the public figures” he paints.

Tish Walker shared many memories with ARCY of her working for Davis when he owned a moving company in Danville.

“Always smile. Never let them see you sweat,” is what Davis always told Walker when she worked for him while she was attending Danville High School in the late 1970s.

Every summer, he hired the same “four little black girls,” she recalled. “He called us Bunny’s Angels.”

“He influenced a way lot of kids,” Walker said. If you worked for him, “you had to go to church and make good grades.” And he paid very well, she said.

“He was such a good man. We need a whole lot of Mr. Bunnys,” Walker said. “A whole lot of people benefited from his kindness.”

ARCY said painting large wall murals is easier than the ones he does on the 8-by-12-foot panels around the country, like the one he did in Danville Saturday.

He said details are more difficult when using cans of spray paint. Painting Bunny Davis was even more challenging, ARCY said, because the mural called for Davis’ face to be only a fraction of the mural. Usually, the faces ARCY paints take up the entire space so it’s easier to add a lot of detail, ARCY said.

“One-half inch lines at the thinnest” is all he can get using spray paint, and thin lines is what adds detail sharpness of the face.

He said he doesn’t use special cans of spray paint, just a good quality paint.

Information on where ARCY’s mural will be placed was not immediately available.

Ryan “ARCY” Christenson, of Connecticut, paints a detail on his mural Saturday.

Adrienne Letcher, of Danville, talks to someone about the photo display she looking at during the Soul of Second Street Festival Saturday at Constitution Square Park.