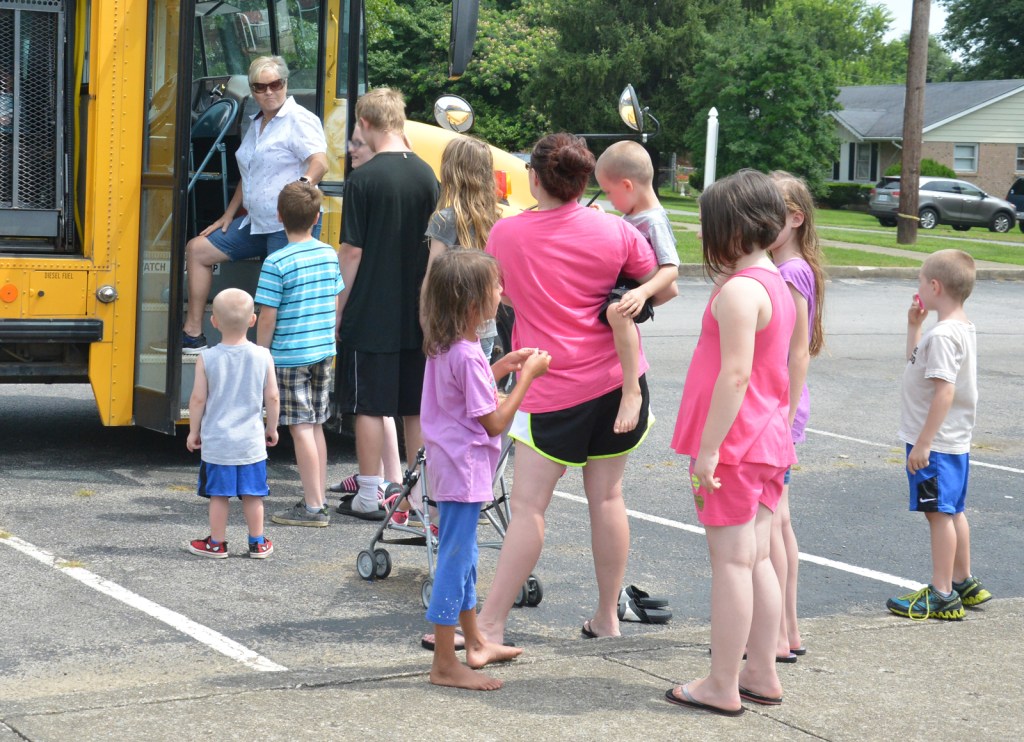 After 29 years of helping to make sure Danville students had nutritious meals at school, Patty Taylor is retiring this month. 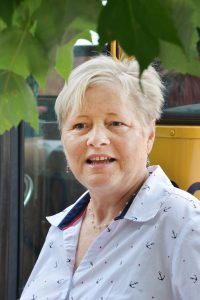 She also has spent the past 28 years making sure meals have been available during the summer to all children in Danville, free of charge.

As she was handing out sack lunches of chicken nuggets, mashed potatoes and green beans to just a few children at Constitution Square one day last week, Patty said, “This is my baby,” referring to the summer meals program.

“It’s an awesome service to our community.” In the summer, any child, up to age 18, can eat for free, Patty said proudly.

Patty said she knows for a fact, “There were kids who depend on schools to get their food.” Sometimes that’s the only meal they get during the day, she said.

At Constitution Square, Patty stood beside the S.S. Admiral Express, which is a retired school bus that was recently converted into a vehicle to deliver meals to children at specific areas all over town.

As some of the youngsters walked up to get their lunch, Patty said, “You’re going to like today’s lunch. It’s chicken nuggets!

“Do you want plain or chocolate milk?” Then she points them to a small red table loaded with ketchup and barbeque sauce packets.

Under the shade trees, kids with their parents or caregivers eat lunch on picnic tables. Afterward, some toss a football and run around the park.

After 30 minutes, Patty and two other food workers take the bus to Longview Apartment complex and set up for more meal deliveries, this time more children quickly line up for their lunches.

Patty greets everyone with a big smile and asks again, what kind of milk they want. When a sleepy-eyed teenager walks up, Patty calls his name and jokes with him, “Have you been in bed all morning?”

Most of the children eat their lunches while sitting on the grass in the bright sunshine. Some of them gather under the shade of a nearby building, and laughter is all around. 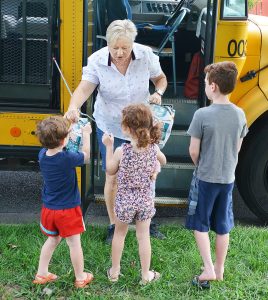 “The concept of offering nutritious meals during the summer to all children, regardless of income, is one that should have the support of all in the community,” Patty said.

When she was first cafeteria manager at Mary G. Hogsett Elementary School and Margie Dievert was the food service director, they recognized the large percentage of students who were on the free or reduced price lunch program. That’s when Patty asked the board of education to participate in the Community Eligibility Provision program.

“It was a bold move at the time. We were part of a pilot program. A few years later, the other elementary schools were included. After Margie retired, our district numbers continued to climb, so I expanded it to the middle and high schools.” Patty said. “ I am proud of our board for supporting this decision. It has been a tremendous relief to many of our families.

“I think it’s the best thing we’ve ever done.”

Patty began her career as the cafeteria manager at Hogsett Elementary School. She worked there until about five years ago, when she took over as food service director for the entire school system.

Patty’s least favorite chore was “being confined to a desk when crunch time comes and there is a report due to the state.”

Her favorite part of the job has been working the kitchen “and then watching the kids enjoy something I have helped create. I usually will work as a cashier during the lunch period. During that time I get to reconnect with the students. I love that hour and half!”

Patty said federal regulations for school lunches have changed over the years — more whole grains are required and more stringent sodium restrictions are in place.

A few years ago, she decided that using disposable plastic eating utensils “wasn’t environmentally cool.” So she ordered “real” knives, forks and spoons.

The problem was that the kids kept throwing them away, so she had to go back to using plasticware. 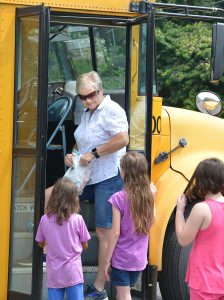 After working in the Danville schools for 29 years, Patty said, “I am inspired by the staff I work with daily. Danville Schools is blessed to have dedicated managers and food service workers. They truly care about the kids they serve. It’s more than just a job, it’s their passion. It has been an honor to serve the Danville Schools for half of my life. I have met some amazing people, loved some wonderful kids and don’t regret one minute spent doing what I love.”