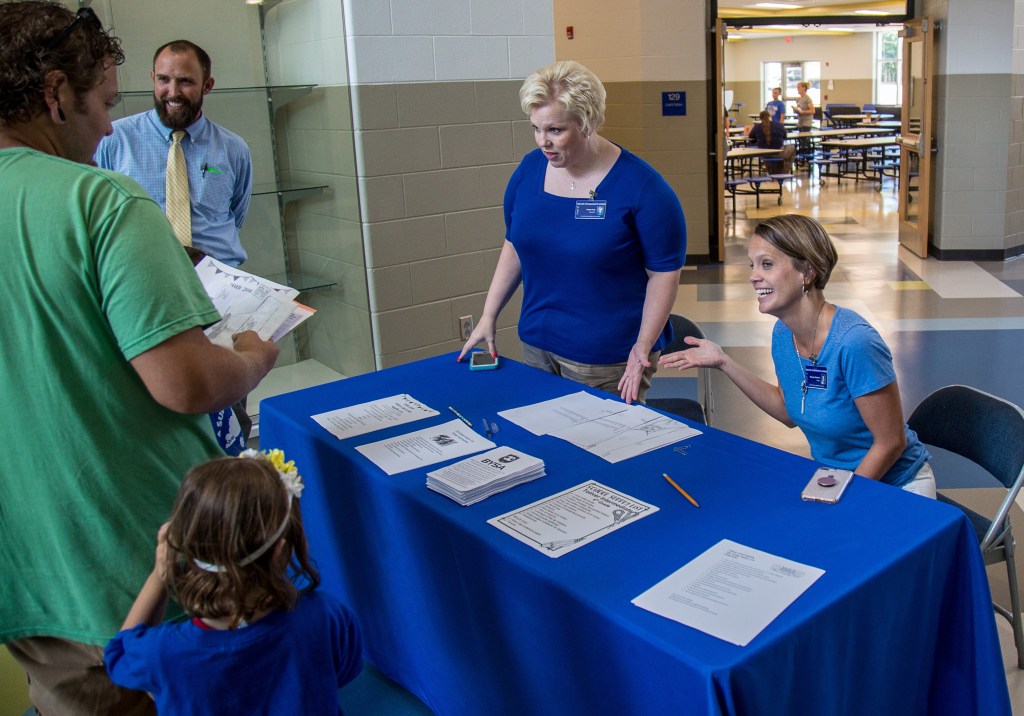 As the first day of school nears, so does the first day ever for Edna L. Toliver Intermediate School. But before that happens, Danville Schools is holding a grand opening for the school on Friday.

The celebratory day begins with a meet and greet with new Superintendent Dr. Tammy Shelton from 1 to 2:30 p.m. The grand opening and ribbon-breaking will be at 3 p.m. on the front steps of the school. And an open house and student-led tours will last from 4 to 7 p.m. 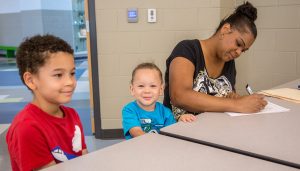 Ben Kleppinger/ben.kleppinger@amnews.com
Ebony Warner, right, fills out registration information at Toliver Intermediate School for her son, Preston, left, who will be in the second grade. Center is her son Lucas, 2.

A groundbreaking for Toliver’s addition was held in March 2016, and the new building was opened to students in the spring of 2017. Final renovations, including replacement of the school’s prominent, massive columns, were completed this summer.

Teachers and staff have been preparing their fresh spaces for students’ arrival for weeks now. Fourth-grade teacher John Collier said his classroom is in good shape; there are just a few finishing touches left to complete.

Collier previously worked as a substitute teacher in the district, a job that gives him a good before-and-after perspective.

“Having subbed here, I saw what it was before,” he said Monday, as he worked in his classroom. “Honestly, you wouldn’t even know it was a new building (and an old one) — they’ve done a good job incorporating the old part with the new part.”

Ross, who is co-teaching with Arnold, said she’s excited for the new school year to begin. It’s Ross’ first year at Toliver — she previously taught at Jennie Rogers Elementary, but Arnold has already been teaching at Toliver. 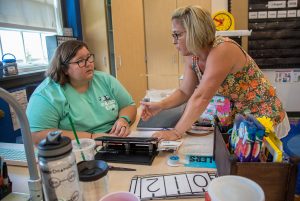 Third-grade teacher Kristy Sigola has been teaching at Toliver for 14 years. She said while her classroom this year is in the original building, you’d have a hard time telling it apart from the new building. She said she likes how the school kept its original doors and windows. She also likes the new cabinetry and the lowered ceilings that improve sound quality.

“It’s like you’re working in a new building that retains some parts of it being old,” she said. “I’m excited for the change just because it’ll be neat to have all the kids in the district together. They won’t have to wait until middle school to get to know each other.”

A grand opening for Edna L. Toliver Intermediate School, 209 Maple Ave., Danville, is scheduled for Friday, Aug. 10. The schedule is as follows:

3 p.m. — grand opening and ribbon-breaking on the front steps