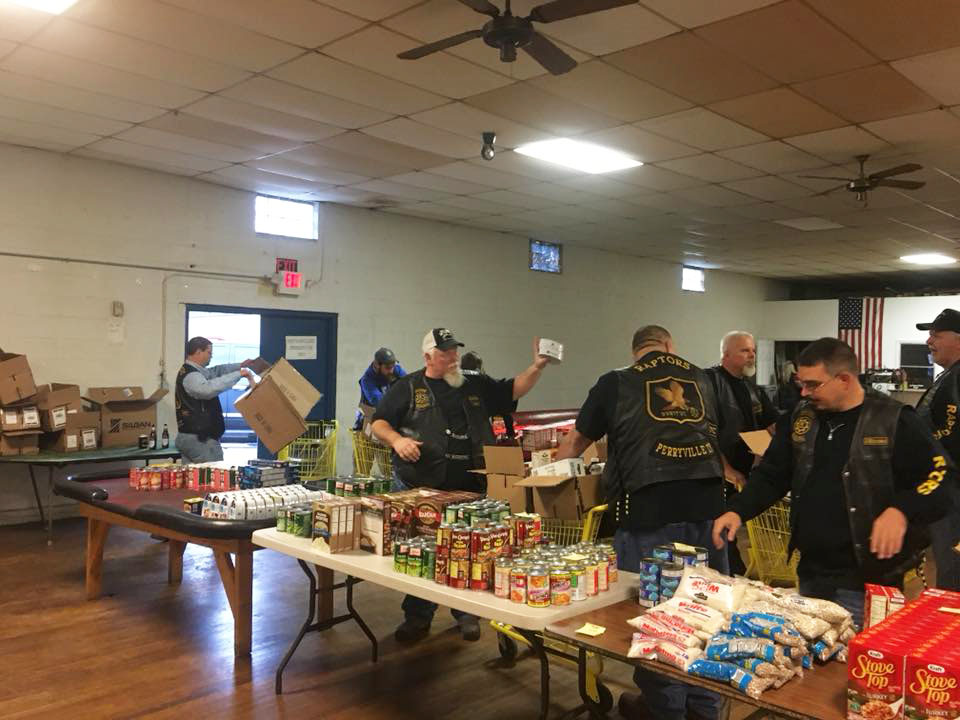 The Raptors Motorcycle Club gets items situated at the American Legion hall in Perryville in December 2017 for its annual food drive. The club works to bring in money to buy food and toys every year for families in need.

The Raptors, a motorcycle club based in Perryville, know it only takes “one bad seed” to give bikers a bad name. And they constantly strive — seeming to succeed — in making sure that doesn’t happen with them.

For the 14th straight year, the club will be working to bring in money for their Two Wheels for Tots program this Saturday, with a poker run, which works to help the area Christmas toy drive that began through the Danville Fire Department.

“They have been our biggest sponsor. We started out helping with the Danville toy drive about 15 years ago,” Perryville Fire Chief Anthony Young said. The Raptors approached the department because they wanted to give back to their community.

“Danville takes in requests from all over Boyle County. That includes Perryville, Junction, Forkland, Mitchellsburg …” Young’s department contacted Danville and got some names of families who had signed up for the program in western Boyle. Young said they started small; they didn’t want to commit to too many names and run out of money.

Hill is president of the Raptors, which have been around as a non-profit for the last 16 years. Along with buying children in a family toys they put on a wish list, they also put together a holiday meal box with all the trimmings. Last year, they bought toys and meal boxes for 33 families.

Any money they bring in, the Raptors keep in an escrow account.

“We had some left over last year, so we went to the Perryville school and they’ve got a program where they take all the eighth-graders to D.C. We told the school, if they had any children who can’t afford to go, we’d use that money to pay their way,” Hill said.

“They’ve been a tremendous asset to us, in helping to make kids’ lives better,” Young said. He said many of the wives of Raptors members’ will volunteer to do the shopping. And the American Legion hall is gracious enough to let them set up there, in order to sort through things.

“We’ve also had people who have suffered a house fire, a job layoff around Christmastime, something drastic in their family life has changed — all sorts of situations that pop up,” Young said. He said because of the Raptors’ help, the department is able to pass that help on to families in those situations.

“And if a family has slipped through the cracks, or they don’t know about the help they can get and how to go about the application process, the Raptors have been super, super good about jumping in to help take care of those families,” Young said.

Something people may not know about the club is how they contribute help within the community all year-round, he said.

“We do give to Boyle County and Danville high schools,” club president Hill said. They normally contribute $500 to each project graduation event, as well as give the bands, for example, money to come help work events — like the poker run this weekend. 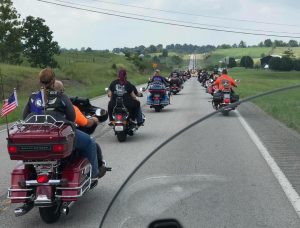 The mass participation in last year’s Two Wheels for Tots poker run the Raptors organize shows a long line of riders. The event brings in money for area families in need, and will hit its 14th year this Saturday. “We’d like it to continue getting bigger and bigger to help more families,” says the club’s president, Bob Hill.

“They’ll be there, working for us, giving out water to make sure everyone stays hydrated. We donate money to them, but we make sure they do some work for it,” Hill said.

At last year’s poker run, there were 268 bikes that joined in — quite a sight to see leaving the American Legion, Hill said. The last ticket is sold for the run at 12:45 p.m., then a prayer is held and instructions given before leaving. Hill said they let everyone know who the medical emergency people are, point out the chase vehicle and explain exactly where the ride is going.

Every year, they hope to beat last year’s record, which means more families to help feed and give toys to in hopes of having a better holiday season, as well as help with other unexpected needs that pop up year-round, Hill said.

Some of the members pass on names of elderly folks who the club will also attempt to help out and bring groceries to. Most of them don’t even ask for help, Hill said, and it’s amazing to see their reaction when it’s delivered. The feeling they get from helping others in need doesn’t compare to anything else, he said.

“And all of the kids we do help — it’s just a good feeling. I know that’s cliché to say, but it’s the truth. When they walk in there a week before Christmas, and they’ve got bicycles waiting for them, whatever it was on their list …” Hill said, and paused. “It’s just amazing.”

Hill said many businesses sponsor the poker run, enabling participants to be up for several door prizes. Several banks have donated $100 savings bonds; the Harley Davidson shop handed over several hundreds of dollars in gift cards; multiple gift cards will be given away for dinners for two at places like Applebee’s and Cheddar’s; whiskey barrels from Wild Turkey; gift certificates from area salons and hairdressers; and the first 250 people will get a free T-shirt, which Ultimate Thunder helped pay for.

“And we’ve had a few years where we’ve had some rain, and as of now, it’s a 20-percent chance, but who knows what will happen by this weekend,” Hill said. Even if it does rain and the ride doesn’t happen, the event will still accept $10 donations, award door prizes and serve a meal, he said.

“And every Thursday night at the American Legion, we have a 7:30 poker game. It’s buy-in per hand, and all of the money goes to the Legion,” Hill said. It’s important to the club the Legion is kept up and running; many of them are veterans or sons of vets, he said. Food and drinks are also sold during the weekly Thursday events.

“I don’t think they publicize a lot of what they do, so I think a lot of times, it goes unnoticed, except for the toy drive,” Fire Chief Young said. “Just the amount of charitable work they do within our community — it’s outstanding.”