Breathing easy: Danville’s smoking ban has been in effect for 10 years 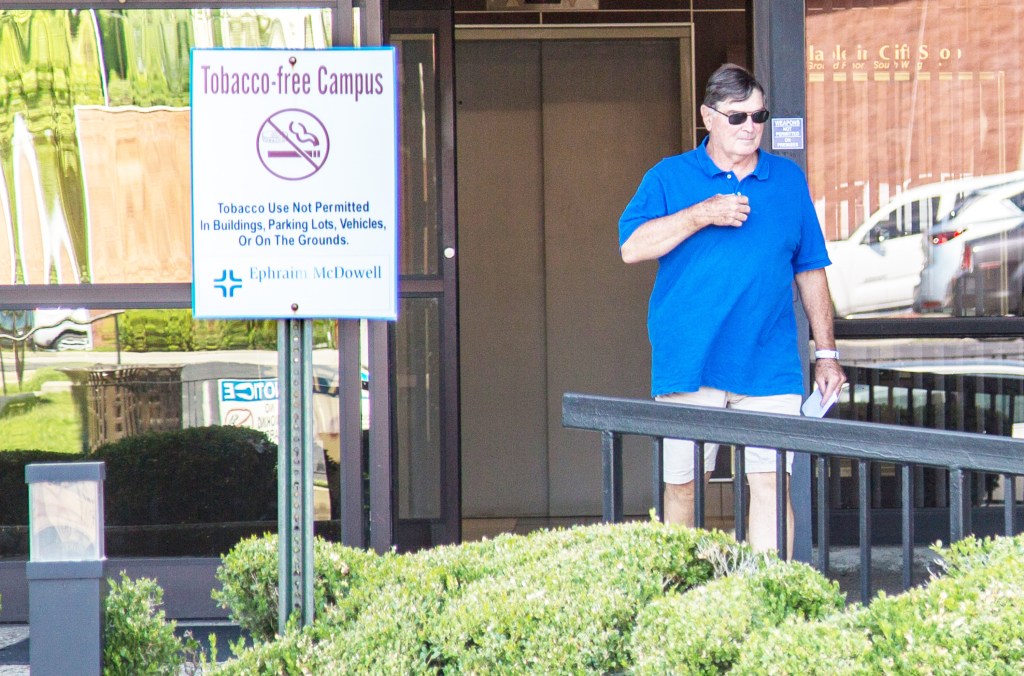 Ben Kleppinger/ben.kleppinger@amnews.com Roger Coyer leaves Ephraim McDowell Regional Medical Center Tuesday afternoon, walking past a sign announcing that the hospital has a tobacco-free campus. Boyle County Health Department Director Brent Blevins attributes Danville passing a smoking ban for indoor spaces 10 years ago with having a "trickle down" effect, leading to further smoking restrictions such as the hospital's total ban on its premises.

Today is the 10th anniversary of the City of Danville’s smoking ban in all buildings and enclosed workplaces.

“Roger really did a great job with that…It’s amazing he got that pushed through the city because the county wasn’t ready,” Blevins said.

Before the ban was put into place, it was common to walk into any Danville restaurant and be asked by the host or hostess, “Smoking or non-smoking?”

“There really wasn’t a ‘smoking section,’” Blevins said. That’s because even when smokers were seated in another area, their cigarette smoke still drifted throughout the room and was breathed in by other diners, their children and the employees.

Trent said it took him and other health educators four years — from 2004 to 2008 — to convince Danville City Commission to pass a smoking ban.

“People don’t realize what a battle it was at the time,” Trent said. “We wanted Boyle or Danville to be the first in Kentucky to have a smoke-free law.”

However, they faced a “backlash from city and county officials” who didn’t want the ban. In the meantime, Fayette County became the first to have the law, Trent said.

Eventually, after an election and new city officials were in office, Trent was able to convince them so they “understood hazards of indoor smoke pollution,” Trent recalled.

When the ordinance came up for approval, “It hinged on one person’s vote.” Once it was passed, “We were very pleased,” he said.

However, “Boyle County is another story,” Trent said. “I tried to get the county to be smoke free.”

But since retiring a few years ago, he’s given up.

“You beat your head against a wall so many times you get tired of doing that.”

Currently, beyond the city limits, smoking is still allowed in any public or private building, office space or workplace, unless the employer enacts their own smoking or tobacco ban.

Trent said there are only five counties in Kentucky that have any kind of a smoke-free policy. “That’s out of 120 counties. We’ve got a ways to go.”

Trent believes Boyle County officials will eventually enact a similar smoking ban as Danville’s. But “it takes persuasion and it takes support.”

In the meantime, smaller cities such as Junction City and Perryville could pass their own versions of smoking bans if they wanted to, he said.

People working and dining in Danville have become accustomed to not having smokers inside buildings. Trent said a few of his friends from here went to Maysville, walked into a bar and were surprised to see heavy gray smoke settling down at about eye level. They just turned around and walked out.

When Trent and others were first pushing for a smoking ban, many residents voiced their opposition.

“I took a lot of abuse,” he said. “People were angry because they didn’t see me as trying to protect their health. They saw me as taking away their rights.”

It is people’s individual right to smoke; but it’s other people’s right to breathe clean air, he said.

Excerpts from letters to the editor in February and May of 2008 include:

“…It is the business of a business whether or not it wishes to allow smoking. What’s next in the minds of those who wish to protect us from ourselves? Is Mr. Trent next going to push an ordinance to prevent restaurants from serving obese people?…”

“… My problem is with those who talk about the health effects of secondhand smoke, and who speak of the health of children, but yet whisk those children off to McDonald’s for a dose of salt, sugar, fat and cholesterol…”

“… As a smoker, I feel it necessary to state the fact that all smokers are fully aware that smoking is ‘harmful,’ and we don’t need this preached to us anymore…”

“…If Danville imposes a ban on smoking, then all smokers should spend their money in other towns. See how long Danville stays afloat then…”

Trent said he was extremely proud that the city commission passed the smoking ban 10 years ago. “Without their votes, it couldn’t have happened.”

In recognition of Danville’s 10th anniversary of being smoke-free, Trent wrote in a letter to the editor, “Three members of the then city commission deserve a great deal of credit for having the courage to pass this ordinance and they are Terry Crowley, Janet Hamner and Gail Lewis. Without their support and understanding of the importance of this ordinance, this effort to improve the health of this community would not have happened.

“As the then chairperson of the Agency for Substance Abuse Policy (ASAP), I along with a large group of local concerned citizens and staff from UK College of Nursing was able to provide information to the commission to encourage them to pass this much needed change in local behavior. Today, I’m glad to report, most people appreciate the clean air in enclosed spaces they frequent.”

Blevins said he thinks this first act of designating smoke-free spaces has had a “trickle down” effect in Boyle County. He said many businesses, including Ephraim McDowell Regional Medical Center, American Greetings and both the county and city school systems are now tobacco-free.

“I will continue talking with fiscal court” about passing a similar smoke-free ordinance for the county, Blevins said. “To me, (Danville’s smoking-ban is) fantastic. It’s one of the greatest accomplishments of our community.”