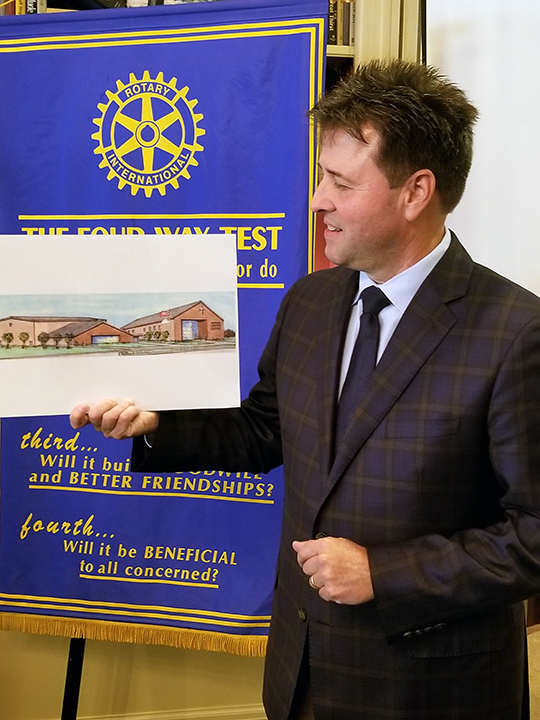 Jim Ward, Headmaster of the Danville Christian Academy (DCA) gave Rotarians an overview Aug. 2 of the many things happening at DCA.

Ward came to DCA in August 2017. His experience includes being a science teacher, technology coordinator, math consultant and principal. After those roles, he served as a district assessment coordinator at the Kentucky Department of Education.

Ward started his presentation by saying he wanted to talk about what’s going on at DCA that connects the academy with the broader local community. But before focusing on the recent activities, Ward provided a brief history of Danville Christian Academy.

In January 2008, through the generosity of many faithful DCA supporters, the property at Shakertown Road was purchased for a future campus. In May 2010 the Board decided to move all classes to the Shakertown campus. The teachers and the Board have much to be proud of in the short time since moving to Shakertown Road:

• dual-credit partnerships with EKU and BCTC;

The theme for the upcoming year is “212 degrees.” At 211 degrees all you have hot water, but at 212 degrees, steam is made and steam creates power. “When we think about 212 degrees, we want our kids to give their best shot every day,” Ward said.

DCA is moving aggressively to offer dual-credit programs in English this year. They are planning on expanding to math and technology. Also, this year, DCA will offer American Sign Language. The idea is to connect DCA students with their counterparts at Kentucky School for the Deaf.

“We want our students to be able to learn from their shared experiences and be able to partner with them.” Ward said.

DCA is going to join the Kentucky Music Educators Association to provide access to a broad offering of music oriented activities. MEA’s professional organization is in place to support the teachers and their students.

Recently DCA started an I-20 program to encourage International student enrollment. All students that study in the United States need a Form I-20 “Certificate of Eligibility for Nonimmigrant Student Status.”  Once accepted, international students will receive a Form I-20 addressing their chosen program of study and purpose for coming to the United States. DCA has just enrolled two Chinese students who speak Mandarin but are very fluid in their English as well. And yesterday DCA received a text from a young woman in Mexico indicating that her F1 visa is ready and she’s coming to our community.

“We also have three other Nigerian students who have been in contact with us and we just don’t know how that will play out yet,” Ward said. “It’s an exciting time.”

DCA is not only experiencing growth in international students, they are also picking up students from surrounding counties. “That’s been interesting because I think that they see the excellence in Danville and Boyle County schools and I include us in that grouping. So we’re excited to be a part of this community,” he said.

To better serve the current and future students at DCA, the school’s leaders have embarked on an ambitious expansion program called the “Warrior Complex.” The facility will include a gymnasium, cafeteria, stage, and art studio and music classroom. These new capabilities will allow school-wide assemblies, on-site PE classes, drama/musical performances, and performing arts instruction.