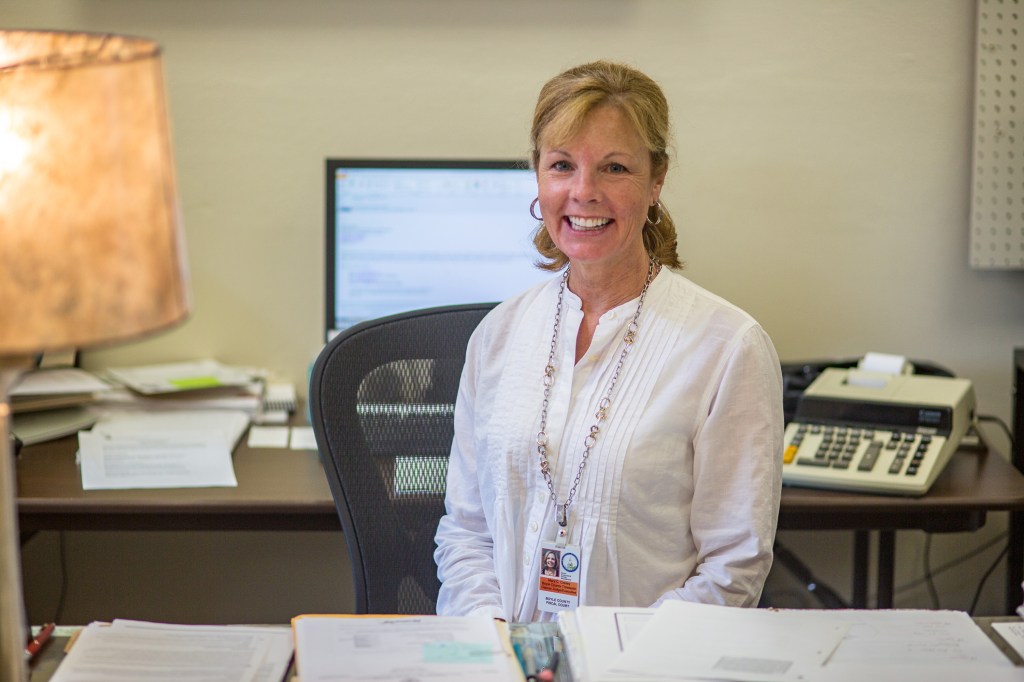 Ben Kleppinger/ben.kleppinger@amnews.com Boyle County Treasurer Mary Conley has been asked to speak at the annual Kentucky Emergency Services Conference on how to appropriately allocate cellphone revenues for 911 expenditures.

The Boyle County Fiscal Court was a “shining star” of bookkeeping in a recently completed state audit of 911 services, and Treasurer Mary Conley has been invited to participate in a panel at the annual Kentucky Emergency Services Conference as a result.

Mike Sunseri, deputy executive director of the Kentucky Office of Homeland Security, asked Conley to participate in the conference on Sept. 5 to help other managers of 911 finances improve their practices for future audits, according to an email from Sunseri to Conley on Aug. 1.

“As you were a shining star from our recently completed audit, I was hoping you would agree to participate in the panel as an example of how PSAPs (public service answering points) should be running their books,” Sunseri wrote.

“I am honored to be asked to participate on this panel. I believe this invitation, besides the audit, was a result of all the conversations that I had with the Homeland Security deputy director and their counsel regarding 911 funds,” Conley said Monday.

Kentucky Auditor Mike Harmon completed an audit of the Kentucky 911 Services Board in June. The organization oversees collection and distribution of 911 service fees assessed on cell phone bills. Harmon was asked to conduct the audit by John Holiday, executive director of Kentucky Homeland Security, after the 911 organization was reorganized by Gov. Matt Bevin, according to a news release about the audit.

“When Director Holiday and his staff realized the former (state 911) board had not been in compliance with the state law requiring biennial audits, they requested my office audit the last four fiscal years to get caught up and give the new board guidance going forward,” Harmon stated in the release. “We found many issues relating to the former board’s expenditures, including missing or inadequate documentation that made it difficult for our auditors to confirm the accuracy of the Board’s accounting during the time period we audited.”

As part of the audit, Harmon’s office looked closely at how the state board’s money was spent at 10 local 911 centers around the state, including in Boyle County. These local centers are called PSAPs. The audit found the state board “did not adequately monitor PSAPs” when it came to making sure cellphone revenues for 911 service were spent legally.

“In nine of 10 PSAPs visited, cellular and landline cost were not prorated based on call volume as required …” the audit states. “Some PSAPs made an arbitrary allocation, such as 50/50 percent or 80/20 percent split, but there was not supporting documentation to justify how those ratios compared to call volume.”

Michael Goins, spokesperson for Harmon’s office, confirmed Boyle County’s PSAP was the only one out of the 10 PSAPs that followed the letter of the law.

“We absolutely did break our payments down by call volume,” Conley said. “We had documentation for the last five years — and beyond — where we obtained the breakdown from the 911 center quarterly and adjusted our payment ratio accordingly. Our budget and associated expenditures … are even broken down by landline and cellular.”

Conley was a vocal advocate for monitoring call volumes and following the law on cellphone revenues last year, as Danville and Boyle County worked through a controversy over funding for the 911 center, which is operated by Danville. The two governments ultimately decided that Boyle County would continue to receive cellphone revenues from the state, then pass them on to the city, under an agreement that Conley said allows for proper documentation to continue.

“We’re where we need to be,” Conley said in November as the agreement was being finalized. “Not only for the auditors, but also for the county constituents, so if they come to my office and ask questions, I’ll be able to produce information and substantiate all of our actions on behalf of the dispatch center.”