Bell, Bartleson eager to take on new role in ‘18 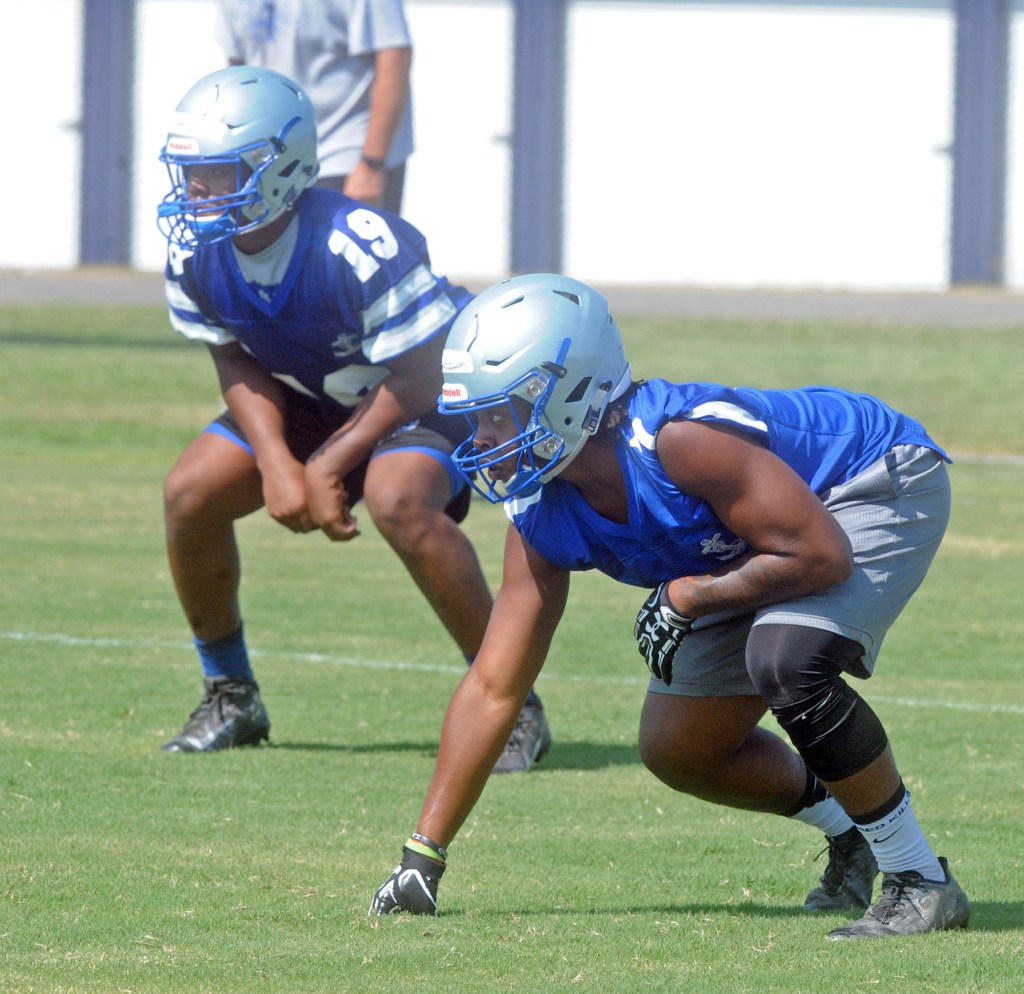 Junior Darrian Bell and senior Kishown Bartleson have each taken on new roles on offense for the upcoming season.

Losing 19 seniors from last season’s state championship squad has brought some roster adjustments for head coach Clay Clevenger and his staff, but Bell and Bartleson are eager for their new roles on offense.

Bell — who was almost exclusively a linebacker last season, leading the team in tackles with 144 — will also play tight end this season. Bartleson went both ways last year, playing on both lines and occasionally at inside linebacker, and will now be primarily a running back and outside linebacker for the Admirals.

“They’ve helped set the tone from January, really,” Clevenger said. “In the weight room they’ve really gotten after it. They worked in the same group all winter long and really challenged each other and helped us push the tempo of the group.”

Their transformations have been unique — Bell’s athleticism has allowed for a smooth transition to tight end, where he was a backup to Jaleel Warren last year.

“On offense he’s filling Jaleel’s shoes, and you can see that he’s been doing real good,” Bartleson said of his teammate. “He probably has the best hands on the team.”

Bell’s hands are what separate him from the crowd at tight end. He doesn’t need gloves to secure a catch.

“You shake his hands and you figure out why,” Clevenger said. “Kind of like Jaleel last year, you shake his hand and your hand disappears. Darrian, he’s still growing. He’s got a big ol’ mitt, and he’s just a competitor. He’s going to go out and do his job and compete, do his job the best he can. He’s a kid that is really fun to coach because he takes it serious and he wants to try to be the best version of himself that he can be.”

Bell said that he knew after Warren graduated he’d be stepping into a larger role on offense this year, but he’s excited for the challenge.

“Going into last year, I knew I was going to have to have the ball in my hands some,” Bell said. “But since we had Jaleel, I knew that I wouldn’t really have to do anything on offense because tight end was my position on offense. So last year was like, ‘OK I can get my reps in on defense.’ This year, I’ll have to do both. Throughout the year I think I’ll have to do some extra conditioning because of that, it’s going to be extra work.
“I’ve always had good hands, but usually I don’t really use gloves. Gloves give you that edge, but since middle school, I’ve never really had to have them to catch the ball.”

Bell has already impressed at tight end in 7-on-7 scrimmages and was strong in the Admirals’ first scrimmage against Frederick Douglass.

“Darrian is a very hard worker, very humble kid, obviously had a great year defensively for us last year,” Clevenger said. “So far, in our 7-on-7s and throwing with other teams, he’s been our big play guy. Not because he’s burning people with speed but just because he competes. He’ll go compete for the football when it’s in the air. I feel like he and Zach (Thornton) are building a good camaraderie there.”

As for Bartleson, he got his first chance to really impress against Frederick Douglass.

“I beat myself up over that, but I learned from it and after that I did good,” he said. “This will be my first year at running back. I’m just trying my best at it, just cover up in traffic.”

Clevenger said he’s done well to take on the role of power running back, a role held exclusively by Don Harris the past two seasons.

Bartleson will also take Harris’ No. 23 this season.

“Last year it was Don’s spot, this year I have to cover that spot, fill in a big role that we lost from last year,” Bartleson said. “This year I knew I’d have to fill some spot. I wasn’t sure what number I was going to wear. I picked 23. Don, he’s always joking about it, saying that I picked a beast number.”

It’s a unique switch for Bartleson — he’s going from the trenches to the backfield. He’s lost 30 pounds from last year, building muscle in the process.

“I lost about 30 pounds, then gained muscle,” he said. “I turned my fat into muscle. It was kind of natural for my body to do that. It was just work in the weight room, extra hard work. Coming into senior year, I just want to be the best.”

That’s rare to see from a lineman, Clevenger said.

“He’s redistributed it. I think once he really got into the weight room, started building up muscle and burning that baby fat, he started turning into a man,” Clevenger said. “As he started doing that, his body transformed so much. In March, we were thinking about losing Don, that physical presence in the backfield, you start looking around at this year’s team, Kishown looks a lot like what Don looks like. We’re anxious to see how that looks moving forward. He’s a kid that hasn’t really been a ball carrier a whole lot in his life, but he’s a good athlete and we’re excited to see what he can do for us.”

Clevenger said that first-carry fumble from Bartleson in the Frederick Douglass scrimmage was a learning experience and something he’ll have to improve.

“Most of the time when you hear about football, kids move forward,” Clevenger said. “They grow into the line, that’s the progression. You don’t see many kids move from the line to running back. So our biggest fear is ball security. That’s something we work on every day, but when you go against some live competition, live bullets, he freaked out the first time someone dove at his legs. That’s something that he’s going to have to get used to, we’ve got to take care of the football or you can’t play that position.

“He’s going to add a physical presence. He’s done a good job running downhill, he gets the tough yards. He’s an explosive athlete. You’ve got a 200 pound kid that’s strong and explosive, that’s hard to tackle. We’ve got a really good sized offensive line. We’re really big and I think we have to understand that we’ll have to try and wear some teams down and be strong in the fourth quarter.”

Bell said his teammate will surprise this season.

The pair have also been asked to be leaders of the team: Both prefer to lead by example but have stepped up vocally this year.

“We’re challenging them to step it up more vocally,” the coach said. “I’ve seen that with Darrian here in the last week, where he’s starting to get on some guys when they weren’t doing what they needed to do. Kishown as well, he’ll say, ‘hey, let’s pick it up,’ those kinds of things. We need that from those two guys.”