“Living on Love” ends Playhouse season with lots of laughs 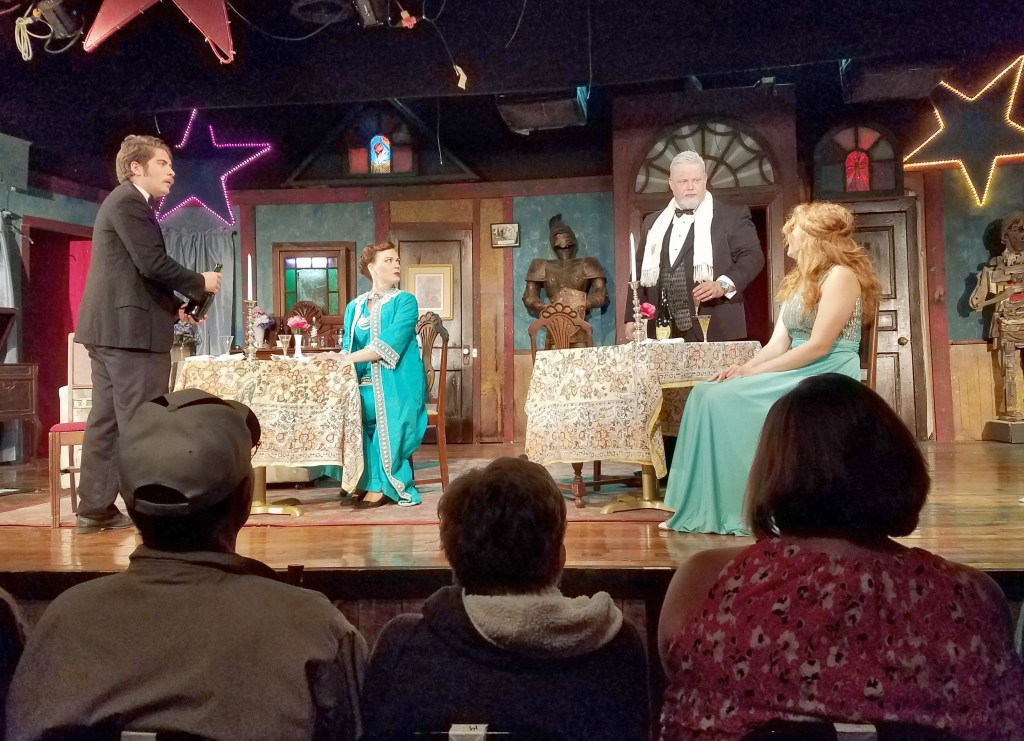 Pioneer Playhouse is ending its 69th season on a high note, both literally and figuratively, with “Living on Love.”

The play is about a pair of celebrity narcissists — a maestro and a soprano — and the two unlucky writers who get tasked with writing about their lives. It takes place in “a glorious Manhattan apartment in 1957.”

When the play first debuted in 2014, the lead role of Raquel DeAngelis was played by opera singer Renée Fleming, whom critics praised for buoying what they saw an otherwise average performance with her amazing singing. In Pioneer Playhouse’s version, it’s Raquel’s husband, Maestro Vito DeAngelis who steals the show.

Eric Seale, who directed “Drinking Habits 2” but hasn’t been in any of the earlier plays this season, rumbles around the stage like a thunderstorm as he portrays the self-important, womanizing maestro.

He has great odd-couple chemistry with Giancarlo Herrera, one of my favorite actors on the stage this summer. Herrera portrays Robert Samson, a mild-mannered writer who is supposed to be ghost-writing the maestro’s autobiography.

If the maestro is a thunderstorm, Samson is a bird caught in the storm. He’s not an unwitting participant, however — he has ulterior motives that soon become clear when Raquel makes her entrance.

Erika Lee Sengstack plays Raquel and, like the maestro, is a force to be reckoned with. She makes grand entrances, sings whenever it suits her and carries around a little dog named Puccini, all while trying to match the schemes of her husband turn by turn.

Iris Peabody (Fannie Lemasters) is the fourth main character in the small, six-member cast. She is a timid editor sent over by the maestro’s publishing company to deliver bad news, but she quickly becomes the maestro’s newest romantic target.

Bruce (Andi Johnson) and Eric (Dalton Graves) round things out as a cartoonish pair of somewhat mischievous butlers. They share a particularly entertaining scene change, which would be nothing more than a pause in the action in other plays. Instead, they dance around the stage in choreographed unison as they set up furniture and props. It may be the first time I’ve seen an audience applaud a scene change.

“Living on Love” is wonderfully messy. Perhaps the funniest scene involves a half-naked Samson pouring olive oil all over his chest. A generous helping of maple syrup is used to great comedic effect in another scene; and water and forks go flying in others.

The play’s script is simple but witty. The real strength of “Living on Love” is in its cast, who execute from curtain to curtain with excellence. This is probably my favorite play of the season. I laughed throughout the performance and kept laughing on the way home.