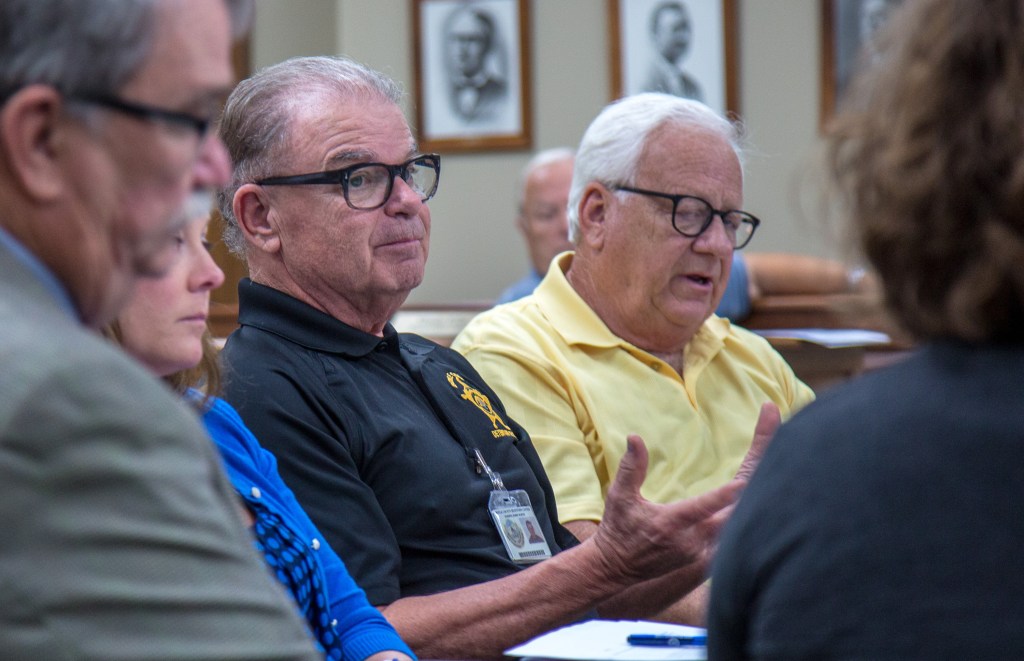 Further results from Boyle and Mercer counties’ comprehensive jail study did not arrive Friday, as had been previously anticipated. No one from consulting company Brandstetter Carroll, which is completing the study for $75,000, was in attendance at the Criminal Justice Coordinating Council meeting or the Boyle-Mercer Joint Jail Committee meeting, which are held back-to-back monthly.

“I thought we were going to hear today from Brandstetter Carroll on what some of their recommendations were,” Boyle County Magistrate Jack Hendricks said. “… I really thought that I heard at the last meeting that they were going to have more definitive results to share with us — not the full results. I’m getting a little antsy as to why we don’t have these folks here every time.”

Jessica Buck, directing attorney for the Department of Public Advocacy’s Danville office, said she talked with Dr. Allen Beck, one of the consultants working on the study, on Thursday, who told her changes already being made to the local criminal justice system are requiring the consultants’ data to be updated so it’s accurate when they present it.

“Our jail population is dropping, so he was saying that he’s taking into account all of the changes that have already been made, and that is taking a little bit longer,” Buck said. “… He said that every time things change, that affects the data and the report.”

“I think it’s changing because everybody in this room is working hard at it,” Hendricks said. “I just don’t see them working hard enough at it to give us answers.”

“Or we could wait,” said Mercer County Attorney Ted Dean. “Be patient. Allow them to get the full data and then give us a complete picture as opposed to a changing, moving target. … My expectation is it’s going to be next month; I think that’s perfectly reasonable.”

Boyle County Judge-Executive Harold McKinney said he also understands the consultants “are having some problems getting some data out of the state.”

“They’ve been in touch with me probably continuously over the past three weeks,” McKinney said. “They think they have it now, but they’re working on that. It’s been tough for them. But it is time — we need something. I agree. Everybody around this table, we need to look at something pretty soon.”

So, instead of reviewing new recommendations Friday, the Criminal Justice Coordinating Council — formed as part of the effort to overhaul the local criminal justice and get better control over the jail’s population — spent around 45 minutes discussing community needs identified by the Boyle County Agency for Substance Abuse Policy (ASAP).

“We have kind of seen the jail issues as reflective of problems in general in the county, and certainly related to substance-use disorder,” said Kathy Miles, coordinator for ASAP. “So we put it on our agenda every month … to look at what’s happening in the jail.”

Based on feedback from 12 individuals who “are very active in the work of ASAP and represent a cross-section of the community,” ASAP came up with a list of facilities, programs and policies that would help the community improve how it handles “substance use education/prevention/treatment/aftercare and enforcement,” according to a survey summary distributed by Miles.

Topping the list is a need for “continued and increased education and prevention programs” to help children avoid beginning to use drugs. The area also needs “sober living” facilities, which Miles said used to be called halfway houses, but that term has fallen out of use. And there is a need for a “short-term crisis unit” that could give people seeking drug treatment or having mental health problems a temporary space to live and a caseworker who would help them find resources and plan for the future, according to the survey.

“The results of the survey reflect a steady change since 2015 toward the need for more prevention and education opportunities for the local community, and a growing concern for the future of children and youth,” the summary states. “Although treatment and recovery remain high on people’s lists, it appears that Boyle county residents are now realizing the importance of long-term  change in reducing addiction in this county for the long haul.”

Members of the CJCC said there are plans for sober living facilities in northern Garrard County and in western Danville.

Mercer County Jailer Bret Chamberlain said he has been working to help open the Garrard County facility, which will be at a church in Bryantsville and open for 10-15 female clients. It could begin accepting clients as soon as September, but definitely by October, he said.

“I’ve been waiting for it for many, many years and then bam — just all of a sudden” everything is coming together for the project, Chamberlain said.

The group also discussed the possibility of hosting an “expungement clinic,” which would make it easy for people hoping to have criminal records expunged learn if they’re eligible and how to complete the expungement process.

Public defender Buck said when a public defender’s office handles an expungement through such a clinic, it doesn’t cost the normal $500. A $40 fee for Kentucky State Police to certify a case does still apply.

Commonwealth’s Attorney Richie Bottoms said he’s seeing expungements come across his desk regularly — sometimes multiple times a week. He has never rejected one, in part because KSP has already certified whether each person is eligible under the law for expungement before the case comes to him, he said.

Buck said the process for getting an expungement is complicated — “I would say it’s almost impossible to do by yourself.” Every misdemeanor conviction is capable of being expunged, but a person must have a squeaky clean record — not even a speeding ticket — for five years, she said. Each person can have only one felony expunged; they must similarly have kept a clean record for five years, but minor violations like speeding tickets won’t prevent felony expungements, she said.

Buck also told the CJCC that “we need to have a true drug court” — something also identified by ASAP as a need.

Boyle and Mercer counties’ court system is one of very few in the state without a drug court in place.

According to the Administrative Office of the Courts, “Kentucky Drug Court was created in 1996 to assist individuals who have entered the criminal justice system as a result of drug use or drug-related criminal activity and are choosing to achieve and maintain recovery. Drug Court combines close court supervision and treatment with other services to intervene and break the cycle of substance abuse, addiction and crime.

“… Today there is irrefutable evidence that Drug Court is achieving what it set out to do — substantially reduce drug use and criminal behavior in drug-addicted offenders. For more than 20 years, the program’s solid track record has convinced leaders in state government, along with local judges, prosecutors and treatment providers, that Drug Court is an essential part of the Kentucky court system.”

Buck said she is a relative newcomer to Boyle and Mercer counties; she came from Hardin County, where there is a circuit drug court and a district drug court.

“It really makes a huge difference to people being successful after they are” involved in the criminal justice system, she said.

Buck said that’s probably because drug court is designed to be implemented at the circuit-court level first.

“I’m not aware of any jurisdiction that receives money to have a misdemeanor drug court that didn’t already have a felony drug court,” she said. “Because that is what drug court was originally created to do is to address the felonies.”

Circuit Court Judge Darren Peckler has declined to participate in the CJCC and ordered the other judges in Boyle and Mercer not to participate, according to previous comments by Boyle County Deputy Judge-Executive Mary Conley.

“He said he wouldn’t allow (local judges) to serve, but I told him I would like to keep them in the loop,” Conley said in November as the CJCC was getting up and running. “So he said as we go through the process, he would be interested in any information that was created through this group.

“… He was pretty adamant that there would be no (participation from judges) … He thought it was putting he and his office in a possibly litigious situation. If something happened, that he didn’t want to have to be sued and be sitting on a committee that would get sued. I didn’t quite understand.”