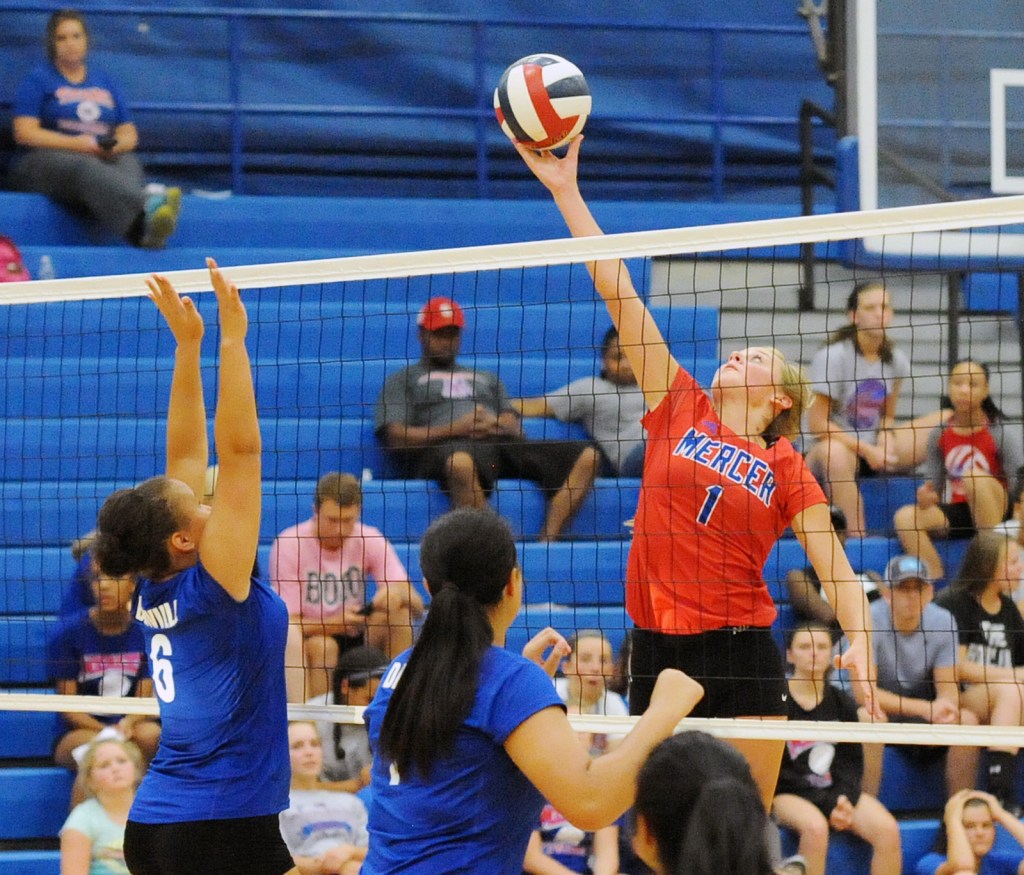 Five sets and 221 points were required to separate Mercer County and Danville Tuesday on the volleyball court.

Mercer County rallied from a double-digit deficit in the first set to win 26-24, setting the stage for a thrilling match.

“That was one of the most fun matches that I think I’ve ever coached,” Danville head coach Maggie Myers said. “This team is very young and they are just starting to believe that they are capable of winning sets, winning matches. Seeing that, that thought process develop and seeing them battle for every point, trying to play consistent whether we were ahead or behind, that was a very rewarding and fun thing to see as a coach.”

In the first set, Mercer junior Brinkley Prewitt served the Titans to a comeback victory.

“It was a hard fought game,” Mercer head coach Lynn Flach said. “Brinkley Prewitt had great leadership and in the first game we were losing 15-24 and Brinkley served the remainder of the game for Mercer to win.”

Myers said that Prewitt’s serving is what turned the first set.

“I believe that’s when the tables turned,” she said. “We are having a hard time developing consistency in our match. What I’ve noticed is that we build a lead and back off. When we play from behind, we tend to give up. I think that we had a 10-point lead that they just took for granted, that at some point Mercer County would make an error. But Mercer doesn’t make a lot of errors. Lynn is a great coach and they know what they’re doing.

“In that situation, her girls understand that volleyball is won one point at a time and lost one point at a time. There’s no deficit that is impossible to overcome in volleyball. They played like it, they chipped away. I had two timeouts when we were up 10, burned them both. I think that was a hard lesson that we were going to have to learn, you can’t go to sleep on any team.”

To Danville’s credit, the young Admirals didn’t give up. The Ads rallied to win the second and fourth set to force all five sets.

“We are getting there. We are so young,” Myers said. “My starting lineup is one junior, one freshman and all sophomores. They are still developing chemistry with one another, sometimes there’s miscommunication errors that I hope we’ll eliminate as the season goes along, as they learn how to play with the person next to them. Chemistry we’re still building, but it’s a huge element that will come. That’s just experience, getting competitive touches on the ball side by side.”

Those will come with time, Myers said — and the Admirals certainly showed spirit with their comeback. Other areas of the game — like unforced errors, of which Danville had 29 — will come through practice.

“There are still some skill areas we need to work on, we’re still slow in transition,” Myers said. “That’s something that we will work on in practice and get better as the season goes on. We had some service errors when we were trying to gain the momentum back, and that’s a typical trait of young players, they have a hard time managing that situation.”