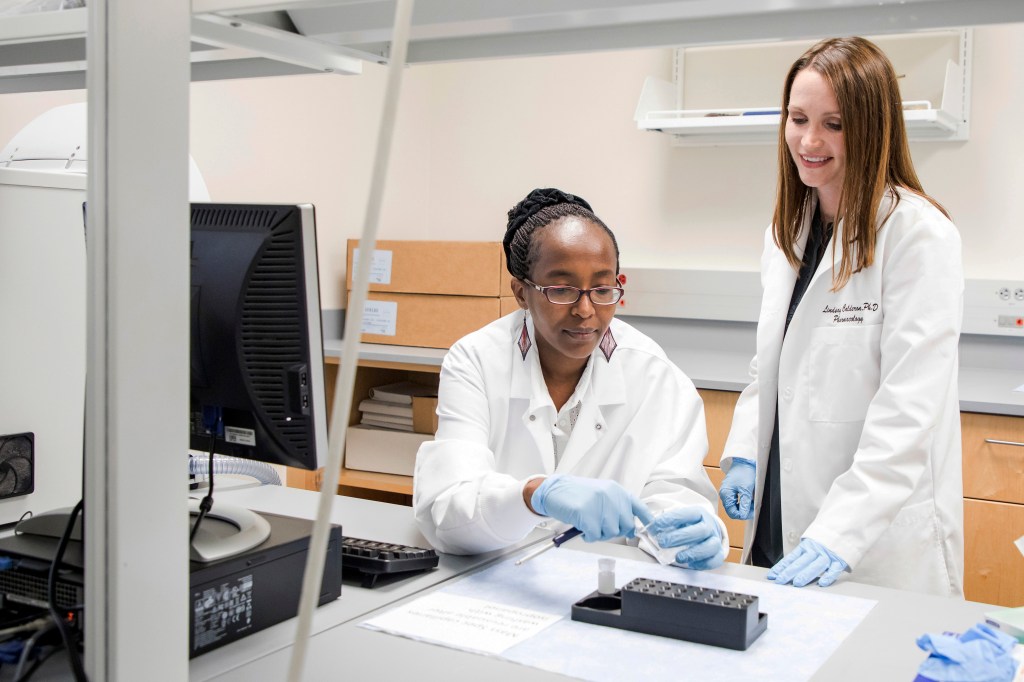 For Dr. Lindsay Calderon, associate professor of biological sciences, and Dr. Margaret Ndinguri, associate professor of chemistry, the patent is the culmination of painstaking and time-consuming research that merged two academic disciplines, capitalized on the University’s state-of-the-art new Science Building and involved the assistance of dozens of EKU undergraduate and graduate students.

“Our mission was to develop new methods of combining compounds that are attracted to and target cancer cells for the purpose of detection or the delivering of chemotherapeutic agents,” explained Ndinguri, whose specialty is synthetic chemistry. “Our main goal is to improve the survival rate of cancer patients, while reducing the side effects currently associated with chemotherapy.”

The duo’s compound selectively targets the cancer cells that have elevated hormone receptor LHRH. That includes breast, prostate and ovarian cancers, as well as various non-reproductive cancers such as lung, pancreatic and bladder. The compound has been tested in animals that were inoculated with stage 4 triple-negative breast cancer, one of the most aggressive and invasive forms of cancer with no effective treatment.

Approximately 250,000 new breast cancer cases are diagnosed annually, with a mortality rate of approximately 16 percent, according to the National Cancer Institute. Despite recent advances in the first-line treatment of breast cancer, many patients eventually relapse and succumb to the disease as their tumors become resistant to chemotherapy. The survival rate for stage IV breast cancer remains low – approximately 23 percent.

“We are the on the leading edge of science to synthesize and improve current cancer stats by providing a personalized therapy,” said Calderon, whose academic specialty is pharmacology. “We took a very utilitarian drug that is given to many people, and made it ‘smart.’ More of our drug gets into the cell, and that will provide a higher cytotoxicity to the cancer cells while sparing many of the body’s normal healthy cells.”

Even with the patent, the research continues. The professors’ discovery has been selected for a National Institutes of Health cancer screening program, where it will be judged against 60 cell lines of cancer. “We’re hoping this will provide information regarding just how far reaching our compound is to various cancer types,” Calderon said.

The patent for Calderon and Ndinguri is a source of pride for many reasons. Because EKU is primarily a teaching institution, it’s not often that research on the Richmond campus results in a patent. The faculty duo is also deeply aware that their achievement comes in a male-dominant field and positions them as role models and trailblazers for females of all ages. Most of all, though, they are happy for all the EKU students who benefited from the opportunity to participate in such important work.

“The bigger picture here is that our undergraduate students learn that they’re capable of doing meaningful research, and that we’ve got the skill set here at EKU to do it,” Calderon said, noting that many use such experiences as a stepping-stone to prestigious graduate and professional schools.

The successful project, which was aided by years of grants from the Kentucky Biomedical Research Infrastructure Network (KBRIN) and the University, which served to “build up the biomedical infrastructure” at EKU, they agreed, and opened the gates for faculty colleagues.

“We want to be leaders for developing corresponding administrative routes for pursuing this type of research,” Calderon said.