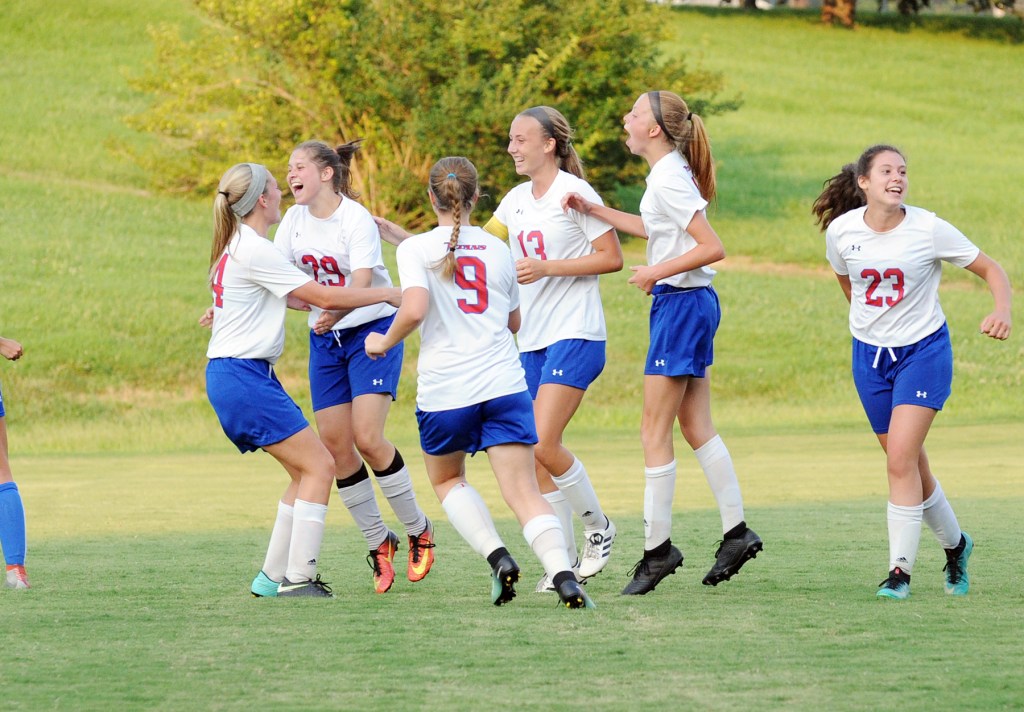 It was a 12th Region semifinal rematch, and it was another winning result for Mercer County.

The Titans visited Danville Monday for the first girls soccer match of the season for both teams, winning 1-0 thanks to a goal from Kaley Woods in the final three minutes of the game.

Mercer County dominated possession in the first half and rattled the frame of the goal, but Danville goalkeeper Grace Gaffney and her defenders did well to keep the Titans off of the scoresheet early.

Mercer head coach Josh Culver said he was happy with the way his team possessed in the first half but said shots have to be better.

“We have been working since April, we’ve been out here all summer and we’ve just focused on constant fundamentals, moving the ball and making sure we’re just making runs for one another, working as a team,” Culver said. “I will say that every player on that field tonight for us worked as a team. There was no one person that did it all, it was everybody working together. It’s paid off, all the work they’ve put in.

It was scoreless at halftime, thanks in large part to the Danville defense. The Admirals had a few of chances to score in the first half but couldn’t convert.

“We’ve talked a couple times this preseason about our defensive positioning and I was really happy with what I saw there tonight,” Danville head coach JD Smith said. “I would’ve liked to have seen us close down on some of those longer shots a bit quicker, not giving up so many of those, but I did like how we were positioned.”

“I think we’re still trying to figure ourselves out a bit as well,” Smith said. “You’ve got some girls on this team that are either playing brand new positions, young players stepping in — we’ve got two freshmen starting. I think it’s a little bit of just trying to figure ourselves out. But I’m happy with what I saw, we created opportunities. We get some of those to go and it’s a different situation.”

Danville was the aggressor at the beginning of the second half — the Admirals kept Mercer pinned in its own half and wouldn’t let the Titans possess the ball.

“Danville came out very strong defensively in the second half, they were looking to push, press, they sent us in the defensive half and we weren’t ready for it, they came out strong,” Culver said. “We’ve just got to be ready in the second half, no matter what it is. The score is what counts, possession doesn’t do everything.”

Smith said his focus at halftime was an improved energy up the field.

“I thought we came out with better energy,” Smith said. “We had the mindset that we didn’t just want to sit back and defend, we wanted to go after them. That’s how we should want to play all the time, but I think a little bit of it is, as a team, we need to gain the confidence to do that. We’ll take some positive things from this game and that confidence will build.”

But as the half wore on, Mercer worked its way back into the game, culminating in Woods’ shot at the top of the box that flew over Gaffney’s left side for a goal.

“I’m very happy with how we get back as a team and how we mark up towards the midfield.” Culver said. “Then when we look to win the ball, we’ve learned to quickly spread out, maintain possession and we’ve found open pockets and spaces. That’s something that I’ve been working with them on for two years now.

“You’ve got to constantly move, you can’t stand still. The most important person in soccer is the player without the ball because they’ve got to be moving for that player with the ball. I’m very proud of them tonight, they just kept at it and it has paid off. Hopefully we can work on finishing, put more balls in the net.”

Smith said that his team grew into the game and expects his team to grow into the season.

“You’ve got some girls that are taking on leadership roles that they have to get used to, too,” he said. “I think as the first game of the season, it’s not the result that we want but I liked the way that we played and this is a really good place for us to start from. We’re going to learn a lot from it.”