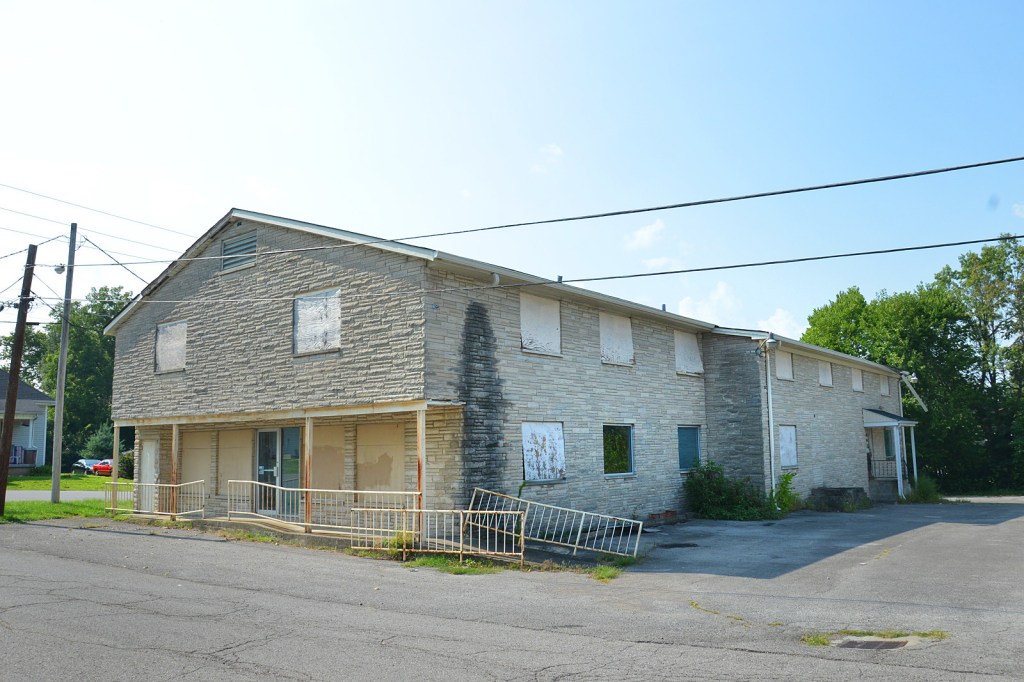 Robin Hart/robin.hart@amnews.com This building facing Sycamore Street at the corner of Beech Street has been purchased by Seeing Hearts Transition Home Inc. The corporation's president, Andrew Wilkinson, is requesting a conditional use permit to use the facility as a home for men who have completed their jail sentence and need help transitioning back into society. A public hearing will be held at 10 a.m. Thursday at Danville City Hall.

Organizers of Seeing Hearts Transition Home Inc. will be appearing before the Danville-Boyle County Board of Adjustments’ public hearing on Thursday for their request of a conditional use permit for a residential transition home on Sycamore Street. The property is currently zoned as GR-B (general residential/small lot).

According to The Seeing Hearts Transition Home application submitted to the board of adjustments, the existing building will be used as a “6- to 12-month residence for men returning to society after having completed an incarceration sentence at either Boyle County Detention Center or Northpoint Training Center.”

Seeing Hearts plans to provide room and board (rent will be charged once employment is found); job placement and transportation assistance; weekly support classes; health insurance procurement; ministry outreach to spouses, children and families; and community outreach, according to the application.

Andrew Wilkinson, founder of the home, said it will not be a clinical in-house treatment center, nor be used in lieu of finishing a jail sentence.

It will be a home for only men who have completed their sentences, who may still be on parole and who have “illustrated accountability for their crimes … and exhibited a sincere desire to change and have taken advantage of their resources” while in jail. For example, if they have earned their GED, taken vocational training, participated in addiction treatment classes and attended support groups, they may be accepted into the home, Wilkinson said.

“We will try our prayerful best to seek the ones who are trying.”

He said he will interview prisoners who apply and are about three to four weeks from completing their sentences. He will also read their files to see what kind of prisoner they have been.

“We believe they’re not lost causes,” Wilkinson said. “They need a home” to start their lives over.

If the conditional use permit is granted, Wilkinson said the faith-based residential facility will be home to between 14 and 16 men. Each person will have their own private room, but they will share bathroom facilities. There won’t be a full kitchen; the facility will have a refrigerator and microwave so residents can fix simple meals such as ramen noodles or heat up frozen foods.

They will have one meal a day as a group, Wilkinson said — probably breakfast when they will also have a devotional and prayer.

Once employed, their rent will be between $200 and $300 a month, Wilkinson said. “It is a part of life and being employed.”

He also plans on having volunteers come to the home and lead Celebrate Recovery classes, Bible studies and practical life management lessons, such as how to follow a budget, balance a checkbook and how to have a successful job interview.

Wilkinson said the home will be a place to help men get back on their feet spiritually, economically and emotionally. Hopefully many will rebuild their family relationships too, he said.

“We’re going to get the boot of life off of their neck,” he said.

Wilkinson said he went door-to-door and hand deliver a letter to residents in the neighborhood on Sycamore and Beech streets about two weeks ago explaining what his plan for the empty building was.

Most people were supportive, he said. A few had concerns and questions: Yes, the men will have a curfew; there will be outside video surveillance; and security lighting will be added.

“This is going to be a very professional home,” Wilkinson said. All of the rooms will be fully furnished and everything inside and outside of the building will be clean and organized.

“There’s not going to be any blankets in the windows” or guys standing outside all day smoking cigarettes, he said.

Wilkinson said he envisions the home’s residents earning their neighbors’ trust and credibility by helping out with neighborhood projects.

“That’s going to be a huge part of our success,” he said.

Wilkinson wants to provide support to the men getting out of jail because he was once in their shoes.

He is the son of former Kentucky Gov. Wallace Wilkinson and grew up being known as “the governor’s son or the business man’s son,” Wilkinson said.

His father’s financial success allowed him and his brother, and mother to lead a very comfortable life.

However, his dad filed for bankruptcy and the family’s complete devastating financial collapse happened almost overnight. Then his father died.

Wilkinson said he convinced himself that he was “a victim of life” and used it as an excuse to use drugs and alcohol to escape. “It was a very dark time.”

Eventually, he was arrested and spent one year in a Florida prison for possession of narcotics.

Riding in a prison van on his way to be incarcerated “was the low point of my existence,” he said. So he decided to say a prayer. “It was the first sincere prayer of my life.”

While in prison, he met many people who wanted to make their lives better once they got out. “I have a proper understanding that many, many people on the inside are not lost causes.”

Wilkinson said his faith has shown him how he can help others get their second chance the way he had.

“They don’t have all the stuff and resources I had,” when he was trying to get back up on his feet.