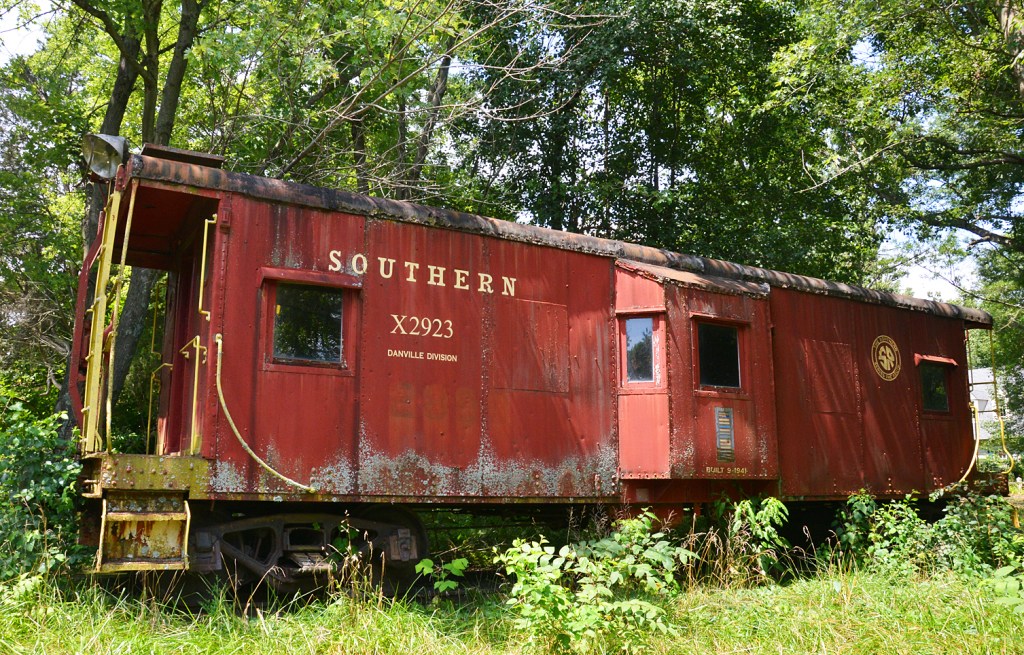 An old red caboose owned by the Danville-Boyle County Industrial Foundation is going to be part of an economic development project for Ravenna in Estill County.

According to the KSHC website, its Kentucky Rail Heritage Center project was announced in May, when CSX Transportation partnered with KSHC “to purchase a large tract of decommissioned ex-L&N rail yard in Ravenna for economic development.”

CSX no longer has a major impact in the Ravenna area and its involvement in the project is a show of goodwill to the residents in eastern Kentucky, said Chris Campbell, president of KSHC and Harrodsburg resident.

“CSX is allowing us to create a rail heritage center which will also teach rail skills to people in the area and get them into the workforce,” Wartman said.

Campbell said KSHC is investing in the Ravenna area in hopes of having a positive economic impact with railway tourism.

He said the center will focus on Kentucky’s “industrial path” involving railroad history and the three major railroads — Southern, L&N and Chesapeake & Ohio.

BCIF’s contribution of the caboose is the first rail car donation to the non-profit organization.

To make the donation even more special, the caboose is “one of only two remaining of its kind,” Campbell said. “It’s extremely rare.”

Before the Industrial Foundation took possession of the land the caboose sits on, the train car was owned by Bob Lawson, an enthusiastic model train collector, according to news archives.

According to a sheet of paper tacked up on an interior wall, Lawson wrote, “About 35 years ago, it was given to the Danville Police Department to house ammunition for weapons training. About five years ago it was offered to Judge Harold Burks. His wife wisely said, ‘NO’ in her backyard, so Harold asked me to store it for him.”

The caboose is number X 2923 and was in the first run of steel cabooses on the Southern Railroad.

According to the page, it was “built for use where ‘helper’ service was needed and track sidings were scarce, causing the helper locomotive to be pushing the caboose behind the train. After several wood cabooses were crushed, the mechanical department decided to convert some box cars into cabooses. There were 50 built at one time using a boxcar structure.”

Wartman said the center’s largest industrial building will be where train restoration projects — like Boyle’s caboose, along with other steam locomotives and railroad cars — happen. Visitors will be allowed to watch skilled workers bring back these vintage, massive pieces of machinery back to working condition.

As a result of the workshop, job training opportunities specifically designed for potential railroad employees may also benefit residents who want to continue employment with a railway company.

The rusty caboose from Boyle County will undergo a series of dismantling, sandblasting, welding and painting jobs. “It will be a teaching instrument” for people who want to work for the railroad, Wartman said.

The caboose will be restored completely to its original condition, Wartman said. However, a specific timeframe for its move from Danville to Ravenna and its restoration depends on the pace of donations, he added.

Campbell said they expect moving costs to be between $8,000 and $10,000 and a fund-raising campaign will begin soon. They hope to have the caboose moved within the next four months.

Not only will the center provide job training opportunities, it will also give tourists first-hand experiences of railroad history.

The KSHC website said the Rail Heritage Center, “Will be a living restoration shop, showcasing the rehab and maintenance of historic steam locomotives. The sprawling campus will creatively integrate a rail-based tourist attraction featuring train excursions with recreational space, technical skills training component and a regional community center with restaurants, shops and lodging.”

When the donated caboose is fully refurbished it will be “sort of a time capsule,” Wartman said.

Inside components such as kerosene lamps, hand rails and marker lights will be added. The original coal-burning stove is missing its top half and a replacement will have to be found somewhere, Wartman said.

Also missing from what the caboose was originally fitted with is a hatch that held a 32-volt battery. This will definitely be replaced, Wartman said. Back during its working days, men riding in the caboose may have plugged in a radio or used the battery to run display lights on the back of the car to signal the yardmaster if another train was following or if it was the last car on the track.

Wartman said railroad artifacts may be displayed in the caboose once restored, depending on how the KSHC decides to utilize the car. The caboose could be part of an actual train excursion, or it could be put on display.

“I’m thrilled about it. It’s going to a great final home,” said Cindy Ellsworth, an Industrial Foundation board member who spearheaded the search for someone who wanted the caboose. “… I sure as heck didn’t want it to go to a scrap yard.”

She said after meeting with some of the KSHC representatives, she saw they knew a lot about trains and had a passion for their preservation.

When the KSHC group came to Danville to inspect the caboose, “They were like kids in a candy store,” she said.

To find out more about the Kentucky Steam Heritage Corporation go to: www.kentuckysteam.org