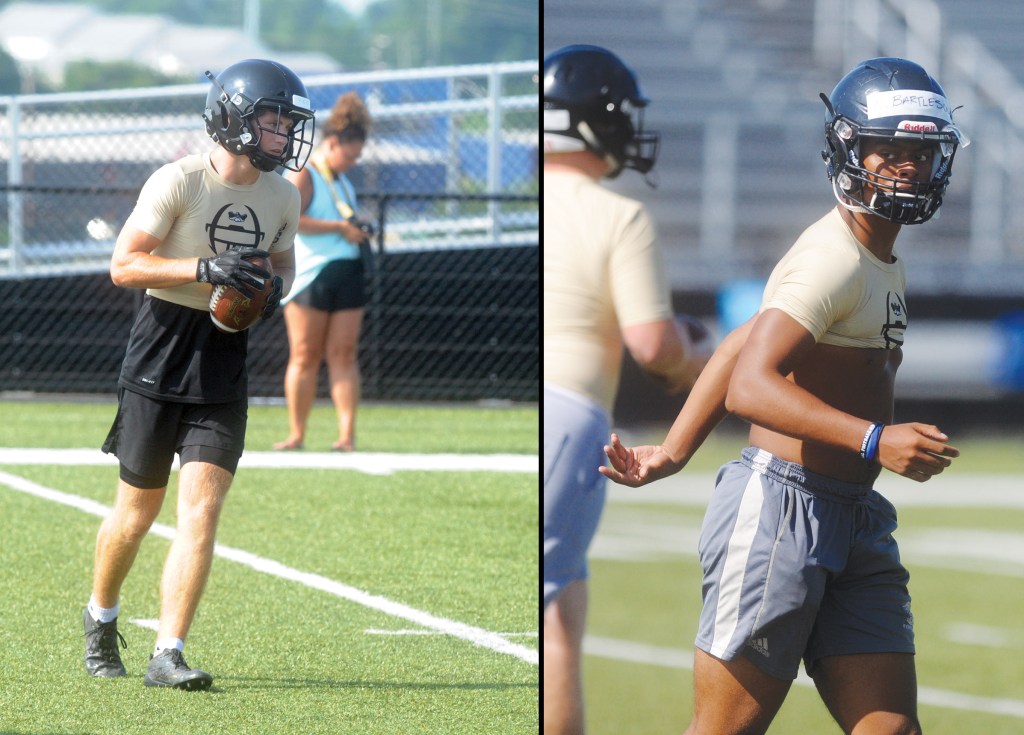 Reese Smith (left) and Landen Bartleson (right) each have four Division-I scholarship offers after a busy summer of camps and recruitment.

The two juniors at Boyle County are used to competition, but this summer they saw that competition increase. Both Rebels competed in multiple states at college football camps, and both reaped the rewards: Each player has four Division-I scholarship offers.

“There is a lot of pressure because it is kind of like your job pretty much, it’s your interview,” Bartleson said. “Every rep, everything counts. Even if they’re not looking, everything is recorded at camps. It’s a lot of pressure, but it’s just a blessing to be there because not everybody gets those opportunities. Once you go, you’ve just got to do you.”

And both players have shown out at camps. Bartleson crushed a 4.39 40-yard dash at Ohio State during a camp. Reese Smith has also cut his times and earned all four of his offers at camps he attended at those schools.

“They’re looking for people who are worth a scholarship, worth $200,000,” Smith said. “They aren’t going to put a scholarship offer on somebody that’s not worth it. When you go, they’re evaluating everything you do. The way you walk, your body language, your attitude. When you go there, you have to be on your A-game.”

Smith said the most fun he had at a camp was at Troy — where Boyle County graduate Neal Brown is head coach.

Why? For the competition, of course.

“Probably the most fun I had was at Troy, it was down south,” Smith said. “There was a bunch of athletes. We talked to coach Brown after the camp was over, before he offered me and he said there were at least 25 D-I athletes on the field there.”

Bartleson said it was a unique experience at every camp he attended — he went to four in total: Nike Football The Opening, Vanderbilt, Michigan and Ohio State.

“For me, it really varies on where I go,” Bartleson said. “Everybody is coaching you and just the atmosphere at every college is different. Some schools I liked more than others. I’ll say, I liked Ohio State. I liked it up there. Michigan was pretty nice too.”

“They’ve went to several camps this summer and impressed coaches so much to get offers,” coach Smith said. “They’re very legit players, they’ve worked really hard. I think their commitment and dedication has paid off for them. I think college coaches are recognizing that and want them on their team.”

Hard work for each player has taken a different form.

For Smith — who broke two fingers at the end of basketball season — he’s had to work harder due to that time off in the weight room. He’s also taken on a new hobby to gain an advantage: Yoga.

“I went for the first time, I was like, ‘ehhh, I’m not too happy about it,’” he said. “But after, it cleared your mind, you’re more relaxed and I noticed that my times went down, I started getting faster. I just had to keep going, I started going once a week. Everything just started flowing after that, I could tell that my body was more relaxed when I was running my routes, my hips opened up. Flexibility for sure, but clearing your mind is a big part, too. You focus on you and it’s all about your improvement.”

Bartleson also missed time during the spring due to an illness that sidelined him for most of basketball season — December through February.

It was a painful time for Bartleson because he said he felt like he fell behind other athletes.

“I felt like I fell back,” he said. “I felt like I got passed up, so I just took it personal and tried to bounce back. As much work as we do, just a week throws everything off.”

Smith and Bartleson grinded lifting weights while running track in the spring, culminating in a state track and field championship in Class 2A.

“They’ve both gotten stronger in the weight room,” coach Smith said. “Then they’ve done a good job in track, track has helped them with their speed, too. They’re running better and the name of the game is speed in college. You’ve got to be fast to be good and that’s what they’re proving in these camps.”

Another aspect that helps the Rebels: Name recognition.

Both Smith and Bartleson said that coach Smith’s history at the University of Kentucky helps them in practice. During events, putting on a Boyle County shirt carries its own weight.

“He’s been at the SEC level,” Smith said. “Everywhere you go, you put on a Boyle County shirt, it doesn’t matter where you’re at, they say, ‘Boyle County, coach Smith.’ Everybody knows who he is. He’s put several linebackers in the NFL. For him to come back is really special and he’s helped us out with colleges.”

Coach Smith said that coming from Boyle County helps the players, but at the end of the day they’re the ones that have performed.

“I think at the end of the day, I think colleges know our program and they like the way our kids play the game of football,” coach Smith said. “That helps, that goes a long way, but at the end of the day the players have to prove that they can help the college team win, before they make that commitment to them and make that scholarship offer. But those guys have done the work.”

Coach Smith had great things to say about each player and how they can perform at the next level.

“Landen, he’s obviously fast but has really fast feet and he has a really strong lower body,” coach Smith said. “He does a great job in the weight room, strong in his squats and explosive. I still think he’s going to get better. He’s good now but he’ll continue to get better. What I’ve noticed this year is he’s really worked on his vision. He’s really practicing in drills on making people miss and he’s practicing reading his blocks, anticipating a hole opening. Then he’s got the speed and explosiveness to hit it and become a big-time player.”

Bartleson goes both ways but is being recruited for his outstanding skill at running back.

Smith is different — his coach says his versatility is a plus for colleges.

“I think he would be a great inside receiver,” coach Smith said. “He’s fearless, he’ll catch it over the middle or with people on his back. He goes and gets the ball, he’s very explosive. He can jump extremely high. He’s got an explosive lower body and tremendous hand-eye coordination. He’s a great athlete, he can control his body to go get the football no matter where it’s thrown around him. I think he can be an inside receiver in college, I don’t think he’d be outside. I also think he can play as a defensive back, and that’s one of the things that makes him really valuable, he can go two ways. When you’re recruiting somebody and they’ve got two options for you, it makes them that much more attractive.”

“We’re tickled to death, they’re both not only really good football players but they’re fine young men who represent our program really well,” he said. “As long as they continue to work the way they are, more good things will continue to happen for them.”

The Rebels have a huge test this season in their bid to repeat as 3A state champion. It’ll be particularly challenging for Smith and Bartleson after their successful summers.

“There’s a lot of pressure that comes with it, too, because now, the only way is up,” Smith said. “Everybody’s got you on their radar, so you can’t sit back and not work. Everybody knows who you are, you just have to keep working. It’s a blessing.

“I think that’s what strives us to keep working. People you see that say they want to take us down, that is just what drives us on the inside because we don’t go down easy. That’s what drives us to just be better than what we already are. Nobody likes losing and me and him definitely don’t like losing.”

“Everybody is going to be coming at us,” he said. “That’s good, that’s fine. I’m ready for it and I feel as a team we’re ready for it. We don’t have that senior class that we had from last year, so a lot of our juniors have to pull that leadership. I’d say that’s probably the biggest impact on the field for us, just that leadership as a whole.”

Coach Smith said that challenge will be a motivating factor for each player — and the Boyle County team as a whole.

“Their challenge this year is that it’ll be harder to do what they did last year,” coach Smith said. “They’re both going to have targets on their back. Everybody’s going to go into games saying, ‘this guy is a Division-I player, let me defend him. Let me cover him, let me go against him. I’m going to prove that I’m one too.’ They’re going to get everybody’s best, every single play of every single game. Last year I think people didn’t know much about them, but that won’t be the case this year. They better be ready to play every game.”

They’ll be ready. The two will have competition no matter what because they’ll be competing against each other.

“When Landen came here, we just connected,” Smith said. “We were lifting and stuff, we started being really good buddies. That’s what he was talking about, in the weight room, we pushed each other, see who can do more weight, stuff like that. Even on the field, we play a different position on offense, but defense we’re both DBs so we see who can get more picks, stuff like that, who gets more tackles. Who’s going to put up six first? Even the running part at the end of practice, it’s back and forth.”